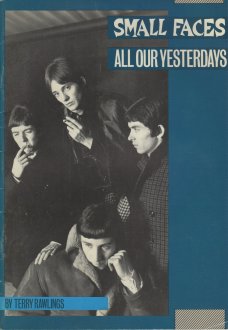 The Small Faces was and is one of my favorite Beat/Rock groups from the Sixties.

Small Faces were an English rock band from London. The group was founded in 1965 by members Steve Marriott, Ronnie Lane, Kenney Jones, and Jimmy Winston, although by 1966 Winston was replaced by Ian McLagan as the band’s keyboardist.

The band is remembered as one of the most acclaimed and influential mod groups of the 1960s. With memorable hit songs such as “Itchycoo Park”, “Lazy Sunday”, “All or Nothing”, “Tin Soldier”, and their concept album Ogdens’ Nut Gone Flake, they later evolved into one of the UK’s most successful psychedelic acts before disbanding in 1969. After the Small Faces disbanded, with Marriott leaving to form Humble Pie, the remaining three members were joined by Ronnie Wood as guitarist, and Rod Stewart as their lead vocalist, both from The Jeff Beck Group, and the new line-up was renamed Faces, except in North America, where this group’s first album (and only their first album) was credited to Small Faces. This practice has continued on all subsequent North American reissues of the album to this day. 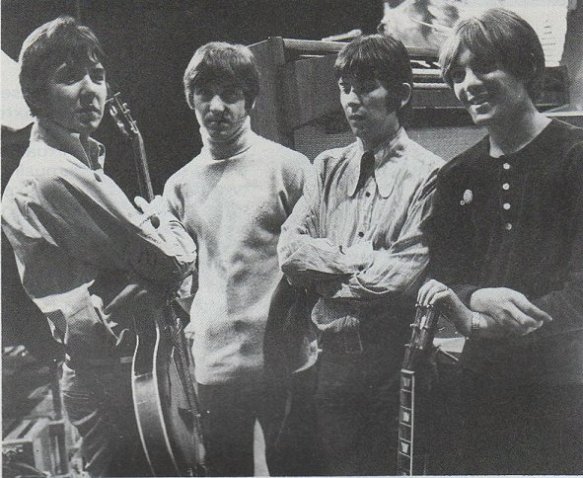 A revived version of the original Small Faces existed from 1975 to 1978.

Small Faces are also acknowledged as being one of the biggest original influences on the Britpop movement of the 1990s. Despite the fact the band were together just four years in their original incarnation, the Small Faces’ music output from the mid to late sixties remains among the most acclaimed British mod and psychedelic music of that era.

This 7″ x 10″ magazine (52-pages) style softback book is packed with photos, a breakdown of their career (till 1969) & an illustrated discography. 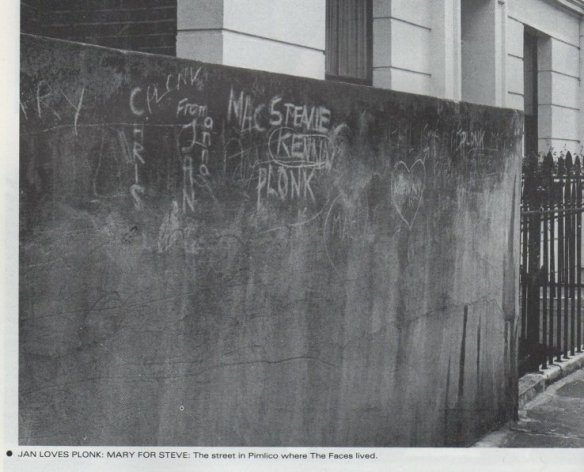 Nothing went right when the Small Faces regrouped for old times’ sake (and a few quid, too). Founding bassist Ronnie Lane quit when recording started, bickering with original producer Shel Talmy left the band adrift, and the album appeared when punk audiences didn’t give a hoot about four mods with a glorious past. What else went wrong? Well, the songs fall shy of the old glories, all right, but they’re not without their charms. Most of them sound half-finished and half-baked: some stronger production would have been wise. Then again, since nobody made any pretense of a band effort, Jones, McLagan, and Marriott could follow whatever individual obsessions they wished. This laissez-faire policy naturally yielded mixed results. “High & Happy” is a ramshackle opener, though its brazen lyrics (“Let’s outrun the 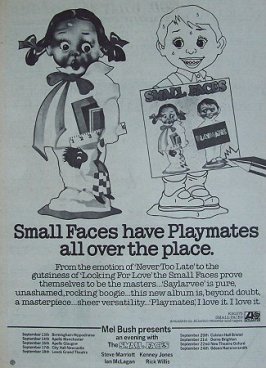 constable, Jack, and do another line”) show the train wreck that Steve Marriott’s life was becoming. The only cover (“Lookin’ for a Love”) is surprisingly perfunctory for such a soulful group, and Marriott’s voice also cracks to alarming degrees on his Elvis-cum-country weeper “Saylarvee.” Some decent moments manage to triumph over the problems. McLagan and Marriott collaborated effectively on the R&B ballad “Never Too Late” and the low-key closer “Smilin’ in Tune,” which effectively lays out the older, world-weary Small Faces viewpoints. “Find It” and “Drive-in Romance” milk different sides of that signature funky organ groove to good effect, and “This Song’s Just for You” is a nice low-key country ballad. “Playmates” itself best sums up the group’s mood: gutsy, but resigned (“We could dance and sing/Now all we have are memories to pass on”). In the end, only hardcore fans will care one way or another, although to be fair, this was probably the best album that the band could muster at the time.(by Ralph Heibutzki) 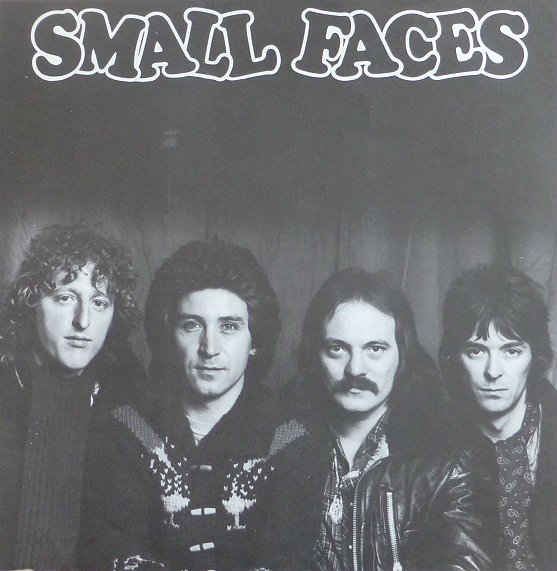 This is a very rare sampler from 1978 released by London Records (I guess this album should promote their “Collectors Edition; in this edition London Records published many samplers of British acts like “Savoy Brown”, “Ten Years After”, David Bowie, “Them”, John Mayall or “Thin Lizzy” amongst others.

Listen and enjoy this music, from the days when we were young … Reflections of my life … And songs like ” Watcha Gonna Do About It”, “Long Tall Shorty” or “Tobacco Road” stands the test of time ! And maybe it´s time, to discover this period of music again … who knows ? 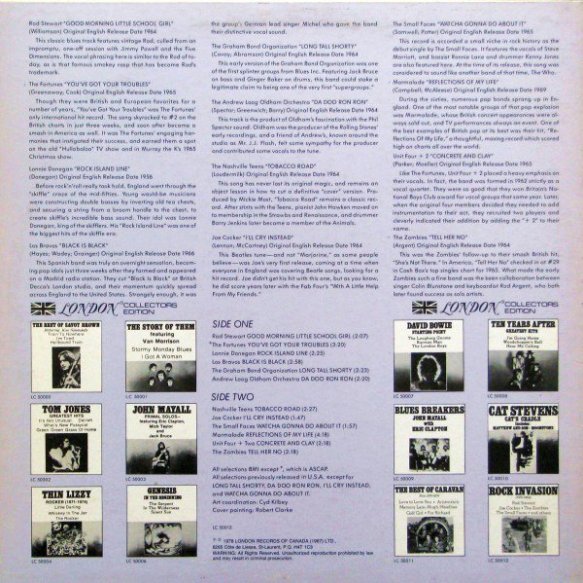