In 1983, Philip “Snakefinger” Lithman was in the middle of a promising career as the go-to guitar player for all things weird. His totally original helter-skelter guitar lines graced many of the records released up to that time by the eyeball-headed Residents as well as a few albums under his own name, and he was collaborating with artists as diverse as The Mutants and ex-Captain Beefheart keyboardist Eric Drew Feldman. So what drove him to abandon all that and create a lecture-demonstration covering the history of the blues?

In his liner notes to the original vinyl release (newly expanded by promising music to include nine previously unreleased cuts) he bemoans “…our present situation, where technology is art and the artist just the poor slob that pushes the buttons” and calls our attention to the blues: “Music full of the life force, that stands on its own, crude and powerful, and played by musicians, not mechanics.” The blues was Lithman’s first love, and the lessons he learned from masters like Robert Johnson, Buddy Guy, and the three Kings (Freddie, Albert, and B.B.) always informed all his work, no matter how outside he may have taken it. Every note he played dripped feeling as well as technique, tradition as well as originality.

In his typical idiosyncratic fashion, he put together a band from every nook and cranny of San Francisco music except the blues scene: Feldman had just wound up his work with Beefheart; Steve Mackay had recently moved to town after years with Iggy Pop & The Stooges; Richard Marriott and Josh Ende were recruited from the neo-dance band Club Foot Orchestra; Raoul N. DiSeimbôte was a pal of the Residents and active on the theater and comedy circuits; and Miguel Bertel and Johnny “Bonghit” Ryan were mainstays of Lithman’s touring band. This motley crew somehow congealed into a tight machine capable of following the leader through any number of blues styles, all fastidiously honoured but by no means slavishly reproduced.

After a few warm-up dates in the Bay Area, Rough Trade (England) put together a tour for the group that criss-crossed Europe several times over six weeks. Two of the shows smack dab in the middle, when the band was at its tightest but not yet burned out, were recorded for release by Rough Trade Deutschland. The results are a heart-stirring, mind-blowing, booty-shaking hour of all manner of blues, from the tender acoustic guitar of “If You Haven’t Any Hay” to the swinging “You Upsets Me, Baby”, from the hard rock of “Crosscut Saw” to the cool jazz of “Stolen Moments”, from the aching “(If I Could Just Go Back) Ten Years Ago” to the exhilarating “Natural Ball”.

This is an album that will surprise die-hard experimentalists, delight blues aficionados, illuminate newcomers, and please just about anyone with a pair of ears.

Reissue of Snakefinger’s 1984 LP, which was originally released on Rough Trade and includes nine previously unreleased tracks. The guitar master who cut his teeth with eyeball-headed avant-garde masterminds The Residents and English pub rockers Chili Willi & The Red Hot Peppers took a break to revisit his first love, the blues, with an eight-piece band, captured live and smoking.

In 1983, Philip “Snakefinger” Lithman was the go-to guitar player for all things weird and as well as recording his own albums he collaborated with The Mutants and ex-Captain Beefheart keyboardist Eric Drew Feldman.
Snakefinger’s musical roots, however, were in the British Blues scene of the 1960s but for this project, in typical idiosyncratic fashion, he put together a band from every nook and cranny of San Francisco music.

The results are a heart-stirring hour of all manner of blues, from the tender acoustic guitar of “If You Haven’t Any Hay” to the swinging “You Upsets Me, Baby”, from the hard rock of “Crosscut Saw” to the cool jazz of “Stolen Moments”. 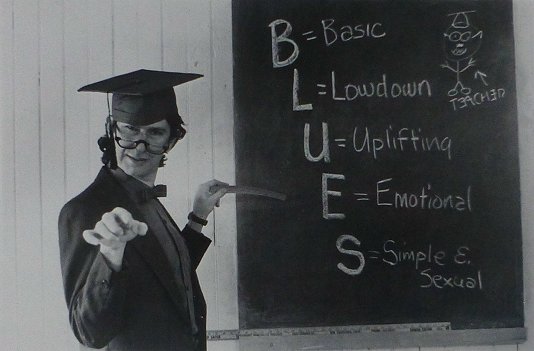 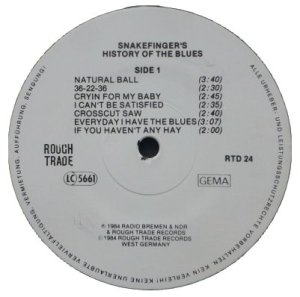