Getz Au Go Go is a live album by American saxophonist Stan Getz and his quartet, featuring bossa nova singer Astrud Gilberto. It was recorded during two concerts in 1964 and released on Verve the same year as V6-8600. (by wikipedia)

Although the name Stan Getz (tenor sax) was initially synonymous with the West Coast cool scene during the mid-to-late 1950s, he likewise became a key component in the Bossa Nova craze of the early 1960s. Along with Astrud Gilberto (vocals), Getz scored a genre-defining hit with the “Girl From Ipanema,” extracted from the equally lauded Getz/Gilberto (1963). While that platter primarily consists of duets between Getz and João Gilberto (guitar/vocals), it was truly serendipity that teamed Getz with João’s wife Astrud, who claims to have never sung a note outside of her own home prior to the session that launched her career. Getz Au Go Go Featuring Astrud Gilberto (1964) was the second-to-last album that he would issue during his self-proclaimed “Bossa Nova Era” — the final being Getz/Gilberto #2 [Live] (1964) concert title from Carnegie Hall. 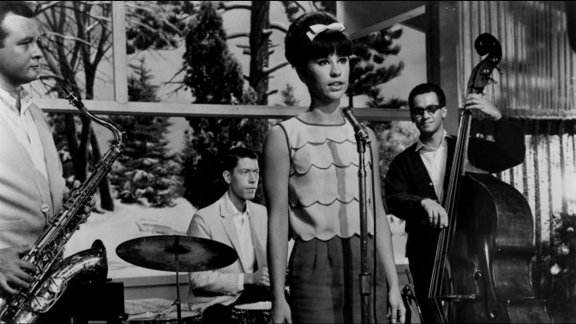 In many ways, that is a logical successor to this one, as both include the “New Stan Getz Quartet.” The band features a young Gary Burton (vibraphone), Kenny Burrell (guitar), Gene Cherico (bass), and Joe Hunt (drums). As is typical with jazz, there are a few personnel substitutions, with Helcio Milito (drums) and Chuck Israels (bass), respectively, filling in on nearly half the effort. As the name of the disc intimates, this recording hails from the venerable Greenwich Village venue, the Café Au Go Go, in mid-August of 1964 —

two months after “Girl From Ipanema” became a Top Five pop single. However, the focus of Getz Au Go Go steers away from the Brazilian flavored fare, bringing Astrud Gilberto into the realm of a decidedly more North American style. That said, there are a few Antonio Carlos Jobim compositions — “Corcovado (Quiet Nights of Quiet Stars)” and “One Note Samba” — both of which would be considered as jazz standards in years to follow — as well as the lesser-circulated “Eu E Voce.” Getz and crew gather behind Richard Rodgers and Oscar Hammerstein’s “It Might as Well Be Spring,” and the scintillating instrumental “Summertime,” from Porgy & Bess. Other equally engaging cuts include affective vocal readings of “Only Trust Your Heart,” and the diminutive, yet catchy “Telephone Song.” There is also some great interaction between Getz and Burton on “Here’s to That Rainy Day.” Getz Au Go Go is highly recommended for all dimensions of jazz enthusiasts. (by Lindsay Planer)