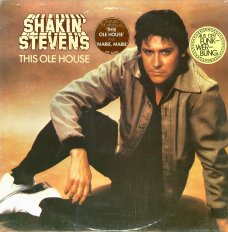 This Ole House is a 1980 album by Welsh rock and roll singer Shakin’ Stevens. The album was originally released under the name Marie, Marie but failed to chart. When “This Ole House” reached No.1 in the UK Singles Chart the album was re-issued in March 1981 with the new title and song added, peaking at No.2 in the UK Albums Chart.

The album was originally released in October 1980 on the back of his first top 20 hit “Marie, Marie”. However, his next single “This Ole House” became a much bigger hit, peaking at No.1 for three weeks in March 1981. The album was quickly re-issued with the same cover but now under the title This Ole House. It peaked at No.2, giving Stevens’ his first top ten album. It spent 28 weeks on the UK Charts and was certified Gold by the BPI. The album also contains earlier singles “Hey Mae” and “Shooting Gallery”.

“Marie, Marie” is a song by Dave Alvin and his band The Blasters, released on their album American Music.

“This Ole House” replaced the song “Two Hearts” (later titled “Two Hearts Two Kisses”) from the original album. The album retained most of the same musicians from the Take One! album, with the addition of Welsh guitarist (and ex-member of Stevens’ previous backing group the Sunsets) Mickey Gee. (by wikipedia)

The album that opened the door to Shaky’s upcoming dominance of the U.K. in the 1980s, Marie Marie catches him still poised between the “vintage” rocker he used to be and the family friendly superstar he would become. The hits “Marie Marie” and “This Ole House” echo deliciously with the ghosts of idols past, and further highlights “Slippin’ and Slidin’,” “Shooting Gallery,” and “Baby If We Touch” establish the album as very much the son of its predecessors. And there can be few higher recommendations than that! (by Dave Thompson)