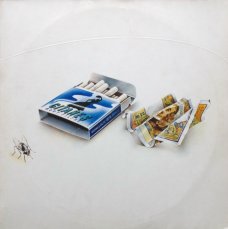 Stomu Yamashta (or Yamash’ta), born Tsutomu Yamashita (山下勉, Yamashita Tsutomu, 15 March 1947), is a Japanese percussionist, keyboardist and composer. He is best known for pioneering and popularising a fusion of traditional Japanese percussive music with Western progressive rock music in the 1960s and 1970s.

In the latter part of the 1970s, he led the supergroup “Go” with Steve Winwood, Al Di Meola, Klaus Schulze, and Michael Shrieve.

Yamash’ta was born in Kyoto, Japan on March 15, 1947. He entered to study at the Kyoto Academy of Music in 1960.[2] His father was the director of the Kyoto Philharmonic, and he became a percussionist in the orchestra when he was 13. He studied music at Kyoto University, Juilliard School of Music, and Berklee College of Music, and has also lectured in music. His innovation and acrobatic drumming style earned him many accolades. In the 1960s he performed with Thor Johnson, Toru Takemitsu, and Hans Werner Henze amongst others. He changed his name from Tsutomu Yamashita to the phonetic Stomu Yamash’ta and in 1969 gained worldwide recognition during a concert with Seiji Ozawa and the Chicago Symphony Orchestra. Time reviewed the concert declaring ‘the star of the evening was Stomu Yamash’ta who stole the show with his virtuoso performance’, and when it was over the audience gave him a five-minute standing ovation.

At the turn of the 1970s he worked with Peter Maxwell Davies and brought the Red Buddha Theatre company from Japan to Europe, acting as their director, producer and composer, writing and performing in the multi-media event The Man From The East, with Morris Pert’s Come To The Edge providing the musical backing.

He has composed for the British Royal Ballet; contributed pieces from his albums to the Nicolas Roeg film The Man Who Fell to Earth (starring David Bowie); performed in Peter Maxwell Davies’s score for Ken Russell’s The Devils and in John Williams’ score for Robert Altman’s Images (1972). He has also composed film scores. His Space Theme was used by the BBC on The Hitchhiker’s Guide to the Galaxy.

Stomu Yamash’ta also appears in the last episode of Tony Palmer’s All You Need is Love: The Story of Popular Music. 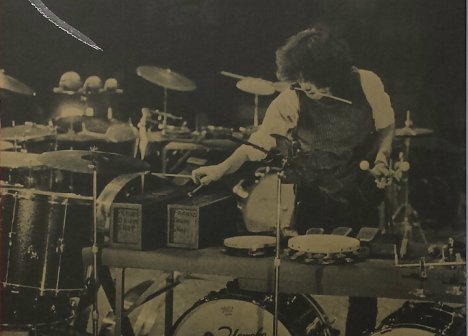 Originally known as Tsutomu Yamashita, most of his albums for Western audiences use the name “Stomu Yamash’ta”, though some (such as Go and Raindog) use the name “Yamashta” (without the apostrophe).

Go Live from Paris is the second album by Go, recorded live in Paris at the Palais des Sports on 12 June 1976. (by wikipedia)

The primary difference when comparing this live performance and the rendering simply titled Go (1976) is that Go Live From Paris (1978) presents the proceedings (as they exist) in a properly linear fashion, as correlated to the Eastern mythology that informed the extended two-part suite. This is in direct contrast to Go, which assembled the contents out of sequence. The stage show was recorded at the Palais Des Sports in Paris, France on June 12, 1976 and the recital setting allows for considerably longer and more exploratory interaction amongst Stomu Yamashta (percussion/piano), Steve Winwood (vocals/keyboards) and Michael Shrieve (drums). 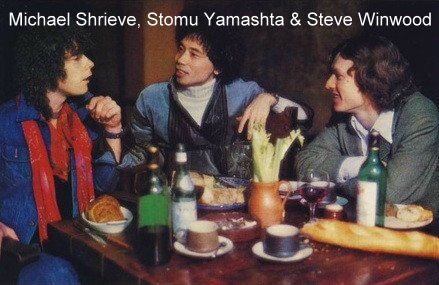 They are joined by legendary jazz axeman Al DiMeola (guitar) as well as Tangerine Dream and Ash Ra Tempel veteran Klaus Schulze (synthesizer) — all of whom had contributed to Go. Filling out the band are Jerome Rimson (bass), Pat Thrall (guitar), Brother James (congas) and Karen Friedman (vocals). In terms of sheer intensity, it is hard to beat DiMeola’s searing leads and Winwood’s blue-eyed soul on the driving “Ghost Machine,” easily topping its former incarnation. “Surfspin” lands into the funky mid-tempo “Time Is Here” highlighted by Karen Friedman’s expressive exchanges with Winwood, while Rimson punctuates the rhythm with some penetrating bass interjections.

This is followed by the sole Winwood composition “Winner/Loser,” which further exemplifies how the spontaneity of the concert yields results that best their predecessors. In fact, on the whole the material on Go sounds like a blueprint for the exceptional and inspired outing found here. The second movement commences with fairly even renditions of the trifecta “Solitude,” “Nature” and “Air Voice” — which had previously been given the name “Air Over.” “Crossing the Line” is an additional zenith, spotlighted by Winwood’s emotive vocals and the untamed and otherwise incendiary frenzy of fretwork courtesy of DiMeola. Clocking in just shy of a quarter-hour, “Man of Leo” provides another opportunity for the players to loosen up and fuse their collective improvisations behind DiMeola’s intense soloing and the similarly seminal instrumental offerings from Shrieve, Rimson — who is at his most melodic — and Freidman’s haunting warbles. (by Lindsay Planer) 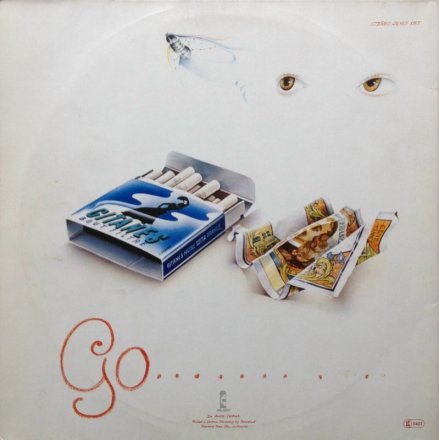