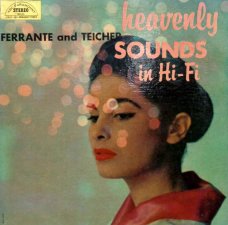 Ferrante & Teicher were a duo of American piano players, known for their light arrangements of familiar classical pieces, movie soundtracks, and show tunes, as well as their signature style of florid, intricate and fast paced piano playing performances.

Arthur Ferrante (September 7, 1921, New York City – September 19, 2009), and Louis Easyronounced as TIE-cher) (August 24, 1924, Wilkes-Barre, Pennsylvania – August 3, 2008) met while studying at the Juilliard School of Music in New York in 1930. Musical prodigies, they began performing as a piano duo while still in school. After graduating, they both joined the Juilliard faculty.

In 1947, they launched a full-time concert career, at first playing nightclubs, then quickly moving up to playing classical music with orchestral backing. Steven Tyler of Aerosmith relates the story that in the 1950s the two students practiced in the home of his grandmother Constance Neidhart Tallarico. Between 1950 and 1980, they were a major American “easy listening” act, and scored four big U.S. hits: “Theme From The Apartment” (Pop #10), “Theme From Exodus” (Pop #2), “Tonight” (Pop #8), and “Midnight Cowboy” (Pop #10). They performed and recorded regularly with pops orchestras popular standards by George Gershwin, Jerome Kern, Cole Porter, Richard Rodgers and others. In 1973, they did the Hollywood Radio Theater theme for the Rod Serling radio drama series, The Zero Hour.

The duo also experimented with prepared pianos, adding paper, sticks, rubber, wood blocks, metal bars, chains, glass, mallets, and other found objects to piano string beds. In this way they were able to produce a variety of bizarre sounds that sometimes resembled percussion instruments, and at other times resulted in special effects that sounded as if they were electronically synthesized.

Both men were initiated as honorary members of Tau Kappa Epsilon at Central State University (now University of Central Oklahoma) while on tour.

Ferrante and Teicher ceased performing in 1989 and retired to Longboat Key and Siesta Key, respectively, close to each other on the west coast of Florida. They continued to play together occasionally at a local piano store.

CDs of their music, some of it not previously released, have continued to appear.

Louis Teicher died of a heart attack in August 2008, three weeks before his 84th birthday. Arthur Ferrante died of natural causes on September 19, 2009, twelve days after his 88th birthday (he had once said he wanted to live one year for each piano key). Arthur is survived by his wife, Jena; his daughter, Brenda Eberhardt; and two granddaughters. (by wikipedia)

There is little doubt that high fidelity addicts, especially, will relish this newest offering of Arthur Ferrante and Louis Teicher, as they have all the duo’s previous albums. With their explorations into new vistas of sound and new stereophonic theories, the result is an altogether unique application of typical F. & T. experimentations, brought to the fullest measure of appreciation for you. For instance, have you ever wondered about the limitations of the eighty-eight assigned tones of the piano keyboard, and contemplated on the possibility of expanding the range an octave or so? Or two octaves—one to stretch an octave higher than the present top, and another eight sonic tones to range an octave lower than the present low? Cease your wondering, gentle music-lover… for Ferrante and Teicher have gone far beyond this aural panorama, extending (by means of their engineering ingenuity) the range of the keyboard by another four octaves—two octaves above and two octaves below the present range. 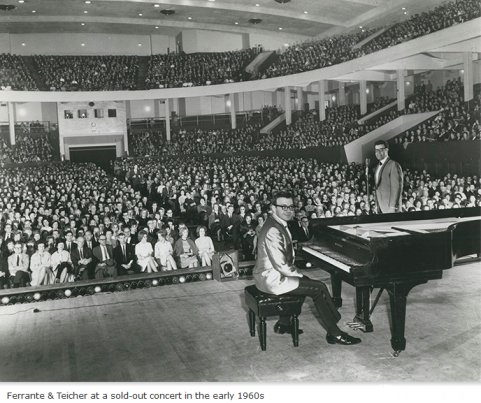 With your musical appetite thus awakened, we should take note of those who may be brand-new Ferrante and Teicher initiates and advise them that every sound heard in any F. & T. collection is made with naught save the piano—with but a few assists from the celeste in this set. No special piano, either, but (two) standard Concert D Steinways. To be quote factual about it, however, the assorted pianistics of these two pioneers of sound are the results of years of painstaking research and a consuming curiosity to explore the hidden realms of the pianoforte.

Having met at the famed Juilliard School of Music when each was but six years of age (!), Arthur Ferrante and Louis Teicher have long been in the vanguard of stalwart classical artisans who have bridged the not-so-wide gap to what is loosely termed “popular”

music. According to them, the line of demarcation is so slight as to be almost indiscernible, since “pop” music is representative of the great American contribution to the art. No theoretical “longhair” snobs, these two!

Ferrante, a native of New York City, and Teicher, hailing from Wilkes-Barre, Pennsylvania, studied under the noted pedagogue, Carl Friedberg, and pursued a well-rounded course in the affiliated subjects of composition, orchestration, conducting, etc. Upon graduation, both gentlemen were immediately appointed to the Juilliard faculty to foist their knowledge upon other gifted progenies. At this point, they discovered a new delight by playing with dance bands on weekends, supplementing their incomes and—more important—gleaning a thorough understanding and appreciation of what they consider to be a “distinct part of the American way of life.” It is their mutual contention, supported by many other classicists, that the works of such as Gershwin, Kern, Rodgers, Porter, Berlin, etc., have contributed as much to the lore of great musical repertoire as the compositions of the standard “greats.”

Their teaching duties at Juilliard also offered the team the opportunity to begin enlarging their already-extensive two-piano repertoire. They had done much in the matter of studying just about everything that had been written for duo-piano work, and had also experimented in the arrangements for the unusual styling which their subsequent teamwork has since developed so markedly well. It wasn’t until they had begun working on Ravel’s Bolero, however, that they suddenly devised their first new sound. Seeking a surcease from the repeated G on the piano, the team hunted desperately for a sound which would closely resemble the unsnared drum sound as employed in the orchestral version. The result was their answer to the violin mute, a rubber wedge, which fit their

purpose perfectly. From that first devisation, Ferrante and Teicher went on to greater experimentation, research and invention, until their startling innovations have become wholly identifiable as The Ferrante and Teicher Sound. They still continue their experiments, of course, and the team finds itself constantly bemused and amazed by the multitude of new sounds which they have coaxed from the piano—all parts of it—and have succeeded in passing far beyond the sound barriers which the instrument offered heretofore.

With this newest batch of sonic skill and perfection of performance, you are certain to gain a new insight and novel appreciation of the piano. Aside from the vivid Ferrante and Teicher interpretations, you will experience moments of sheer, unbounded delight at one time, then gasp in awe in the next moment to realize that the sounds you do emanate from a piano—or, specifically, two pianos (and that smattering of a celeste).

Here, then, are FERRANTE and TEICHER, musicians to the nth degree, scientists of a sort, virtuosi without peers. In this rocket age, the missile era, the atomic period, it seems only fitting that music should be represented by an epochal compilation of its own. To that end, we humbly present this group by Ferrante and Teicher—their HEAVENLY SOUNDS IN HI-FI. (Natt Hale) (taken from the original liner-notes) 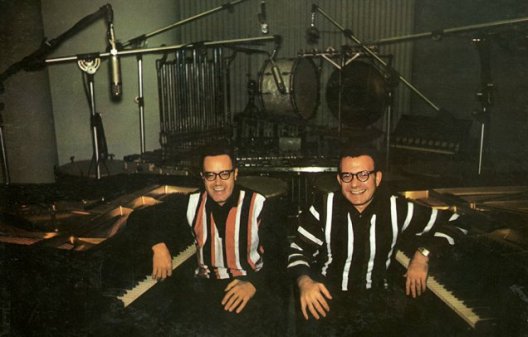 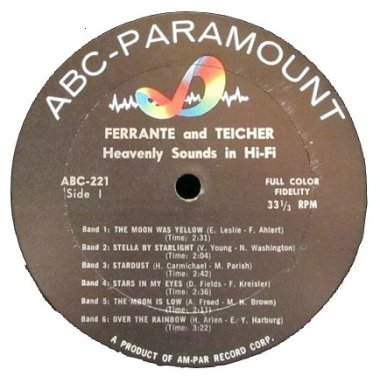