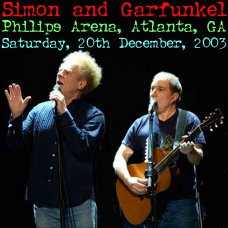 In 1968, Paul Simon and Art Garfunkel sang about two old friends at 70 ”sharing a park bench silently.” Simon and Garfunkel, now both 62, opened a sold-out three-night stand at Madison Square Garden last night, singing ”Old Friends.” They are on a reunion tour — doing their first shows together since 1993 — that’s likely to sell more than $50 million worth of tickets.

That’s not bad for an act that hasn’t bothered with new material in a generation. The best they could do was have Mr. Garfunkel join in on songs from Mr. Simon’s solo career since they broke up in in the mid-1970’s.

The songs Mr. Simon wrote for Simon and Garfunkel in his 20’s were acutely conscious of time passing. Songs like ”Hazy Shade of Winter,” ”Leaves That Are Green” and ”Old Friends,” and one the duo performed from Mr. Simon’s solo career, ”Slip Slidin’ Away,” see the present disappearing into a past that can never be recaptured. ”Preserve your memories,” the duo sang, ”they’re all that’s left you.” It was a theme the concert embodied far too well. 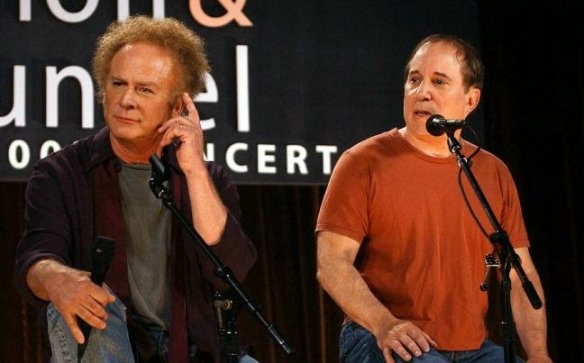 In the 1960’s, Simon and Garfunkel offered thoughtful, lapidary music that recognized turbulent times in songs like ”The Sound of Silence.” But Simon and Garfunkel were at their least graceful making grand statements, and they increasingly turned inward, following Mr. Simon’s more whimsical lyrics and expanding musical vocabulary.
Sign up for the New York Today Newsletter

Each morning, get the latest on New York businesses, arts, sports, dining, style and more.

They were comforting without seeming escapist; Mr. Simon’s lyrics were too smart, his music too intricate. 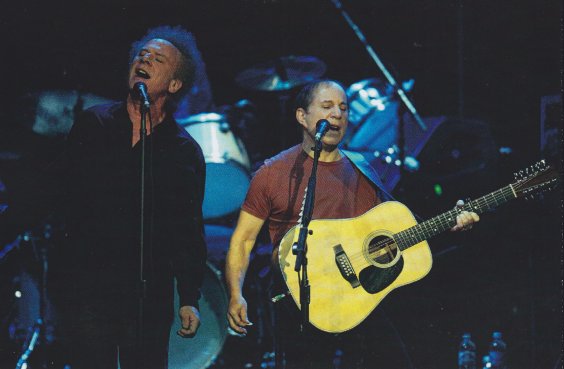 What Simon and Garfunkel are selling now, at up to $250 a ticket, isn’t harmony. Mr. Simon, both songwriter and guitarist, and Mr. Garfunkel, whose job was to add airy upper harmonies and sing an occasional Simon song by himself, have been famously estranged through the years.

On stage, Mr. Simon said they started singing together at 13 and started arguing at 14. And since they first broke up in the 1970’s, they have found it increasingly difficult to recreate the precise vocal blend preserved on Simon and Garfunkel albums. A live album, like the one they made from a 1981 reunion, would need a lot of doctoring.

Mr. Garfunkel briefly put an arm around Mr. Simon as they began ”Old Friends,” and 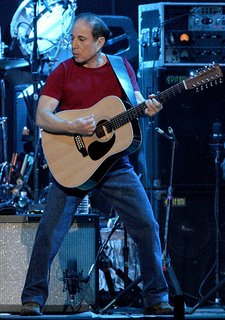 while he made a point of calling Mr. Simon’s songwriting a gift, he still seems to have trouble believing he’s the second banana. When he had a foreground part in a song, he sustained it to the point of dragging the tempo; ”I Am a Rock” and ”The Boxer” were nearly transformed from folk-rockers to dirges. When Mr. Garfunkel had a high note in the background, he often pushed it, perhaps because he now has to strain to reach it.

Mr. Simon’s voice has, like his songwriting, grown more supple and conversational through the years. But Mr. Garfunkel’s voice has frayed; it buzzes like a drafty old house. When the duo traded verses on formerly solo Simon songs like ”El Condor Pasa,” ”American Tune,” and on Mr. Garfunkel’s old showpiece, ”Bridge Over Troubled Water,” the contrasts were glaring.

Although nostalgia was thick in the arena from an audience filled with baby boomers, Simon and Garfunkel didn’t try to replicate their younger selves. Sometimes, as in ”Scarborough Fair,” they simplified the music, using a cello to replace what had been vocal counterpoint; sometimes Mr. Simon sang improvisational variants of his old melodies. 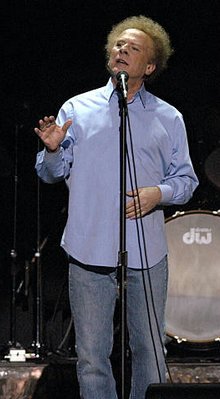 ‘The Sound of Silence,” which was released during the 1960’s in an acoustic guitar version but became a hit after as a folk-rock remake, segued between both versions. The band also added touches of Mr. Simon’s more recent delvings into world music. ”The 59th Street Bridge Song” included a slide version of a didgeridoo, an Australian wooden trumpet.

Singing the old songs together, Simon and Garfunkel don’t follow some of the rudiments of vocal harmony groups, like breathing in the same place or watching each others’ faces.

It’s something that might not have occurred to a spectator if Simon and Garfunkel weren’t touring with the duo they learned their harmonies from, the Everly Brothers.

Don Everly, 66, and Phil Everly, 64, haven’t always gotten along, either. But when, in mid-concert, they sang their hits like ”Wake Up Little Susie” and ”All I Have to Do Is Dream,” their brotherly unanimity was virtually untouched by time. (by Jon Pareles) 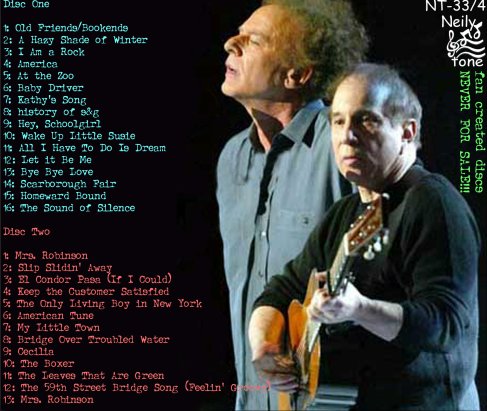 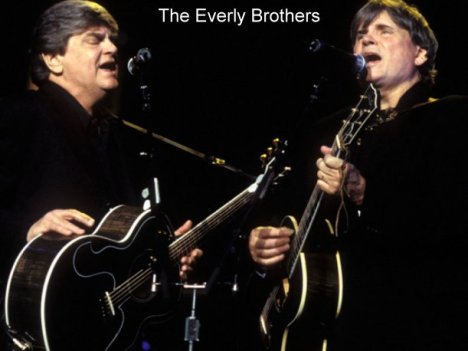 All songs written by Paul Simon except as indicated 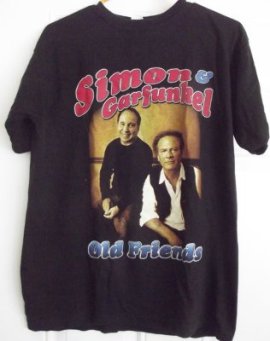 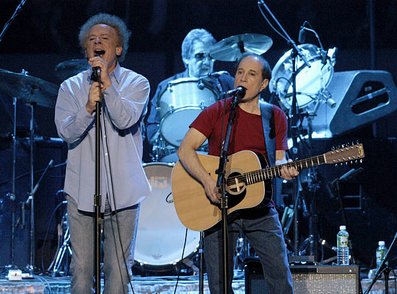 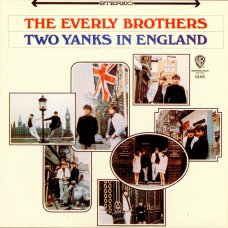 Two Yanks in England is an album by The Everly Brothers, released in 1966.

The backing band on most of the recordings is actually The Hollies and eight of the twelve songs featured are credited to L. Ransford, The Hollies’ Allan Clarke, Tony Hicks, and Graham Nash songwriting pseudonym. Jimmy Page and John Paul Jones are also purported to play on the record as session musicians. Also, in a recent interview with Nash on David Dye’s World Cafe, it is claimed Reggie Dwight (aka Elton John) played on the album.

Two singles were released from the album in the U.S.; “Somebody Help Me” b/w “Hard Hard Year” in late 1966 and “Fifi the Flea” b/w “Like Every Time Before” in early 1967. Both singles failed to chart. In the U.K., where “Somebody Help Me” had already been a No.1 hit for The Spencer Davis Group shortly before The Everly Brothers recorded it, just one single was released from the album: “I’ve Been Wrong Before” b/w “Hard Hard Year” (August 1966). This also failed to chart. “I’ve Been Wrong Before” should not be confused with the Randy Newman song of the same title recorded by both Dusty Springfield and Cilla Black the previous year, which Black had a modest hit with in the U.K. (No.17, May 1965). The last track on Side One of Two Yanks in England, “Pretty Flamingo”, was a U.K. No.1 hit single for Manfred Mann at the time the recording of the album began (May 1966). (by wikipedia) 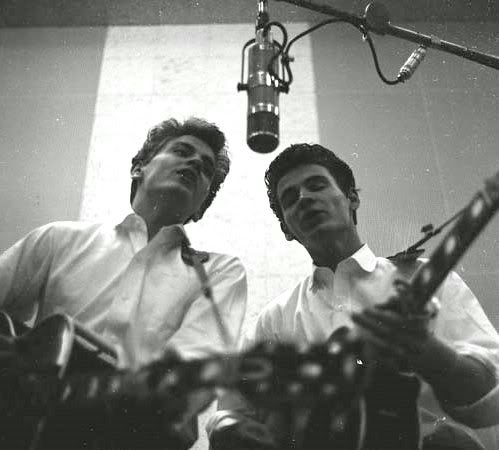 At first glance, this seems like a cash-in on the British Invasion. Recorded in London in 1966, no less than eight of the 12 songs were written by the Hollies (who released their own versions of many of the tunes). There are also covers of hits by the Spencer Davis Group and Manfred Mann. With a harder rock guitar sound (though not overdone or inappropriate) than previous Everlys discs, the duo’s interpretations are actually worth hearing in their own right. The harmonies are fabulous, and indeed, the Everlys improve a few of the Hollies’ songs substantially. “So Lonely” and “Hard Hard Year,” in particular, have a lot more force, transforming the tunes from decent Hollies album tracks to excellence. Because so much of the material is non-original, this couldn’t be placed in the top rank of Everly Brothers recordings. But it is a good effort that shows them, almost ten years after “Bye Bye Love,” still at the top of their game and still heavily committed to a rock & roll sound. This was a bold contrast to other ’50s white rock & rollers with roots in country, most of who had retreated to tamer country-oriented sounds by the mid-’60s. (by Richie Unterberger) 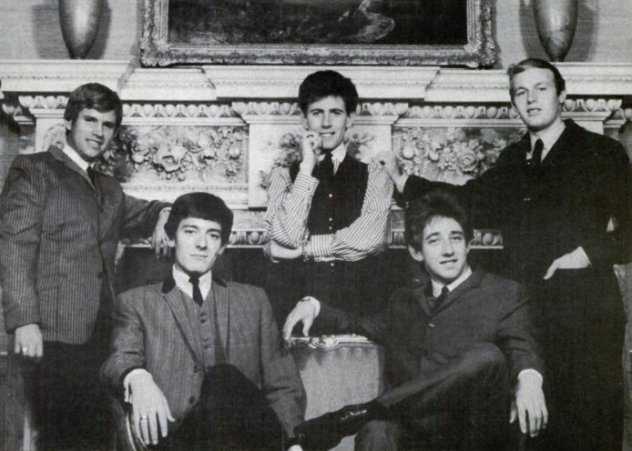 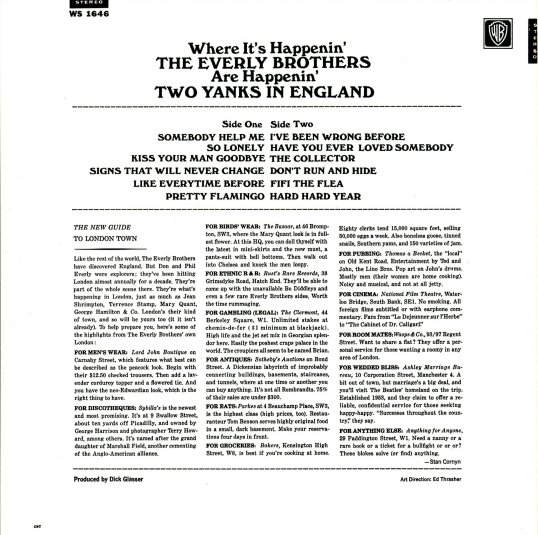 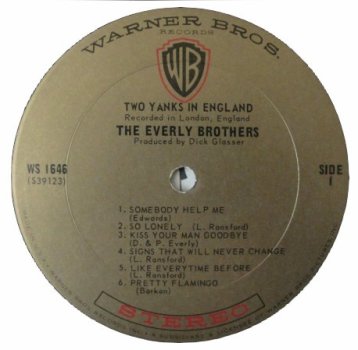 The Hollies have also released own versions of their songs: 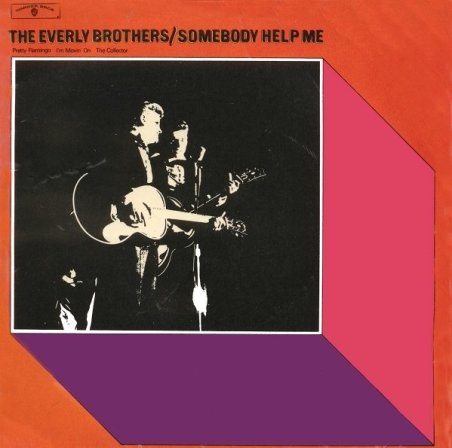 The EP from this sessions