Fredianelli was born on June 12, 1930, in Detroit, Michigan. They formed the Gaylords (originally The Gay Lords) in Detroit in 1949.

The group’s name was decided upon after a chance encounter with Marcus Wren.

In the 1950s the group had a number of Italian-flavored hits on the charts, often consisting of a song partly sung in Italian and partly in English. Their most successful release was “Tell Me You’re Mine”, which had sold over one million copies by 1958. “Tell Me You’re Mine” reached #3 on the US chart.

As Gaylord and Holiday, the two remaining members of the group continued to perform until 2003.

Fredianelli died on January 25, 2004 in Reno, Nevada. Bonaldi still performed with Ron Gaylord, Jr., Ronnie Gaylord’s oldest son (the other son being rock guitarist Tony Fredianelli) until his death on May 10, 2017 in Carson City, NV.

Donald “Don” Rea, keyboardist for The Gaylords, born in Detroit, Michigan, on 9 December 1928, died in Reno, Nevada, on 30 June 2017 after a short battle with cancer. (by wikipedia)

A pre-rock white vocal trio, the Gaylords had a series of hits from 1952 to 1954 with novelty flavored material and Italian-derived love songs. It’s difficult for the latter-day listener not to associate the records with the kind of background music you might hear at the average pizza parlor. In its day, however, it was not background fodder, but highly commercial fare that was cleanly executed and unreservedly sentimental, wearing its heart on its sleeve as surely as excess tomato sauce on a napkin.

Formed in Detroit, the group, featuring Ronnie Fredianelli, Burt Bonaldi and Don Rea, made number two in 1952 with their debut outing, “Tell Me You’re Mine.” Derived from an Italian ballad, the song was originally recorded as a disc to be sold at Bonaldi’s father’s store. The engineer on that session was impressed enough to help pitch the act to established labels, and the trio ended up with Mercury. After a couple more hits, Fredianelli was drafted into the Army, changed his name to Ronnie Gaylord, and began recorded for Mercury as a solo vocalist. The Gaylords decided to keep going, recruiting Billy Christ as Ronnie’s replacement. 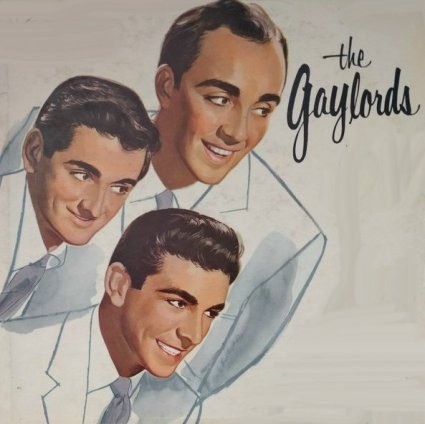 “From the Wine Came the Grape,” “Isle of Capri,” and “The Little Shoemaker” were all big hits for the Gaylords over the next couple of years. Ronnie Gaylord had a big hit of his own with “Cuddle Me,” and got in on the rock & roll cover game with a version of Fats Domino’s “Ain’t That a Shame.” The rock & roll revolution, however, made groups such as the Gaylords passe, although they continued to record for Mercury into the ’60s. Burt Bonaldi, after changing his name to Burt Holiday, formed the Gaylord & Holiday duo with Ronnie Gaylord. The pair even had a tiny hit in 1976 with “Eh! Compuri,” recorded for, of all things, a subsidiary label of Motown. (by Richie Unterberger)

And here´s their third album … I gues, The Gaylord was a important of the Italian-American music history …

It´s a nice lbum and I include a very interesting interview about the history of The Gaylords. 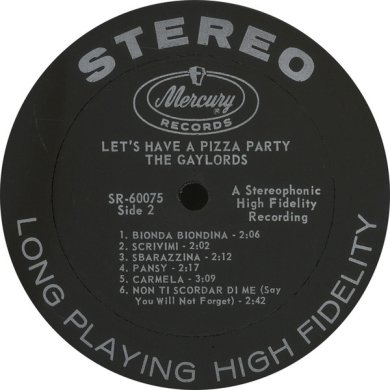