I was from thursday evening till today with my wife in Cracow/Poland to celebrate my 60th birthday and I have ot thank my wife for this real great idea !

And of course I found in a small record store some excellent recordings form the polish jazz-scene. Here´s the first one:

This album features the Polish Jazz trio called simply The Jazz Trio (probably the most unreasonable name one can adopt in such circumstances), which consisted of saxophonist Janusz Brych, pianist Marek Piatak and drummer Michal Zduniak. The pianist composed four of the five compositions present here and co-composed the fifth with the saxophonist. Although little know and mostly forgotten, this is, in retrospect, quite an excellent and unusual album, which Polish Jazz connoisseurs should definitely seek out.

The music is a very strange amalgam of melodic, pre-composed intriguing music, mixed with excellent saxophone improvisations, which are very Free Jazz oriented and superbly executed. Sometimes the saxophone parts are overdubbed, which creates an even stronger “wall of sound” effect, common in Free Jazz. Also the absence of bass, which dramatically influences the sound of the music, contributes to the “strangeness” and of course transfers the responsibility of keeping time towards the piano player and the drummer, who is quite unusual as well. The overall result is definitely fresh and surprising, quite different from what was happening on the local scene at the time. Perhaps it was an early precursor of the Yass scene, which was about to explode in Poland shortly after this album was recorded. 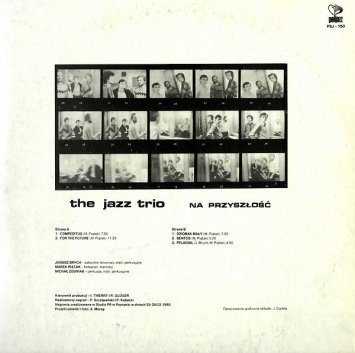 The overall level of individual virtuosity as well as the interplay between the three musicians makes this album a hidden gem, which simply begs to be discovered. It is a pity they never recorded together again (as far as I know) as the trio certainly had the potential of becoming one of the hottest groups on the Polish Jazz scene. But, alas, we´ll never know what might have happened. In the meantime let´s enjoy what we can hear!

The Poljazz label, which originally released this album, was active for 20 years (between 1972 and 1991) and was owned by the Polish Jazz Society. Considering the fact that the music industry in the Socialist State was centralized and totally controlled, with just one State owned music company producing all the albums, the possibilities to record and release Jazz albums were extremely limited. Poljazz was conceived and founded in order to allow for many more Jazz (and other) albums to be released independently from the State owned Polskie Nagrania / Muza and as such revolutionized the music industry at the time, being the only such enterprise in Eastern Europe.