In June 1954, the Ray Charles Singers, a name bestowed on them by Perry Como, began recording a series of albums. Due to advances in recording technology, they were able to create a softer sound than had been heard before and this was the birth of what has been called “easy listening”. Record producer Jack Hansen used some of the singers to provide backing vocals for Buddy Holly’s last songs, which Holly had composed and recorded shortly before his death in February 1959. The singers’ close harmonies behind Holly’s lead vocals simulated the sound of Holly’s hit records with the Crickets. Six songs resulted from the Hansen sessions, led by the 45-rpm single “Peggy Sue Got Married”/”Crying, Waiting, Hoping”.

On a cruise in 1964, Charles heard a Mexican song called “Cuando Calienta el Sol”. He liked it, recorded it, under the English title “Love Me with All Your Heart”, and his recording became a hit, riding to #3 on Billboard Magazine, #2 on Cashbox Magazine. This was followed by “Al Di La”, also a very popular recording. The Ray Charles Singers were not one group of vocalists. They were different combinations of singers on records, tours and TV shows. What made them the Ray Charles Singers was the conducting and arranging of Ray Charles. He generally recorded with 20 singers (12 men and 8 women) and these vocalists appeared on Perry Como’s television show. The Ray Charles Singers also were the voices behind many commercial jingles.

Charles decided to produce a “live” performing group to send on the road with Perry Como. The group of 12 singers opened in Las Vegas at the International Hotel and also opened the show for Como at Harrah’s in South Lake Tahoe.

Charles wrote the music and lyrics for an album produced by the Continental Insurance Company for the New York World’s Fair in 1964, titled Cinema ’76. It was a companion piece to a 30-minute show about unsung heroes of the American Revolution.

On June 25, 2019, The New York Times Magazine listed the Ray Charles singers among hundreds of artists whose material was reportedly destroyed in the 2008 Universal fire. (by wikipedia)

And here is one of their nice Easy Listening album, it was their 7th album by The Ray Charles Singers and it´s of course a “summer” album … Ih weish all readers of this blog a very good summertime ! 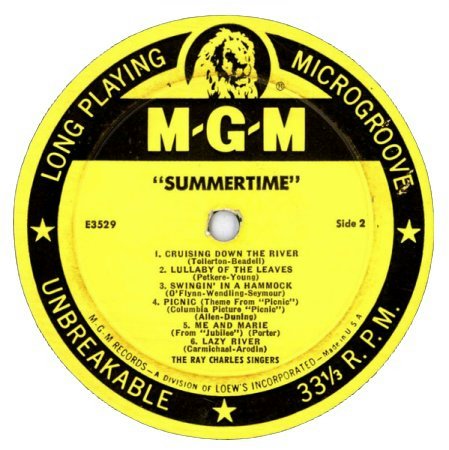