Inspector Clouseau is a 1968 United Artists feature film, the third in the The Pink Panther film series. It was directed by Bud Yorkin, written by Frank Waldman and Tom Waldman and stars Alan Arkin as Inspector Clouseau. It was filmed by Mirisch Films at MGM-British Studios Borehamwood and Europe.

When the series resumed with The Return of the Pink Panther (1975), costume design and elements of Arkin’s performance were retained when Peter Sellers took back the role. Frank Waldman and Tom Waldman also make their debut writing the series. Frank Waldman

Inspector Clouseau does not feature Sellers, was not directed by Blake Edwards, and did not have a score by Henry Mancini. All three were involved at that time with the film The Party. The Mirisch Company wanted to proceed with this film, so when Sellers and Edwards declined to participate, Mirisch decided to proceed without them. The film languished in obscurity and although it has been released to home video on VHS and DVD, was not included in 2004’s Pink Panther Collection but was later added to the Ultimate collection released in 2008.

An organized crime wave strikes across Europe. Suspecting a mole within Scotland Yard, the Prime Minister brings Clouseau in to solve the case. Clouseau foils two assassination attempts but is subsequently kidnapped. The gang uses him to make masks of his face which they later use to commit a series of daring bank robberies across Switzerland. Eventually, Clouseau foils the plot and unmasks the traitor within the Yard. (by wikipedia)

This is a great soundtrack form Ken Thorne who unfortunately always seems to get overlooked. 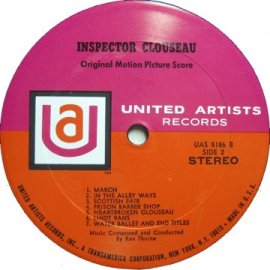