Toe Fat was an English rock music band, active from June 1969 to 1971, notable for including two future members of Uriah Heep.

The band was founded by Bennett, a former pop star, after the dissolution of the Cliff Bennett Band. He teamed with the former Gods keyboard player Hensley, who drafted in fellow ex-Gods members Kerslake and Glascock. The name was decided over dinner when Bennett and his manager attempted to create the most disgusting band name possible.

Toe Fat was signed to the record label, Rare Earth, in the US. In the UK, the band signed with EMI, who released their first album on the Parlophone label, and the second on Regal Zonophone. 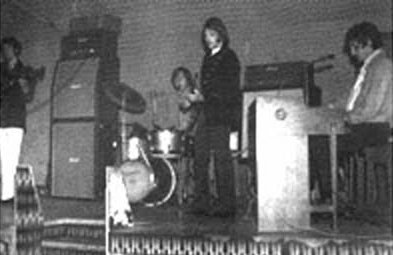 The eponymously titled first album flopped commercially, but gained considerable critical praise.[citation needed] Such was their stir that after their first single, “Workin’ Nights”, (the B-side was an early Elton John composition “Bad Side of the Moon”) they were booked for a tour supporting Derek and the Dominos in the US. The album was also notable for its cover designed by the recently formed graphic art company Hipgnosis. The cover showed a beach scene with four people who have large toes superimposed over their heads. For the US release, a man and a topless woman in the background were replaced by the image of a sheep. The photo of the band on the back of the US album shows Cliff Bennett, Alan Kendall, John Glascock, and Lee Kerslake even though Alan

Kendall did not play on the first album. This was an interim line-up, Lee Kerslake would soon depart also before second album was recorded.

Hensley quit the band to form Uriah Heep. Alan Kendall replaced Hensley, before their second album, Toe Fat Two. Bennett admitted in the sleeve notes of his Rebellion album that when asked he “probably should have joined them”. Kerslake left to join the National Head Band, before also joining Uriah Heep in 1971. Glascock later joined Jethro Tull. Another ex-Gods man, Brian Glascock, became the new drummer.

Jonathan Peel (not the DJ) produced Toe Fat 2, after hearing them on several BBC radio sessions, including one for Terry Wogan. However, this LP also flopped, despite more radio airplay, and a reasonably successful US tour promoting it. Following these successive failures, their management and labels informed the group that they could no longer fund them.

Bennett recorded Rebellion, before quitting the music industry to become a shipping magnate. He used to occasionally tour with the Rebel Rousers. Wh

Alan Kendall and Brian Glascock went on to play with, and write for, the Bee Gees. (by wikipedia)

The late-’60s success of heavy-handed acts like Cream, the Jimi Hendrix Experience, and Led Zeppelin instigated many British musicians — young and old — to grow their hair and start hard rock bands, and London’s oddly named Toe Fat were no exception. Formed in June 1969 by veteran singer Cliff Bennett (ex-Rebel Rousers) with multi-talented guitarist and keyboard player Ken Hensley, bassist John Glascock, and drummer Lee Kerslake (all of them ex-Gods), Toe Fat quickly parlayed their respectable résumés into a deal with 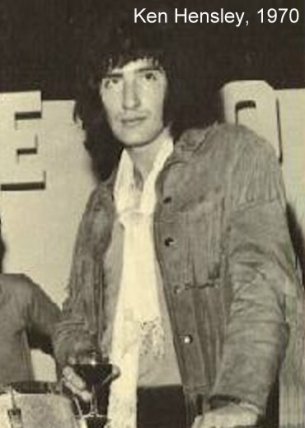 Parlophone in the U.K. and Rare Earth in the U.S. But their eponymous first album didn’t pack nearly as much bombast as the musical titans named above, sounding more like contemporaries Savoy Brown, Status Quo, or Humble Pie (at about 75 percent of Steve Marriott’s intensity). If anything, the group’s typically midpaced, R&B-steeped fare owed as much to the on-the-wane British blues boom as anything hot and heavy; although at their best, memorable cuts like “That’s My Love for You,” “But I’m Wrong,” “Working Nights,” and the driving “You Tried to Take It All” cast out great hooks to match the band’s top-notch musicianship and Bennett’s emotionally soulful voice. Some controversy remains as to who really played on the record, but if Hensley was truly the man, as credited, he really takes over on “Nobody” (boasting wildly distorted fuzz guitars and extended soloing) and “I Can’t Believe” (featuring more forceful guitar work and just as many keyboards), then strums along in suitably controlled fashion on the acoustic-laced “The Wherefors and the Whys.” Speaking of dubious performances, largely forgotten Ian Anderson doppelgänger Mox was brought in to add flute to “Just Like All the Rest,” which only serves to bring about inevitable Jethro Tull comparisons.

But the album’s two covers fare quite well, with “Just Like Me” delivering a punchy update on the standard popularized by the Coasters and Hollies, while the album’s tough-rocking first single, “Bad Side of the Moon,” was actually written by none other than the emerging Elton John/Bernie Taupin team (and would also be covered by Canadians April Wine a short time later). Unfortunately, although it met with widespread critical kudos, Toe Fat’s debut was a resounding commercial flop, and may now be best remembered because of its curious, Hipgnosis-designed cover art, featuring toe-headed people lounging on a beach. The group would persist through one more album, but with Hensley and Kerslake already gone to form Uriah Heep (they had left even before Toe Fat’s first American tour in support of Derek & the Dominos), that album’s greater stylistic inconsistency did the band no favors. (by Eduardo Rivadavia) 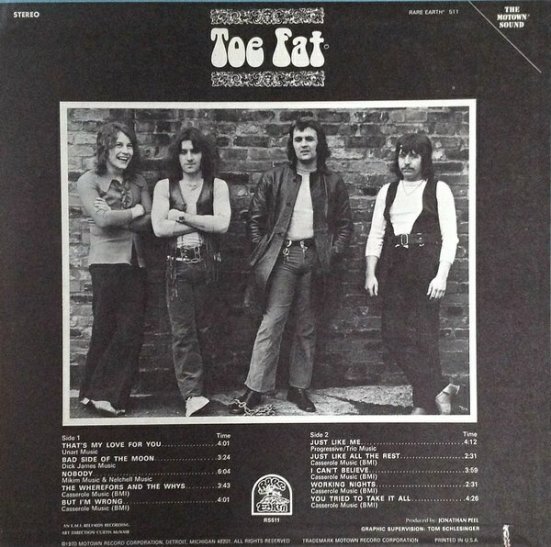 Alternate backcover from the US edition