The duo made two joint recordings in the early 1980’s, and teamed up again for this record, this time with British drummer Gary Husband (Level 42). What makes Seven Moons such a success is that Bruce and Trower each play to their strengths, Bruce brings his distinctive croon/moan to bluesy, riff-oriented tunes dominated by Trower’s playing. They conjure a power trio sound which touches on Cream and Hendrix yet draws from their own deep, dark wells of experience.

Jack Bruce must have enjoyed his 2005 get-together with Cream so much that, when Clapton and Baker were unwilling to continue the collaboration, he rang up Robin Trower to renew the brief power trio fling they had in the mid-’80s. The Trower-Bruce pairing had released only two albums, B.L.T. and Truce, and was dormant since 1982, so this 2007 reunion was somewhat of a continuation of the project, albeit one separated by a quarter century. The results impressively continue where Truce left off, as Bruce brings his distinctive croon/moan to bluesy, riff-oriented tunes dominated by Trower’s silvery guitar runs. Gary Husband fills the drum slot adequately if inconspicuously, but his contributions are mixed so far under Bruce’s vocals and Trower’s guitar that they are secondary. The previous two releases called in Trower’s old Procol Harum lyricist Keith Reid and Bruce collaborator Peter Brown to write the words, but Bruce and Trower pen these 11 songs without outside assistance. Most tunes such as “Lives of Clay,” a barely concealed rewrite of Cream’s “Politician” lick, revisit familiar territory, and clearly these guys are not out to expand any boundaries.

Bruce, who has had serious medical problems since they last recorded, sounds terrific — strong and vibrant, even if a few tunes such as the minor-key ballad “I’m Home” seem somewhat clunky. This disc’s “So Far to Yesterday” recalls Trower’s “Twice Removed from Yesterday” both in its title and general mood. The yin/yang pairing keeps Bruce’s more oblique jazz influences in check and does the same for Trower’s space rock instincts, yielding a throwback that fans of both artists’ previous work should enjoy. Trower’s patented Hendrix-styled guitar adds a psychedelic edge to songs that generally stick to a midtempo lope and never blast out with Cream’s insistent power, which can be somewhat frustrating to anyone who would like to hear these guys let loose. Still, there are enough strong moments on Seven Moons to recommend it, especially to those who enjoyed the duo’s previous work 25 years ago. (by Hal Horowitz)

Put Simply: Seven Moons demonstrates a blazing performance by two masters of Rock & Blues, who’ve once again hit their strides and maintain their creative force and drive…in their 60s!!

As echoed by many, I’m a huge Jack Bruce/Robin Trower fan. And though I appreciated ‘some’ of the duo’s former efforts (Truce/BLT/No Stopping) those records never garnered repeated listening. Perhaps it was the thinned-out 80s sound; perhaps it was because Jack’s voice and style was definitely ‘different’ during that period (see: I’ve Always Wanted To Do This)…whatever the case, I never loved those albums.

Cut to 2007/2008. Jack (as evidenced by the Cream reunion, but also on his recent solo efforts) has re-captured the power in his voice, and his playing remains as powerful and driving as ever. Trower, whose playing has always entranced me, adds drive, punch, and creativity to every note, every solo. Put that together with Gary Husband (who’s drummed on several of Jack’s older releases) and you’ve got yourself a power-trio in the best sense of the word.

The fact that this album was mostly cut live is evident throughout. You really ‘feel’ like you’re in the room with them; you ‘feel’ their enjoyment, and this is simply something that you just don’t hear everyday.

On a recording note, this album is brilliantly done. Again, just listen to the title track to hear what I mean. It’s clean, loud, up-front, and mastered to perfection. If the songs weren’t so darned catchy, I’d love this album *simply* for the recording.

So, if you want to hear what these legends are doing now, pick up this release. It may be classic old-school to some, but it’s inherently new, absolutely bluesy, and downright hot. Follow that path, to the Land of the Seven Moons. (Jason A. Levine)

Bridge of Sighs is the second solo album by the English guitarist and songwriter Robin Trower. Released in 1974, it was his second album after leaving Procol Harum, and was a commercial breakthrough for Trower. Songs such as “Bridge of Sighs”, “Too Rolling Stoned”, “Day of the Eagle” and “Little Bit of Sympathy” became live concert staples.

In an interview with Guitar World, Trower explained how the album got its title. Robin said that he had had the first line of the song for years and one day saw some sport pages which listed a racehorse called Bridge of Sighs, which he thought would be a great title.

Bridge of Sighs (Chrysalis 1057) reached #7 in the United States during a chart stay of 31 weeks. It was certified Gold on 10 September 1974. Early printings of the original album cover had the front image upside-down and were more greenish in colour.

The title track was covered by Opeth for the special edition of their 2008 album Watershed.

“Day of the Eagle” was covered by Billy Idol guitarist Steve Stevens on his third solo album Memory Crash. Tesla also covered the song on their 2007 Real to Reel album as did Armored Saint on their Nod to the Old School record. (by wikipedia)

Guitarist Robin Trower’s watershed sophomore solo disc remains his most stunning, representative, and consistent collection of tunes. Mixing obvious Hendrix influences with blues and psychedelia, then adding the immensely soulful vocals of James Dewar, Trower pushed the often limited boundaries of the power trio concept into refreshing new waters. The concept gels best in the first track, “Day of the Eagle,” where the opening riff rockingly morphs into the dreamy washes of gooey guitar chords that characterize the album’s distinctive title track that follows. At his best, Trower’s gauzy sheets of oozing, wistful sound and subtle use of wah-wah combine with Dewar’s whisky-soaked soul-drenched vocals to take a song like the wistful ballad “In This Place” into orbit. “Too Rolling Stoned,” another highlight and one of the most covered tracks from this album, adds throbbing, subtle funk to the mix, changing tempos midway to a slow, forceful amble on top of which Trower lays his quicksilver guitar. One of the few Robin Trower albums without a weak cut, Bridge of Sighs holds up to repeated listenings as a timeless work, as well as the crown jewel in Trower’s extensive yet inconsistent catalog. (by Hal Horowitz ) 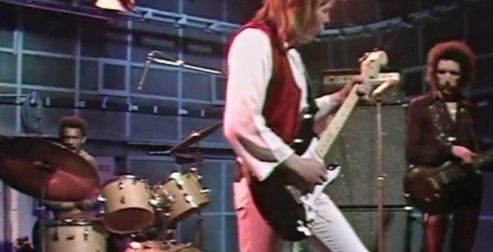 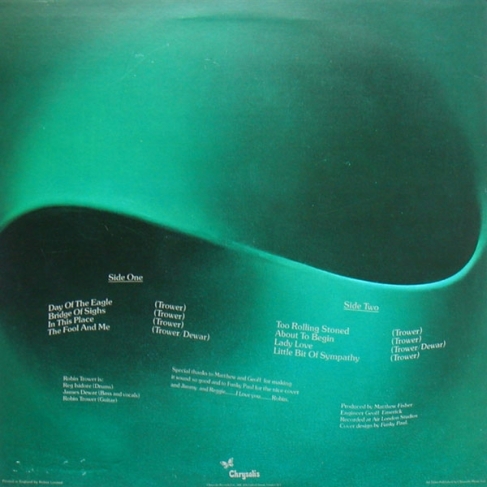