African-American pianist Fats Waller wrote such jazz standards as “Ain’t Misbehavin'” and earned fame for his comedic radio performances in the 1930s.
Synopsis

Born on May 21, 1904, in New York City, Fats Waller was influenced as a teenager by jazz great James P. Johnson. He proved a gifted piano player and songwriter, delivering such jazz standards as “Ain’t Misbehavin’.” In the 1930s, Waller’s fame reached new heights following his performances on radio and in film. He died from bronchial pneumonia on December 15, 1943, in Kansas City, Missouri.

Thomas Wright “Fats” Waller was born on May 21, 1904, in New York City. He learned to play piano at the age of 6, and within a few years was also learning the reed organ, string bass and violin. After dropping out of school at around age 15, he became an organist at the Lincoln Theatre in Harlem.

Waller’s father, Edward, a baptist minister, was hopeful that his son would follow a religious calling instead of a career in jazz. However, the path to music became

inevitable following the death of Waller’s mother, Adeline, in 1920. Waller moved in with the family of pianist Russell B.T. Brooks, who introduced the youngster to James P. Johnson, founder of the stride school of jazz piano.

Waller made his recording debut in 1922 for Okeh Records with the solo efforts “Muscle Shoals Blues” and “Binningham Blues.” Shortly afterward, he released “Squeeze Me,” an important early work that established his bona fides as a songwriter.

Waller continued to play organ at the Lincoln Theatre while also taking engagements at theaters in Philadelphia and Chicago. In addition, he often starred at Harlem’s famous “rent parties,” where he and his fellow musicians would essentially stage concerts in friends’ homes. Larger than life with his sheer size and magnetic personality, Waller was known to enjoy alcohol and female attention in abundance.

Waller became more involved with writing and performing for revues in the late 1920s, starting with Keep Shufflin’ in 1927. He forged a strong collaborative partnership with Andy Razaf, with whom he wrote two of his most famous stage songs, “Honeysuckle Rose” and “Ain’t Misbehavin’.” During this time, Waller also recorded such standards as “Handful of Keys” and “Valentine Stomp” as a soloist, and “The Minor Drag” and “Harlem Fuss” as leader of Fats Waller and His Buddies. 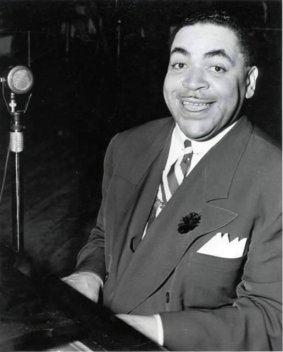 Waller branched out to radio with his New York-based shows “Paramount on Parade” and “Radio Roundup” from 1930-31, and the Cincinnati-based “Fats Waller’s Rhythm Club” from 1932-34. After returning to New York in 1934, he began a new regular radio program, “Rhythm Club,” and formed the Fats Waller and His Rhythm sextet.

Waller appeared in two Hollywood films in 1935, Hooray for Love! and King of Burlesque. However, while his fame was spreading, he reportedly had become disenchanted with the comedic, irrevererent persona that fans had come to expect from his broadcasts, instead seeking more respect as a serious artist. He appeared to be making strong strides in that direction after a trip to England in 1938, recording the ambitious composition “London Suite.”
Late Career and Death

Waller returned to Hollywood early in 1943 to film Stormy Weather with Lena Horne and Bill Robinson. After returning to New York, he began writing songs for another revue, Early to Bed.

Fats Waller had maintained a heavy travel schedule into the 1940s, despite declining health, but the wear and tear eventually caught up with him. While returning home from another West Coast trip in late 1943, he contracted bronchial pneumonia, an illness that silenced the beloved and influential jazz great for good during a stop in Kansas City, Missouri, on December 15, 1943. (biography.com) 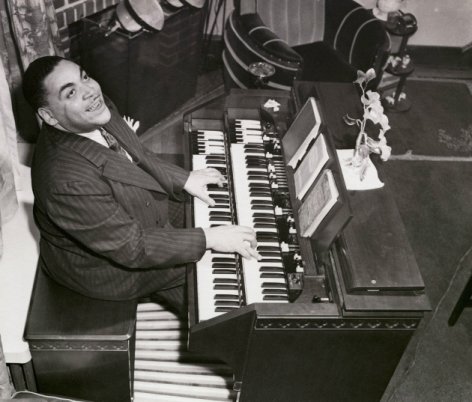 And here´s a nice little compilation with many hits of his career. At least every serious record collector shul have one album Fats Waller … here´s your chance ! 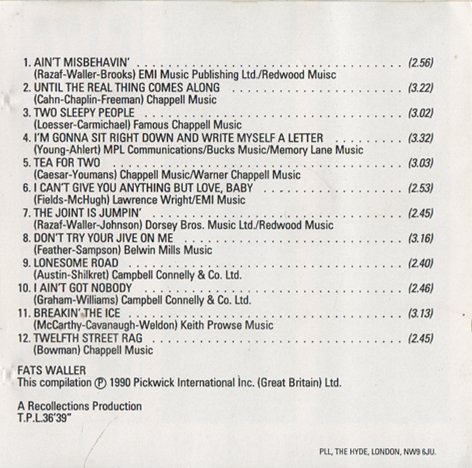