Musician, artist, director, actor, writer, linguist, activist – the extraordinary versatility of Dr Richard Walley OAM has seen him wear many hats over his long and illustrious career.  Born in Meekatharra (about 750km north of Perth) in 1953, as a child Richard moved with his family to Pinjarra, 80 kms south of Perth and by 23 was chairing the Aboriginal Advisory Board. Since forming the Middar Aboriginal theatre in 1978 he has taken the Nyungar culture from the South West corner of Western Australia to every continent on the planet and to almost ten million people worldwide.

As a renowned and highly respected exponent of the didgeridoo, Richard Walley has produced a six-CD collection of didgeridoo music that is inspired by the six seasons of the Nyungar calendar. Richard’s latest musical project is ‘Two Tribes’, a collaboration with a group of artists which has resulted in an eclectic selection of songs combining traditional Indigenous music with contemporary styles including rap and hip hop.

His didgeridoo performances have been at the Albert Hall in London, in Greece, Slovenia, Japan, Mexico, the USA, and Canada, to name but a few. In 2001 he performed in Westminster Abbey for dignitaries, including the Queen of England, as part of the Centenary of Federation celebrations.

In 1993 Richard was awarded the ’Order of Australia’ Medal for his contribution to the Performing Arts and Nyungar culture.

In 2000, Richard accepted the position of Chairperson of the Aboriginal and Torres Strait Islander Arts Board of the Australia Council, a position he had held previously in 1992.

In 2001, Murdoch University in Western Australia recognised his contribution to Nyungar culture and the wider community with an honorary Doctorate of Letters.
A fluent speaker of Nyungar language, a role model for Aboriginals and non-Aboriginal people alike, Richard continues to push boundaries, continually developing personally whilst always focussed on the bigger ‘community’ picture of the Arts, Culture and Environment.

The Queen listens, along with Western Australia’s Premier Colin Barnett, to the sound of the didgeridoo played by Richard Walley in Perth on the last day of her trip (2011)
Richard Walley has played his unique style of didgeridoo with many famous musicians, such as Paul Simon and Stevie Wonder.

And this is one of his early recordings from 1994 … Discover and enjoy the magic of his instrument and his music ! 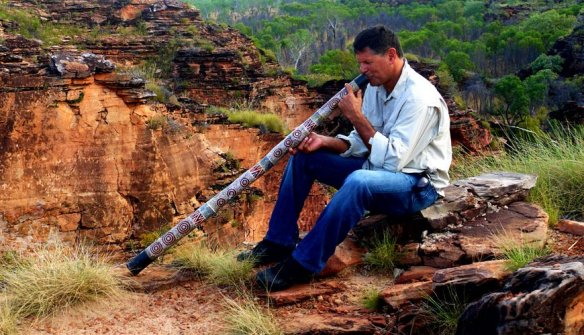