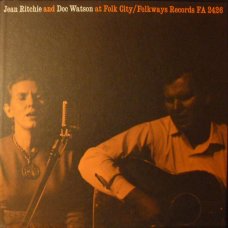 According to reissue annotator Joe Wilson, Doc Watson and Jean Ritchie had never heard of each other before they got together for a concert at Folk City in 1963, which says something about the 40-year-old Watson’s obscurity at the time and about his limited knowledge of other performers, since 39-year-old Ritchie had been recording for more than a decade. The two had a lot in common, however, the North Carolina-born guitarist and banjo player sharing a repertoire of traditional material with the Kentucky-born dulcimer player. During their set (actually featuring only six songs performed together, with seven solos by Watson and four by Ritchie), they mixed

murder ballads with spirituals and dance tunes. The titles included many songs that were familiar to country fans, and that would become familiar to folk fans as well: “Pretty Polly,” “Wabash Cannonball,” and “Amazing Grace.” Especially interesting were “Go Dig My Grave,” “Hiram Hubbard,” and “House Carpenter,” on which Watson played banjo and Ritchie sang. This was very much a joint appearance rather than a real duo outing, but the performers were sufficiently strong and complementary enough to make it work. (The 1990 Smithsonian/Folkways reissue added three tracks — “East Virginia,” “Blue Ridge Mountain Blues,” and “Pretty Saro” — to the original 1963 release.) (by William Ruhlmann)

Some informations about Gerdes Folk City:

Gerdes Folk City (sometimes spelled Gerde’s Folk City) was a music venue in the West Village in New York City. Initially opened as a restaurant called Gerdes, by owner Mike Porco, it eventually began to present occasional incidental music.
First located at 11 West 4th Street (in a building which no longer exists), it moved in 1970 to 130 West 3rd Street. It closed in 1987. 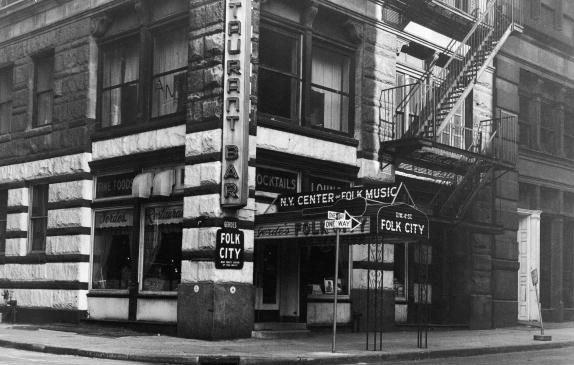 On January 26, 1960, Gerdes turned into a music venue called The Fifth Peg, in cooperation with Izzy Young, the director of the Folklore Center. The Fifth Peg’s debut bill was gospel folk singer Brother John Sellars and Ed McCurdy, writer of the anti-war classic “Last Night I Had the Strangest Dream”. Porco and Young had a falling-out, and on June 1, 1960, Gerdes Folk City was officially born with a bill featuring folksinger Carolyn Hester and Logan English. At this time Gerdes Folk City was booked by a folk enthusiast Charlie Rothschild (who later became Judy Collins’ longtime manager) and English. Gerdes Folk City was suddenly one of the central music venues of the era. It became one of the most influential American music clubs, before finally losing its lease in 1987.
“Rolling Stone Book of Lists” called Folk City one of the three top music venues in the world, along with The Cavern and CBGBs. Folk City helped to launch the careers of several world-renowned musical stars from Bob Dylan to Sonic Youth, and showcased numerous music styles from folk to alternative rock. 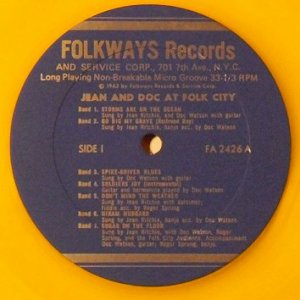