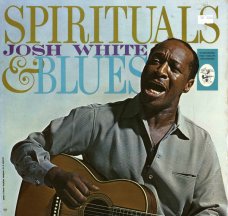 Joshua Daniel White (February 11, 1914 – September 5, 1969) was an American singer, guitarist, songwriter, actor and civil rights activist. He also recorded under the names Pinewood Tom and Tippy Barton in the 1930s.

White grew up in the South during the 1920s and 1930s. He became a prominent race records artist, with a prolific output of recordings in genres including Piedmont blues, country blues, gospel music, and social protest songs. In 1931, White moved to New York, and within a decade his fame had spread widely. His repertoire expanded to include urban blues, jazz, traditional folk songs, and political protest songs, and he was in demand as an actor on radio, Broadway, and film.

However, White’s anti-segregationist and international human rights political stance presented in many of his recordings and in his speeches at rallies were subsequently used by McCarthyites as a pretext for labeling him a communist to slander and harass him. From 1947 through the mid-1960s, White was caught up in the anti-communist Red Scare, and as a consequence his career was damaged. However White’s musical style would go on to influence several generations of musical artists.

From the mid-1950s until his death in 1969 from heart disease in Manhasset, New York, White primarily performed in concert halls, nightclubs, and folk music venues and festivals around the world outside America.

However, in 1955, the brave young owner of a new American record company, Jac Holzman, who wasn’t afraid of the political pressure from the right or the left, offered White the opportunity to record again in his home country. He could only offer him $100, but he promised him artistic control and the best recording equipment available. They recorded the Josh White: 25th Anniversary album, which established Elektra Records and slowly began reviving White’s career by finding a young, new audience who made it possible for him to work again in America. Accordingly, his name and reputation in America has only begun to recover in recent years.

At the same time the UK guitarist and entrepreneur Ivor Mairants worked with White to create The Josh White Guitar Method (Boosey & Hawkes) in 1956. This was the first blues guitar instruction book ever published, and was an influential book for the fledgling UK blues and folk scene. The UK guitarist John Renbourn and the American guitarist Stefan Grossman (who was living in the UK at the time) have cited it as a critical influence on their playing, and in 1961 he starred in The Josh White Show for Granada Television (a franchise holder for the commercial ITV network) in the United Kingdom. 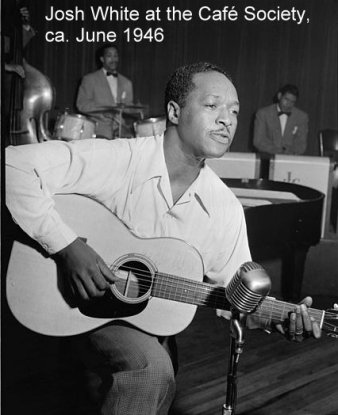 White’s blacklisting in the American television industry was finally broken in 1963, when President John F. Kennedy invited him to appear on the national CBS television’s civil rights special “Dinner with the President”. Kennedy told him how his records had inspired him when he was a college student in the Roosevelt era. Later that year he was seen again on national television performing for the masses on the steps of the Lincoln Memorial at the historic March on Washington.

In 1964, White gave a command performance for Lester Pearson, the Prime Minister of Canada, and in January 1965 he performed at the inauguration of President Lyndon Baines Johnson. In his final years, he would make American television appearances on The Merv Griffin Show, Hugh Hefner’s Playboy’s Penthouse and Hootenanny, among others. Meanwhile, he starred in two concert specials for national Swedish television in 1962 and 1967; starred in the 1965 ITV Network special Heart Song: Josh White in the United Kingdom (with guest artists Julie Felix and Alexis Korner); was a guest star on the Canadian CBC-TV program Let’s Sing Out with Oscar Brand in 1967; and made his final television appearance in May 1969 on the CBC-TV variety show One More Time.

In 1961, White’s health began a sharp decline after he had the first of the three heart attacks and the progressive heart disease that would plague him over his final eight years. As a lifelong smoker he also had progressive emphysema, in addition to ulcers, and severe psoriasis in his hands and calcium deficiency, which caused the skin to peel from his fingers and left his fingernails broken and bleeding after every concert. During the last two years of his life, as his heart weakened dramatically, his wife put him in the hospital for four weeks after he completed each two-week concert tour. Finally, his doctors felt his only survival option was to attempt a new procedure to replace heart valves. The surgery failed.

White died on the operating table on September 5, 1969, at the North Shore Hospital in Manhasset, New York.

Harry Belafonte, after learning of White’s death, said in an interview with the Associated Press, “I can’t tell you how sad I am. I spent many, many hours with him in the years of my early development. He had a profound influence on my style. At the time I came along, he was the only popular black folk singer, and through his artistry exposed America to a wealth of material about the life and conditions of black people that had not been sung by any other artist.”

White was in many senses a trailblazer: popular country bluesman in the early 1930s, responsible for introducing a mass white audience to folk-blues in the 1940s, and the first black singer-guitarist to star in Hollywood films and on Broadway. On one hand he was famous for his civil rights songs, which made him a favorite of the Roosevelts, and on the other he was known for his sexy stage persona (a first for a black male artist).[25]

He was the first black singer to give a White House command performance (1941), to perform in previously segregated hotels (1942), to get a million-selling record (“One Meatball”, 1944), and the first to make a solo concert tour of America (1945).[26] He was also the first folk and blues artist to perform in a nightclub, the first to tour internationally, and (along with Lead Belly and Woody Guthrie) the first to be honored with a US postage stamp.

White and Libby Holman became the first mixed-race male and female artists to perform together, record together and tour together in previously segregated venues across the United States. They continued performing off and on for the next six years, while making an album and a film together.

Josh White became a trademark of folk music with his brilliant performances of blues, ballads, gospel, and work songs. Listen to this wonderful album and you´ll know why …

The pioneering music of singer/guitarist Josh White is a reflection of American history throughout the 20th century; his songs depicting racial, social, and political situations during his turbulent lifetime.
(James Nadal)