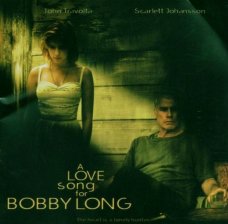 A Love Song for Bobby Long is a 2004 American drama film written and directed by Shainee Gabel. The screenplay is based on the novel Off Magazine Street by Ronald Everett Capps.
Eighteen-year-old Purslane (Pursy) Hominy Will leaves a Florida trailer park where she lives with her abusive boyfriend to return to her hometown of New Orleans following the drug overdose death of her jazz singer mother Lorraine, a free spirit whom Pursy had not seen for several years. The girl is startled to discover one-time Auburn University professor of literature Bobby Long and his protégé and former teaching assistant, struggling writer Lawson Pines, living in her mother’s dilapidated fixer-upper home. Both men are heavy drinkers who spend their days smoking numerous cigarettes, quoting Dylan Thomas, Benjamin Franklin, and T.S. Eliot, playing chess, and spending time with the neighbors while Bobby strums a guitar and sings melancholy country-folk songs. The two convince Pursy her mother left the house to all three of them, although in reality she is the sole heir and the time they legally are allowed to remain in it is limited by the terms of the will.
Pursy moves in and proves to be the most responsible and sensible member of the dysfunctional family the three create. The men’s efforts to drive her away gradually abate as they grow fond of her with the passing of time. Bobby – unshaven, slovenly, and suffering from ailments he prefers to ignore – attempts to improve the lot of the young girl by introducing her to The Heart is a Lonely Hunter and encouraging her to return to high school and get her diploma. Lawson, suffering from writer’s block, finds himself attracted to Pursy but hesitant to complicate his life further by becoming involved with her. Memories of Lorraine linger for all of them, especially Pursy, who vividly recalls her mother ignoring her in favor of pursuing a career. Her sense of who her mother was is altered somewhat when she finds a cache of letters Lorraine wrote her but never mailed, letters that lead her to discover not only how her mother really felt about her, but the true identity of her father as well. (by wikipedia)

And here´s the Soundtrack of this movie:
The soundtrack to Shainee Gabel’s directorial debut, A Love Song for Bobby Long, is steeped in the regional sounds of New Orleans. Based on the novel Off Magazine Street by Everett Capps, the film, starring Scarlett Johansson, Gabriel Macht, and John Travolta — the latter performs two cuts (“Barbara Allen” and the Howard Barnes/Don Robertson hit “I Really Don’t Want to Know”) — focuses on the grittier, blue-collar side of the Big Easy. Capps’ son, singer/songwriter Grayson Capps, provides three of the compilation’s most affective tracks, “Washboard Lisa,” “Love Song for Bobby Long,” and a gorgeous duet with Theresa Andersson called “Lorraine’s Song (My Heart Was a Lonely Hunter) — both have cameos in the film. Nathan Larson’s brief but powerfully atmospheric score appears twice, casting a long shadow of melancholy that permeates classic cuts from celebrated bluesman Lonnie Pitchford, Lightnin’ Hopkins, Magic Slim, and Big Bill Morganfield. Other highlights include Los Lobos’ previously unreleased “Someday,” an outtake from 1990’s Neighborhood, and Nada Surf’s achingly nostalgic “Blonde on Blonde,” rounding out a collection that effortlessly and continuously provides the listener with dusk-tipped emotionality and a succinct sense of place. (by James Christopher Monger)

Not only the perfect background music, but the backbone of a little and precious independent movie that blends together love, life, death, literature, music, loneliness, friendship, failures, heavy hungovers, redemption…
Young and talented songwriters (Grayson Capps, Nathan Larson), indie acts (Nada Surf, Trespassers William), blues legends (Lightnin’ Hopkins, Magic Slim & the Teardrops) and John Travolta himself (singin’ a couple of numbers including the traditional Barbara Allen) all cooperate to give birth to a collection of trembling and at the same time intimate songs that accompanies the story of the tortured existence of Mr Bobby Long & his Friends in a New Orleans never as charming and mysterious as here.
An hidden gem not to be missed. (by tenentedrogo) 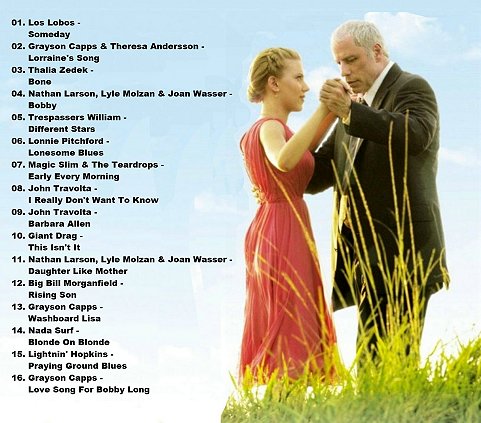 Thanks to greygoose for the tip !