Like many before me, my early interest as a teenager in jazz, funk and blues led me to the music of New Orleans. That interest piqued further when I found a collection of sides recorded for Atlantic by Professor Longhair in the 1950s at a public library , and then went out and bought everything I could get my hands on. Before long my ear wandered up the countryside to the bayous and swamps where music sounded a little different than in the city, namely to cajun and zydeco records. Not speaking any French, let alone Acadian or Creole, I couldn’t understand a word of much of it, yet I still felt like I connected to the music. Before the term ‘zydeco’ came into common musical parlance outside its region of origin, Clifton Chenier was said to have played “the blues accordion.” That description makes sense. Chenier, who had been recording since the early 60s, had a style capable of filling the space usually filled by a harmonica in a blues band and blending it with the piano or organ riffs you would expect from a keyed instrument. Reeds and keys together in one place. But his musical ladle also dipped into a stew containing fiddle tunes from around Louisiana’s “Cajun belt,” along with rhythm and blues, boogie-woogie, and early rock and roll music. His band briefly featured his brother Morris Chenier on fiddle in the 60s, but his lineups more typically counted on saxophone, electric guitar, bass, organ and piano to back him up. And he was always accompanied by his brother Cleveland on the washboard, who is credited with being the first washboard player to wear his instrument draped over the torso in a customized breastplate-type thing. Cleveland would tap out his rhythms using up to a half-dozen bottle openers in each hand.

This particular album has quite a few tunes that are fairly straight forward blues, and “Hungry Man” may strike many as being eerily close to a certain McKinley Morganfield song. It is also from the period when a young Stanley Dural (aka Buckwheat Zydeco) was playing keyboards with Chenier. It might be Dural (who previously played in a funk band) whose influence we hear on the one tune that deviates a bit from the rest on this album. “Party Down (At The Blue Angel Club)” is positively funky with a taste of wah guitar and some delicious sax riffs. Between the ballads and the burners there is one tune that cries out for fiddle, the waltz-time “Tante Na Na,” but Chenier’s accordion carries the day with grace and grace notes. The song is kind of a staple in a lot of dance band repertoires and I’d be interested in knowing its origins if there is anyone out there who knows. (All the tracks are attributed to Chenier, which seems like a bit of legal fiction by the folks at Arhoolie). The next track (Do Right Sometime) disposes with everything but the drums, washboard and the sax which just plays rhythm, but the chord changes somehow still sound fleshed out. 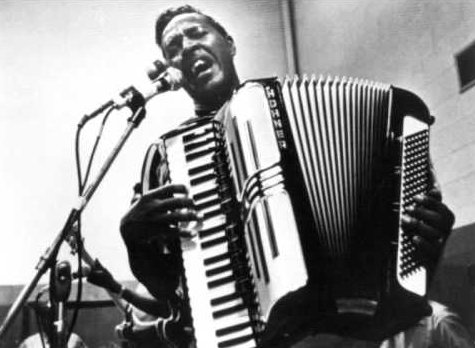 This is also a cool record because it catches Chenier’s band at an interesting time, riding a wave of mounting interest in the genre that he played a huge in creating. By the late 70s he could be found playing both the Montreux and New Orleans Jazz Festivals. But zydeco would become even more famous in the next decade, and Chenier himself would become the first zydeco musician to win a Grammy award. (flabbergasted-vibes.org) 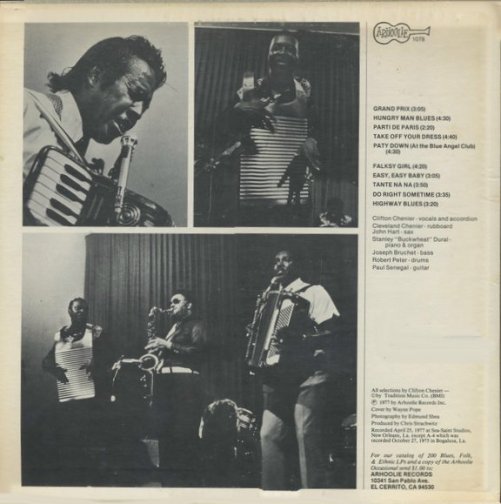 All songs written by Clifton Chenier 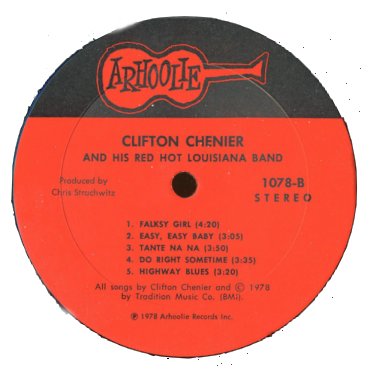 As with the blues, my favorite zydeco is the early stuff. As one of Clifton Chenier’s earliest albums, “Black Snake Blues” falls within the classic era. While sources conflict, we know that it came out in either 1966 or ’67. Released through Arhoolie Records, the album opens with the fantastic title track. It appears on a few Chenier compilations and for good reason. As the title suggests, ‘Black Snake Blues’ and the entire album is very bluesy. That said, ‘Let’s Talk It Over’ is straight-up zydeco. ‘Walking To Louisiana’ is a great tune featuring Chenier’s glorious accordion work. ‘Things Ain’t What They Used To Be’ is a slow blues tune. In contrast, ‘Wrap It Up’ is an upbeat shuffle. As would be hoped, there are a few songs like ‘I Love My Baby,’ that are sung in French. Much of the album plays zydeco with a strong infusion of country blues. As a notable exception, ‘I Got A Little Girl’ channels Chicago blues. Near the end of the song, it even sounds like the King of Zydeco lyrically references Robert Johnson’s ‘Sweet Home Chicago.’ Featuring bass and smokin’ electric guitar work, the tune makes for one of the album’s highlights. Along similar lines, “Black Snake Blues” makes for a strong Clifton Chenier album. (by Delite Rancher) 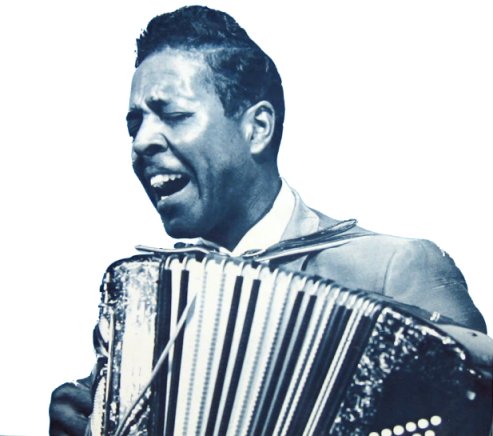 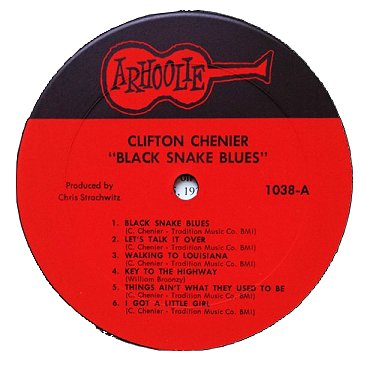