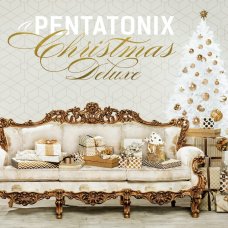 All years again … I want to present Christmas songs of all kinds this December as well.

Pentatonix (abbreviated PTX) is an American a cappella group from Arlington, Texas, consisting of vocalists Scott Hoying (baritone), Mitch Grassi (tenor), Kirstin Maldonado (alto), Kevin Olusola (vocal percussion and vocals), and Matt Sallee (bass). Characterized by their pop-style arrangements with vocal harmonies, basslines, riffing, percussion, and beatboxing, they produce cover versions of modern pop works or Christmas songs, sometimes in the form of medleys, along with original material. Pentatonix formed in 2011 and subsequently won the third season of NBC’s The Sing-Off, receiving $200,000 and a recording contract with Sony Music. When Sony’s Epic Records dropped the group after The Sing-Off, the group formed its YouTube channel, distributing its music through Madison Gate Records, a label owned by Sony Pictures. Their YouTube channel currently has over 19 million subscribers and 5 billion views. The group’s video tribute to Daft Punk had received more than 355 million views as of November 20, 2021. 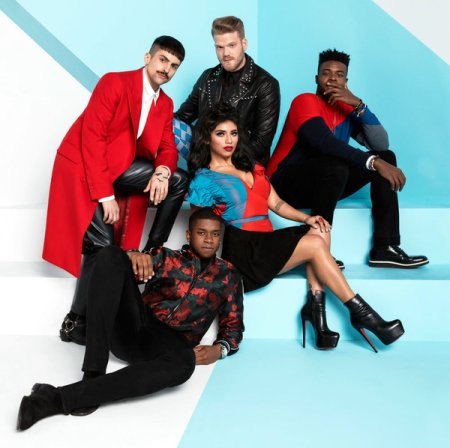 Their debut EP PTX, Volume 1 was released in 2012, followed by their holiday release PTXmas the same year, with Pentatonix’s third release, PTX, Vol. II, debuting at number 1 on Billboard’s Independent Albums chart and number 10 on the Billboard 200 in 2013. In May 2014, Pentatonix signed with RCA Records, a “flagship” label of Sony Music Entertainment, while in the same year, the group released their fourth EP, PTX, Vol. III, and two full-length studio albums; PTX, Vols. 1 & 2, a compilation album released in Japan, Korea and Australia, and their second holiday release, That’s Christmas to Me, with the album certified gold by the Recording Industry Association of America (RIAA), platinum on December 24, 2014, and double platinum on February 11, 2016, becoming the highest-charting holiday album by a group since 1962, and the fourth-best-selling album in the United States in 2014. The following year, Pentatonix released their eponymous album, their first consisting mostly of original material, which debuted atop the US Billboard 200 chart for the first time in their career, followed by a third Christmas album, A Pentatonix Christmas, in 2016, and a new EP, PTX, Vol. IV – Classics, the year after.

In September 2017, Avi Kaplan, the group’s original bass, left the group amicably and was replaced by Matt Sallee, who was featured on their next album PTX Presents: Top Pop, Vol. I.

Pentatonix have won three Grammy Awards: they were the first a cappella act to win Best Arrangement, Instrumental or A Cappella, doing so in 2015 and 2016, and Best Country Duo/Group Performance in 2017

A Pentatonix Christmas is the fifth studio album by American a cappella group Pentatonix. It is also their second full-length holiday album since That’s Christmas to Me in 2014. Featuring two new original songs, “Good to Be Bad” and “The Christmas Sing-Along”, A Pentatonix Christmas debuted on the Billboard 200 at number three with 52,000 albums sold in its first week, and later peaked at number one, selling 206,000 units in its best week. A Pentatonix Christmas marks as their second number one album on the Billboard 200 after Pentatonix. The album also debuted atop the Billboard Holiday Albums chart, their second number one on that chart after That’s Christmas to Me. The deluxe edition of the album dropped from number 6 to 200 on the Billboard 200 in 2018, the greatest drop for an album that still remained on the chart, in Billboard history. The album also, with a guest appearance by The Manhattan Transfer, marked the first recording by the fourth iteration of the group, as this was Trist Curless’ first participation with the group in a recording since the death of Tim Hauser, whom Curless officially replaced in 2014.

As of November 2017, 938,000 units of A Pentatonix Christmas have been sold in the US and 1,400,000 units worldwide. A deluxe edition was released on October 20, 2017, almost a year after the original’s release. The deluxe edition additionally marks the first appearance of replacement bass Matt Sallee and the second to last appearance of Avi Kaplan. (wikipedia) 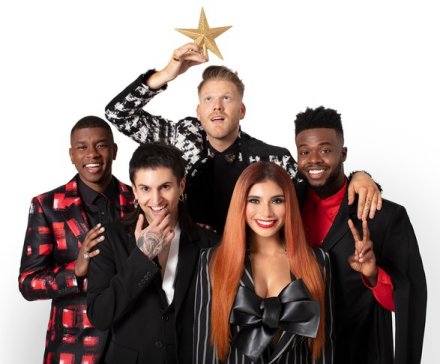 The second full-length holiday outing from the Arlington, Texas-based, 2011 Sing-Off-winning a cappella group, A Pentatonix Christmas delivers a colorful set of Yuletide emissions with ample amounts of spirit and a truly impressive command of harmony. Acrobatic takes on “God Rest Ye Merry Gentlemen,” “O Come, All Ye Faithful,” and “I’ll Be Home for Christmas” fit nicely alongside highlights from 2014’s double platinum-selling That’s Christmas to Me, but where the former only yielded one original offering, A Pentatonix Christmas unleashes two self-penned Santa jams into the world, the winking “Good to Be Bad” and the festive “The Christmas Sing-Along.” Also notable is a soulful rendering of “White Christmas,” which sees the quintet teaming up with a cappella, jazz fusion, and pop legends Manhattan Transfer. (by James Christopher Monger)

This is the third festive album from the incredibly talented and versatile Pentatonix. Each track has a different style or vibe, sometimes more than one in each track, and each sounds wonderful when you listen for the first time, then as you listen again and again (which you will, I have been playing this CD constantly since it arrived!), there are even more fine details to notice. These five exceptionally skilful young people are not only charming in person, but have a wealth of musical backgrounds and skills, and chose to bring them together to create groundbreaking a cappella performances. I can’t praise them highly enough, and am so grateful that my daughter heard about them – another bonus is that they appeal to all generations. (Dawn S)