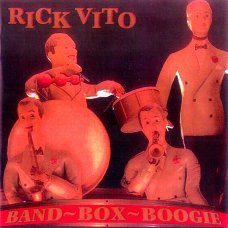 Why some American indie label doesn’t snatch up Rick Vito and turn him into the star he so rightfully deserves to be is beyond me. In the past four years Vito has released three brilliant albums, the most recent being the rollicking BAND BOX BOOGIE. While his strengths as a guitarist, songwriter and producer have long been evident, it’s his new found prowess as a singer that really stands out on the disc. If I had one quibble about the US release of the disc it would have to be the resequencing of the tracks, something that has resulted in a…less even flow…than that of the original European version. But that’s a minor point.The CD now opens with the sultry “Last Chance To Mambo.” A perfect blend of slinky guitars, delicate percussion, muted horns and hushed vocals, the song nicely (but only partially!) sets the pace for what’s to come. Next up is “Little Sheba”, with it’s hip-swaying groove and slightly nasty vibe. Once again, all the elements come together in a way that you just don’t see that often nowadays…the percussion accents things just right, the horns wail, the vocals cause you to sweat and the lyrics tell a torrid story. Brilliant! “Blues Town” is probably my favorite track on the disc. This is the kind of rockin’ number that has you shakin’ it in your seat by song’s end. I dare anyone to sit still during this song! The jumping horns are enough to get anyone going, but when Vito announces “Alright, move over, boys!” and cuts loose with the first of two impressive solos, you know this man is enjoying himself, and that joy is passed on to the listener. Things slowdown a bit (albeit only slightly!) with “The Ways Of Sin”, a swinging, swaying number that instantly transports you back to the first half of the 20th century. Awash in popping horns and brilliant guitar work (both acoustic and electric), this is one of the cuts that particularly shows what an all-around talent Vito has become. “Hungry Man” is roots rock & roll, pure and simple. The thinly veiled lyrics hark back to the early days of rock, while Jim Hoke’s sax playing anchors the song in a

sturdy, playful manner. Next up is the title track, a blazing instrumental that features some amazing picking and playing on Vito’s part. You can just picture him attacking the strings on his guitar! Add some sumptuous horn fills and you have a very impressive – and gritty! – effort! Then there’s “Where Did You Go Bettie Page?” With it’s finger-popping groove and clever lyrics (“Now she made a trip out to Hollywood/Bettie was ready and she was lookin’ so good/But things didn’t work out the way she planned/The town got hot and Bettie got scammed”), there’s both an innocence and insightfulness to the cut that’s extremely appealing. The same can be said about “Message From Mister Jordan”, a dream-induced tale about carrying on various musical traditions. When Vito sings “Play a blue guitar and bang on the drum/Have a real good time then pass it on down from the father to the son!”, you realize he’s on a mission, one that means a lot to him…and one that he’s succeeding brilliantly at (Once again, Jim Hoke’s sax work deserves special mention). Next up is “Baby’s In The Big House”, a goofy old romp that’s just flat-out fun. A number of friends that I have bought BAND BOX BOOGIE for have commented that they thought “The Gypsy Serenade” seemed out of place. I disagree. I think it’s a gorgeous instrumental track that allows the listener to kick back, take a breather and digest what they’ve heard thus far. This gentle track spills out of the speakers, floating about you until it wraps itself around you like a delicate silk shawl. Just gorgeous! Things do a 180 degree turn with the hopping “Rhythm.” This jumpin’ jive number once again transports you back to the 20’s, 30’s and 40’s. You feel the satin of the evening gowns as they brush up against you, you smell the gardenias in perfectly coifed hair, you see the crisp white tuxedo jackets of the band…how many songs today have the kind of power to do that to you? Another high point for BBB! Things wrap up with the blistering “I Can’t Stop Rockin'”, a giddy 50’s-esque rave-up, and “Jack Knife Jump”, a guitar-drenched instrumental that perfectly caps it all off. Finally, as per all my 2004 release reviews, I give the disc an extra half a star for including the lyrics. So, do yourself a favor and pick up Rick Vito’s BAND BOX BOOGIE…not only will you hear a master at work, but you’ll have a heck of a lot of fun while you’re doing it! (Amazon.com customer review)

Taken from the original liner-notes:

The “Band Box” was made in the fifties by the Chicago Coins company that also made pinball and other coin operated machines. Back then my brother Mark and I used to love to go to Joe Mauti’s pizza joint on the boardwalk in Wildwood New Jersey where they had one hanging up on the wall. My mom and dad would give us a few coins to play songs on

the jukebox, and when a record started playing, the curtain on the Band Box would glide open and the little musician figures onstage would then sway back and forth to the music of Louie Prima, Frank, and Dino. Very cool. Around twenty years ago I met an antique dealer near Philly who loved my pink 1965 T-bird and invited me to swap it for it’s worth in collectibles from his store. When I walked in, the first thing I saw was the Band Box shown on the CD cover! I snapped it up gave it to my brother at Christmas time. It now resides at his terrific deco comedy venue in Wildwood, the Club Casba.

The music on this recording was inspired by the kind of music I used to hear on those old Seeburg and Rockola jukeboxes. R&B, ballads, rock & roll, blues, Latin, and pop standards all played a part in the tapestry that became my musical influence. You can hear bits of my favorite guitarists like Les Paul, B.B. King, Django, Charlie Christian, Nato Lima, Teddy Bunn, Alvino Rey, and even Chuck Berry in these songs. They all played with fire and soul and I sought to capture some of that passion and fun here. If there is a theme to this recording, it might be found in the lyrics of one of the songs about a dream where I meet legendary R&B pioneer, Louis Jordan. Mister Jordan says, “Have a real good time, then pass it on down from the father to the son” Thanks, Louis! Rick Vito)