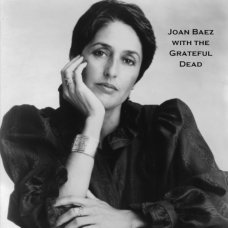 And here´s another fine rarity in this crazy, little blog:

A Joan Baez studio album with the Grateful Dead backing her, was recorded in late 1981, but never released !

And I never knew this existed.

Joan Baez was dating Mickey when this happened, which is a major reason why it was created.

And we can hear some real fine compositions of Joan Baez.

Her version of “Children Of The 80s” is much better than the one that was recorded later. And “Warriors Of The Sun”is another highlight … a perfect mix between the music of Joan Baez and Grateful Dead.

And her version of the Traditional “Jack-A-Roe” really fantastic  ..

And her “Happy Birthday, Leonid Brezhnev” was another example, that she was a very political person:

So … Listen and enjoy this rarity.

I guess this album was put together from different sources. because the sound differs from track to track.

Thanks to everyone who made these tracks available. And I add some more lyrics from this really interesting album.

All song written by Joan Baez,
except 08, which is a Traditional