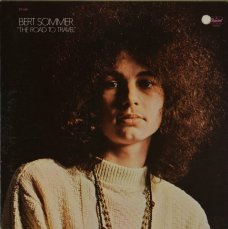 Bert William Sommer (February 7, 1949 – July 23, 1990) was an American folk singer, songwriter and actor. He appeared in the musical Hair and at the Woodstock Festival, and released several albums as a singer-songwriter.

Sommer grew up in Queens, New York, learned piano and guitar, and began writing songs when in his teens. He attended Woodlands High School. He became friendly with other young musicians and songwriters in the area, including Michael Brown and Leslie West, and wrote several songs for West’s band, the Vagrants, including their single “Beside the Sea”, co-written with producer Felix Pappalardi and his wife Gail.

In 1967, Sommer joined Michael Brown’s band, The Left Banke, as lead singer, replacing Steve Martin and co-writing their single “And Suddenly” with Brown, but the group soon fell apart following legal threats by Martin’s lawyers. Sommer also wrote “Brink of Death”, recorded by the band Childe Harold. Soon afterwards, he was recruited as a cast member of the musical Hair, soon being promoted to the role of Woof. His “frizzed-out Afro” hair and eyes featured on the playbill for Hair in 1969.

He was signed by Capitol Records, and in June 1969 released his first album, The Road to Travel, produced by Artie Kornfeld as were his next two albums. Kornfeld’s involvement with the Woodstock Festival led to Sommer being invited to perform there. He was the third act to perform on the opening Friday, August 15, 1969. He sang ten songs, including “Jennifer”, a song inspired by his fellow Hair performer, Jennifer Warnes, and Simon & Garfunkel’s “America”, after which he received the festival’s first standing ovation. However, because he was signed to a rival record label, a recording of his performance was not made publicly available until 2009.

Sommer’s second album, Inside Bert Sommer, was released in May 1970 on the Eleuthera label, a subsidiary of Buddah Records, and featured the single “We’re All Playing in the Same Band”, which reached number 48 on the Billboard Hot 100 in September 1970.

Sommer continued to perform in and around New York, often opening the bill for major acts such as Ike and Tina Turner and the Byrds. A third album, Bert Sommer, was released on Buddah in 1971 but, like Sommer’s other albums, was commercially unsuccessful. Sommer spent some time in a rehabilitation facility in the early 1970s, and then formed a trio, Sommer, Landis & Roberts, with Gary Roberts (also known as Johnny Rabb) and Rob Landis.

While Sommer continued to write songs, he returned to acting. After being encouraged to audition by music producer Artie Ripp, he appeared as “Flatbush” of Kaptain Kool and the Kongs on The Krofft Supershow in 1976, but did not reprise the role in the second season. In 1977, his fourth album, also titled Bert Sommer, produced in Los Angeles by Ron Dante, was released by Capitol Records, but was again unsuccessful and he was dropped by the label.

He returned to Albany in the early 1980s and continued to perform with Johnny Rabb in a band, The Fabulous Newports. He also continued to record demos in the hope of getting a record deal; one track, “You”, was featured in the films The Patriot and Stella. His last performance was in Troy on June 11, 1990, with Rabb.

Sommer died in Troy, New York on July 23, 1990, after a long battle with a respiratory illness. (by wikipedia)

Major labels were taking all kinds of chances on untested talent in the late ’60s, but although his name may have been unfamiliar to most in the industry, Bert Sommer was hardly untested. By the release of The Road to Travel, his 1968 debut, he had already written five songs for the Vagrants (founded by a pre-Mountain Leslie West, Sommer’s schoolmate) and sung lead vocals on the Left Banke’s single “Ivy, Ivy” through a friendship with that band’s Michael Brown. The Road to Travel shows that his well of inspiration had not yet run dry. With help from a conglomeration of friends and studio professionals, Sommer proved he was facile in a variety of styles — orchestral pop, acoustic folk, and some of the most sensitive singer/songwriter material heard before the style had fully flowered (with apologies to Tim Buckley). 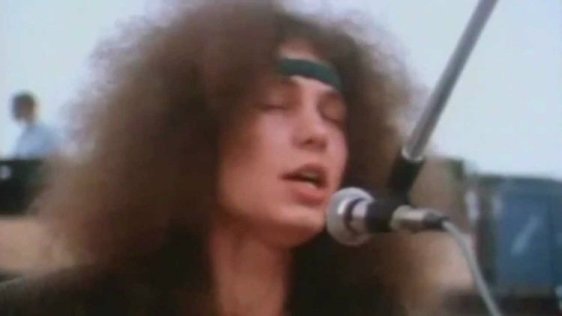 All of this was delivered in Sommer’s plaintive voice, although he was more convincing when he really let go than when he tried to rein it in. Anachronistically, he began the LP with the words “And when it’s over” (the title of the opener), moving quickly on the song from eerie Baroque pop to bombastic, brass-led art rock. That was a mere taste of what was to come, encompassing the hippie-dippie end of folk on “Jennifer” (the song Sommer gained raves for at Woodstock), straightforward sunshine pop for “Things Are Goin’ My Way,” and a curiously aggressive falsetto take on art rock for “Tonight Together.” Sommer’s power as a songwriter and performer was clear, but he was incredibly difficult to pin down. That may be what doomed The Road to Travel, but it has an undeniable flair. (by John Bush)

All songs written by Bert Sommer 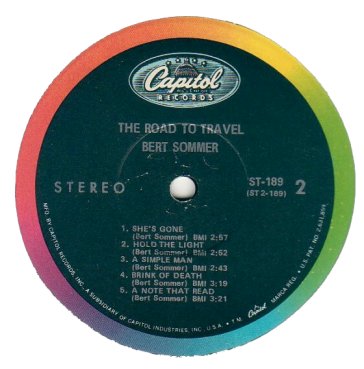