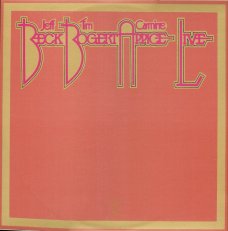 Although the all-star power trio of guitarist Jeff Beck, bassist Tim Bogert, and drummer Carmine Appice discussed a potential collaboration as early as 1970, the project went on indefinite hiatus after Beck suffered a fractured skull in an automobile wreck. With the guitarist on the sidelines for well over a year, Bogert and Appice — who previously teamed in Vanilla Fudge — opted instead to form Cactus with singer Rusty Day and guitarist Jim McCarty, issuing a series of boogie rock LPs for Atlantic before dissolving. In the meantime, following his recovery Beck founded a new incarnation of his Jeff Beck Group, releasing a pair of albums before disbanding the project in 1972; with Bogert and Appice again available, the threesome immediately set to work on recording, issuing Beck, Bogert and Appice to solid sales in 1973. A much sought after live album was subsequently issued in Japan only, but while working on a second studio effort, the famously mercurial Beck abruptly dissolved the trio in early 1974. (by Jason Ankeny) 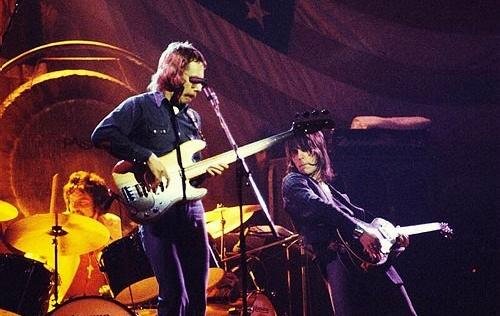 On this record, Beck can be heard heavily using a Heil Talkbox, two years before the release of Peter Frampton’s landmark album, Frampton Comes Alive! (1976). The album also contains renditions of songs originally recorded by the Jeff Beck Group, “Plynth”, “Going Down”, and “Morning Dew” and one Yardbirds number “Jeff’s Boogie”. (by wikipedia) 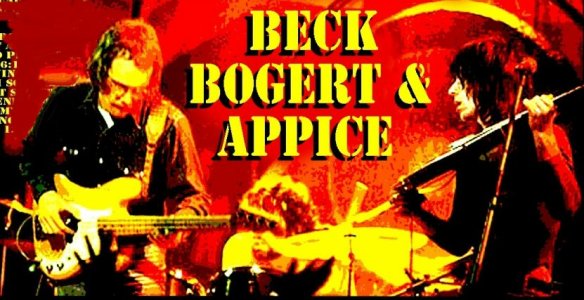 This is one of the best live albums of its era. The power trio format leaves nothing but room for the master, Mr. Beck, to play as few can. Not a note is wasted. I see from other reviews that people are less than satified with the abilities of Carmine and Tim. While their playing can indeed be over the top and bombastic at times, when they hit it right they become a powerful canvas for Jeff to paint over. The vocals? Who cares? Nobody buys this expecting stellar singing. Also, it should be noted that Led Zeppelin “borrowed” (that is the nice way of putting it) their entire template from both Jeff Beck and Carmine and Timmy’s older group Vanilla Fudge. So enjoy this for what it is, the originators of Heavy Rock doing it to death!!! (by G. Griffin)

This is Beck in his best, performed live!:
One of key attractions for me to purchase rock live albums is the live vibes and ambient created by scream of the audience (like Queen Killers). But with this Beck, Bogert, Appice power rock trio, it’s not the scream by the audience that matters most to me but . the improvisational work performed by these three powerful musicians. It’s awesome. Again, this album was very popular during my teenage years where I got the cassette version. We called this album as the “red” album by BBA, while the studio version as the “brown” album. Both we considered good albums but the red album has something much more to offer: the energy of rock music which is very obviously trajected by the three musicians. As this is a rare collection and the CD price is quite expensive for me, I only keep the cassette version that I have had it with me since teenager. 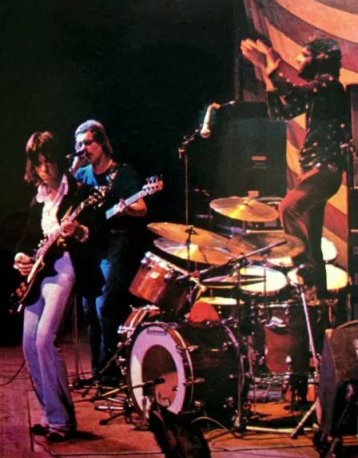 This album was in par excellent with live albums by other classic rock bands like Led Zeppelin “The Song Remains The Same”, Deep Purple “Made In Japan”, Grand Funk “Live” and Humble Pie “Live at Fillmore”. They were all so rockin’! Of course, all of them were part of musical listening zone during that age and I did enjoy them very much. As far as BBA concerns, I especially like how Beck explores his range of technical capabilities in sliding his guitar. It’s marvelous. No wonder, when in February 14, 2006 I had a dinner with Mick Box (Uriah Heep) he replied my question of “Who is your favorite guitar players?” with “Jeff Beck!”.

Of course, it’s not only Jeff Beck who rocked the audience during the the show in Japan. Tim Bogert also performed his tight and dynamic bass lines excellently while Carmine Appice not only providing beats for the rest musicians but he also played dynamically to create great grooves of the songs performed. Of course, the most legendary track is Stevie Wonder’s “Superstition”. But other tracks also excellent. “Jeff’s Boogie” and “Going Down” are also great favorite of all time. Having known how the band performed and how this record was so popular during 70s, I can only say that this is a gem of 70s that no one should miss.

Overall, it’s an excellent classic rock, performed live. You should not miss this album! (Gatot)

Beck, Bogert & Appice is the eponymous debut album by the ’70s band Beck, Bogert & Appice. They were a supergroup and power trio, with the line up of guitarist Jeff Beck (who had already been a member of The Yardbirds and The Jeff Beck Group), bassist Tim Bogert, and drummer Carmine Appice (both formerly members of Vanilla Fudge and Cactus). The album had solid sales in 1973. One of the most notable tracks is Beck’s version of the famous song of Stevie Wonder’s and his’ creation: “Superstition.”

This was the band’s only studio album, as Beck left the band without warning during the recording of their second album, forcing a sudden dissolution in 1974. (by wikipedia)

One of the great things about Jeff Beck is his utter unpredictability. It’s also one of the most maddening things about him, too, since it’s as likely to lead to flights of genius as it is to weird detours like Beck, Bogert & Appice. It’s hard to tell what exactly attracted Beck to the rhythm section of Vanilla Fudge and Cactus — perhaps he just wanted to rock really loud and really hard, beating Led Zeppelin at their own game.

Whatever the motivation, the end result was the same — a leaden album, with occasional interesting guitar work smothered by heavy riffs and rhythms that don’t succeed on a visceral level. It’s a loud, lumbering record that may be of interest for Beck archivists, provided they want to hear absolutely everything he did..(by Stephen Thomas Erlewine) 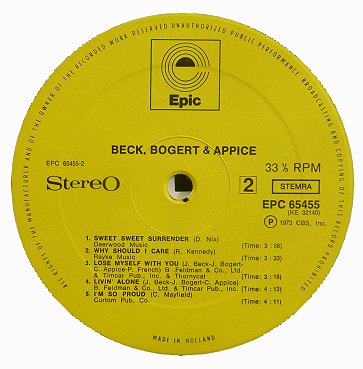