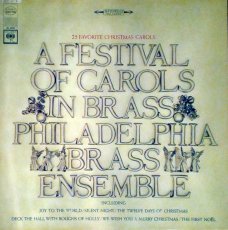 A Festival of Carols in Brass is the very definition of a Christmas “classic” — since it was first issued in 1967 it has never gone out of print, and the recording remains the number-one choice for brass-styled Christmas music played in shopping malls throughout the United States during the holiday season. This album by the Philadelphia Brass Ensemble contains 25 traditional carols that are arranged in a colorful but no-nonsense fashion. To vary the sound, the Philadelphia Brass Ensemble makes use of differing instrumental combinations between the various players, even within a carol, in addition to a sparing but tasteful application of mutes. As opposed to merely getting through a carol without mistakes and to everyone’s satisfaction, the Philadelphia Brass Ensemble takes the time to arrive at a blend of sound and work together on trying to make it as beautiful as possible, and it shows. CBS’ analog recording, though well nigh approaching the age of 40 years, is bright, spacious, clear, and not dated.

What a great sound … one of the finest christmas albums this year !