Declaring “I’m the Last of the Red Hot Mamas” in one of her best-known songs, Sophie Tucker created a brassy, bawdy persona that made her a smashing success on the vaudeville circuit and the musical stage. Tucker was born Sonia Kalish on January 13, 1884, as her Jewish parents were fleeing Russia for Poland and, by the time Sophie was three, the United States; the family took the last name Abuza as a cover during their flight. After a spell in Boston, her parents opened a restaurant in Hartford, Connecticut, where young Sophie met many a vaudeville entertainer and picked up spare change singing for them and other customers. Sophie married a man named Louis Tuck at age 16 and had a son, Albert, a year later, at which point Tuck left her. Changing her married name to Tucker to produce her stage name, Sophie moved to New York to pursue a singing career, initially performing at small cafés and beer halls. Tucker eventually got an agent, who helped her break into vaudeville in 1906. At the behest of her handlers, she usually worked in blackface early in her career, under the logic that since she was rather generously built and plain of face, her audiences might not otherwise take to her.

In 1909, Tucker landed a job with the Ziegfeld Follies; she was a headlining act by 1911, and when she finally dropped the blackface act in favor of gaudy costumes and began adding traditional Yiddish songs to her repertoire of risqué comic songs, sentimental ballads, and ragtime numbers, she allayed all unfounded fears about her appearance and became more popular than ever. 1911 also saw the first recording of one of Tucker’s signature songs, “Some of These Days.” During World War I, Tucker adopted jazz stylings and toured with a small group called the Five Kings of Syncopation; she also played from 1914-1917 with second husband Frank Westphal, a pianist, but their marriage dissolved over his jealousy of her popularity.

In 1919, Tucker landed her first Broadway role in Shubert Gaieties; two years later, she hired as musical director pianist Ted Shapiro, who would accompany her for the next 40 years, writing a great deal of her bawdier material as well. She made her first of many trips to London in 1922, starring in the revue Round in 50. Tucker scored hits in the 1920s with songs like a re-recording of “Some of These Days,” “I’m the Last of the Red Hot Mamas,” and “My Yiddishe Momme,” the latter two co-written by Jack Yellen, a regular contributor whom Tucker paid a regular salary plus commissions. As motion pictures began to rob vaudeville of its audience, Tucker tried to make the leap herself; she made her film debut in Honky Tonk in 1929, but the next year went to London to star in the musical comedy Follow a Star. For the next few years, she alternated London stage appearances with occasional films like Gay Love (1936), Broadway Melody of 1938 (1937), and Thoroughbreds Don’t Cry (1937). Tucker also appeared in several more Broadway shows, including Leave It to Me (1938), Gay Paree, and High Kickers (1941). 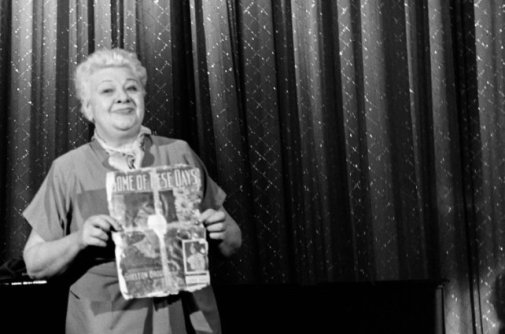 Tucker’s fame gradually diminished over the years; aside from occasional motion picture and television appearances, she spent most of her time performing in nightclubs, preferring the more intimate atmosphere and audience interaction. Her repertoire in later years often included half-spoken philosophical songs, which helped hide her vocal decline somewhat. Tucker devoted much of her income to various charities and frequently performed at benefit concerts. Sophie Tucker died on February 9, 1966, three years after becoming the subject of the biographical musical Sophie. (by Steve Huey)

On this crazy album we hear Sophie Tucker only on the first 4 tracks … with her half-spoken philosophical songs.

The rest of the album we hear the Ted Shapiro And His Orchestra with nice nice Cha-Cha-Cha insrumentals. 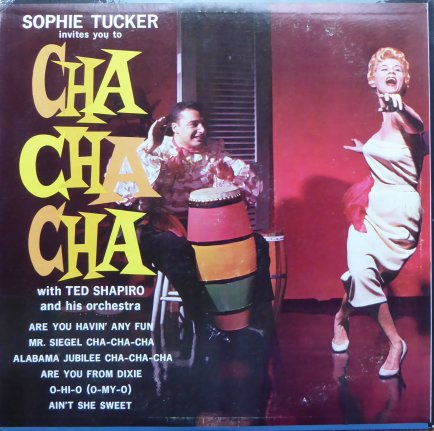 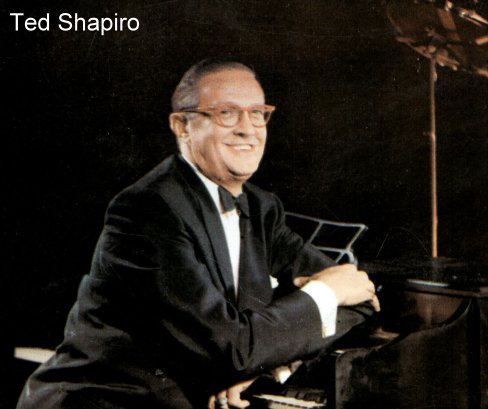 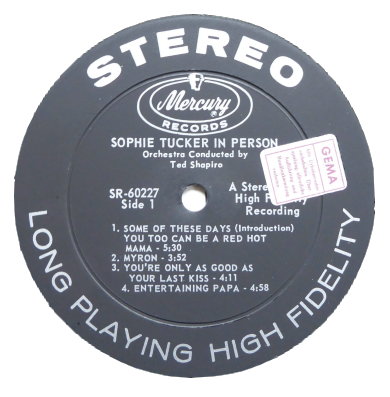