Bernard “Buddy” Rich (September 30, 1917 – April 2, 1987) was an American jazz drummer and bandleader. He is considered one of the most influential drummers of all time and was known for his virtuoso technique, power, and speed. He performed with Tommy Dorsey, Harry James and Count Basie, and led a big band.

Ustad Allarakha Qureshi (29 April 1919 – 3 February 2000), popularly known as Alla Rakha, was an Indian tabla player, who specialized in Hindustani Classical music. He was a frequent accompanist of sitar player Ravi Shankar. (by wikipedia)

Amd here´s a their album … and I´m very impressed:
This is one of those times when five stars isn’t really enough. I’m not on an expert on Indian music, but I really like it and have done for decades. I have dozens if not hundreds of Indian classical and Asian fusion albums, I took table lessons for a year or so, and I try to play the bansuri a little bit.
So I’m not really qualified to comment on the music in any technical way, but I was pleasantly surprised to find out that Paul Horn plays flute on this LP, and Ravi Shankar provided some compositions, and claps taal on one of the drum solos. Another cool thing is that none of the tracks are in teentaal (16 beats), which is a very serviceable and ubiquitous rhythmic structure in North Indian classical music. “Boring” would be too strong a word, but it’s nice to hear some different taals– 5 beats, 11 beats, and 6/8.
The liner notes are great, very educational, with brief artist bios, a little history of the recording, and some technical notes. Also some leads on more good music to seek out.

So, since I can’t say much on a technical level, here’s my experience: it’s a very, very enjoyable recording to listen to. I find myself dancing and beating rhythms on stuff every time I hear it, which I’m prone to do, but usually not quite this much.
So just a really good recording.

The other thing is, Alla Rakha’s personality really comes through. I’m much more familiar with his #1 son Zakir Hussain, and Alla Rakha has a different personality. Zakir is very sophisticated, and has a sense of humor that expresses itself in jokes, both verbal and musical. in fact he’s bit of a wise-ass. A great guy, wonderful personality, but very sophisticated and worldly. True to his Indian roots, certainly, but rooted in Western culture as well, lived with the Greatful Dead, all that. Alla Rakha, on the other hand, is more pure, one-pointed, strictly an Indian classical musician.

Of course he’s doing fusion here, and elsewhere, and had a lot to do with the development of Asian fusion and introduction of Indian music to the West, but he just does his thing, brings an unalloyed Indian style to the fusion experience. Not saying Rakha DOESN’T have a sense of humor, he does, but the experience, as one of the other reviewers said, is pure joy. And I’m not saying Alla Rakha is in any way less than Zakir. Of course he famously sang taals to his infant son after concerts, sent him to spend time with the Dead and so on; without him there’s no Zakir. (by Jerry Larsoni) 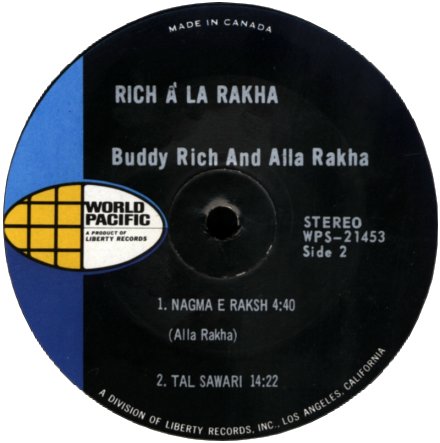