Jiřina Pokorná ranks alongside leading contemporary Czech organist. A native of Prague, she devolped her musical talent from early childhood. She obtained formal education in the class of the Prague Conservatory, under professor Kampelsheimer, and subsequently, under professor Milan Slechta at Praqgue´s Academy Of Music. She attracted of the musical public while still a student, and embarked on a full-time career as a concert artist in the 1960s.

Since then she has sucessfully represented the Czech organ school on concert tours, covering Germany, Austria, Belgium and Italy. Apart from that, she appeared in the former Soviet Union and Yugoslavia, and made a highly suscessful tour of Japan in 1991.

Miss Pokorná has combined her solo career with joints projects involving other prominent instrumentalists, including noteable trumpet player of the Czech Philharmonic Miroslav Kejmar and violinist Pavel Hula, as well as working with serveral leader chamber ensembles. Her art has been made available to record collectors on a number of titles released by various record labels. (taken from the original liner-notes)

Enjoy the beautiful organ music composed by one of the greatest compers in music history, Johann Sebastian Bach. 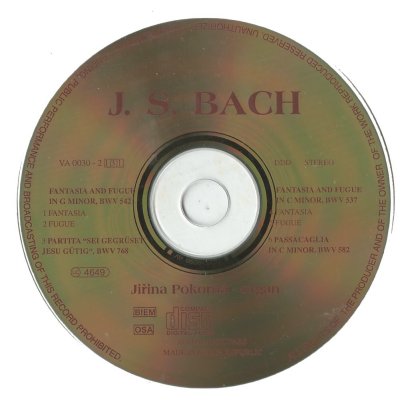