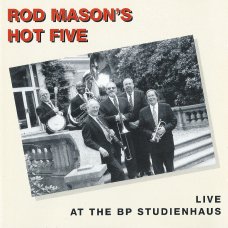 An excellent trad jazz trumpeter influenced by Louis Armstrong but having a sound of his own, Rod Mason has recorded quite a few worthwhile albums although little of his work is readily available in the United States. Mason, who has played dixieland-oriented music throughout his career, is the son of Frank “Pop” Mason who played drums with the Savannah Orchestra in England during 1928-31. Mason has performed with the who’s who of British trad including Cy Laurie (1959), Monty Sunshine (1962-66), Acker Bilk (1970-71), the Dutch Swing College Band (mid-1980’s) and Chris Barber (who appeared as a guest on one of Mason’s records) but he is most notable as a bandleader. Phil Mason, who has headed a sextet called his Hot Five along with a new Savannah Orchestra, has worked extensively in Holland and Germany in addition to England and recorded as a leader (starting in 1974) for WAM, Black Lion, Jeton and Timeless. (by Scott Yanow)

Rod Mason and his Hot Five were launched in 1985 when Rod moved to Germany. His six-piece drummerless band has been hailed as one of the very best in the Louis Armstrong tradition and they have toured throughout Europe and as far afield as South Africa and the USA. The band’s line-up lends itself to the jazz style of the 1920’s, though the repertoire ranges from early ragtime to vintage jazz, blues and boogie woogie, through to memorable contemporary
Rod Mason and his Hot Five have made countless television and radio appearances and a string of albums and CDs. Their live performances are an unforgettable blend of first class jazz, musicianship, entertainment, professional presentation and exciting solos…all mixed with sheer good humour in the finest British tradition.

And this is a wonderful example of this rich sound, listen to songs like “Si Tu Vois Ma Mere”, “Mackie Messer” (sung in German and English), “Angry” or “Devil’s Gonna Get You” and “Lili Marleen” and you´ll know what I mean.

Okay, this music is maybe old fashioned, but it´s music from the heart and it´s handmade music … we all should enjoy the sound of Rod Mason´s Hot Five ! 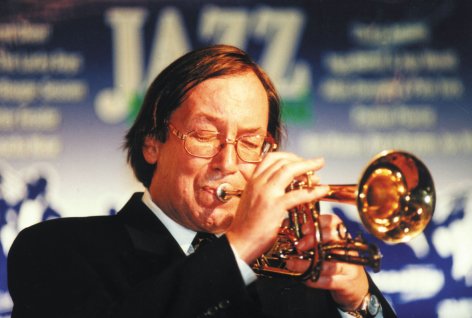 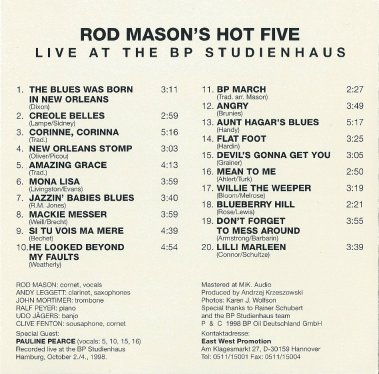