I guess, every serious fan ofRock & Jazz music should know this names:

A digital live recording of the trio in Freiburg, Germany, in April 1985. After their fine work the previous year with Spencer Davis, the tightness of York and Hodgkinson’s interplay on this release comes as little surprise. Auger makes for a fine third, though, with his electric piano lines wafting effortlessly over the rhythm section of “For No One.” Despite a long and loping cover of Donovan’s “Season of the Witch,” and a Hammond romp through a Jimmy McGriff number, the emphasis brought by Auger’s presence is on electric jazz-rock. The band even gamely covers a couple Billy Strayhorn chestnuts mid-show. Like the York/Hodgkinson concerts with Spencer Davis, though, it’s Hodgkinson’s solo bits that steal the spotlight. His sinewy “Catcote Rag” bass solo features some lovely glissando playing, and the “San Francisco Bay Blues” hearkens back to his string-shredding bass blues with Back Door. (by by Paul Collins)

What more can I say? Listen to this exciting and rare Jazz-Rock album … 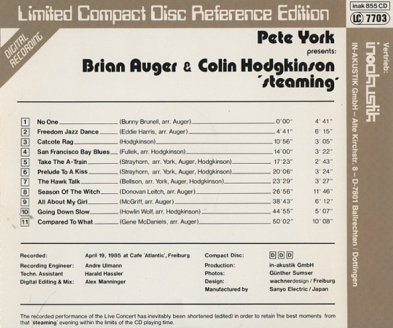