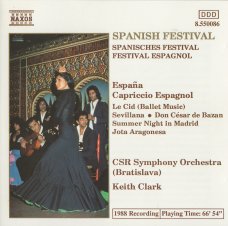 The Slovak Radio Symphony Orchestra (Bratislava), the oldest symphonic ensemble in Slovakia, was founded in 1929. The orchestra’s first conductor was Frantisek Dyk and over the past sixty years it has worked under the direction of several prominent Czech and Slovak conductors.

The orchestra has made many recordings for ranging from the ballet music of Tchaikovsky to more modern works by composers such as Copland, Britten and Prokofiev. For Marco Polo the orchestra has recorded works by Glazunov, Glière, Rubinstein and other late romantic composers and film music of Honegger, Ibert and Khatchaturian.

And this is a collection of spnish influenced music: The selection of pieces is great– these are all great pieces of classical music with strong Spanish influence. However, the performances lack fire and often come across as mechanical. They get close, but don’t quite do the pieces justice. (by an amzon customer). 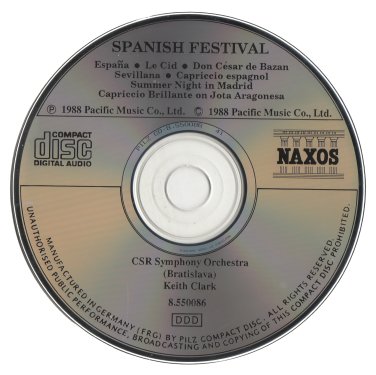