Kühn was a musical prodigy and made his debut as a concert pianist, having studied classical piano and composition with Arthur Schmidt-Elsey. Influenced by his elder brother, clarinetist Rolf Kühn, he simultaneously got interested in jazz. In 1961 he became a professional jazz musician. With a trio of his own, founded in 1964, he presented the first free jazz in the GDR. In 1966 he left the country and settled in Hamburg. Together with his brother he played at the Newport Jazz Festival and recorded with Jimmy Garrison for Bob Thiele’s Impulse! Records.

Kühn has lived in Paris since 1968, and worked with Don Cherry, Karl Berger, Slide Hampton, Phil Woods, Michel Portal, Barre Phillips, Eje Thelin, Ray Lema, Hellmut Hattler, and Jean-Luc Ponty. As a member of Pierre Courbois’s Association P.C., he turned to electronic keyboards. During the second half of the 70’s he lived in California and joined the West Coast fusion scene and recorded with Alphonse Mouzon, Billy Cobham, Michael Brecker, and Eddie Gómez.

Having settled near Paris again, he played in an acoustic trio with Jean-François Jenny-Clark and Daniel Humair since 1985. In the summer of 1996, he joined Ornette Coleman for two concerts at the Verona and Leipzig festivals, which opened the way for his Diminished Augmented System. More recently he has toured with Rabih Abou-Khalil and Joachim Kühn Trio with Christian Lillinger and Johannes Fink. (by wikipedia)

And this is a rare Joachim Kühn recording: this album was released in Germany and Japan only.

Originally it was released as a LP in 1981, a few years later as a CD. And this album featuring musicians like Michael Brecker, Eddie Gomez, Bob Mintzer and Mark Nauseef is a real great jazz-album … listen and you´ll know what I mean … 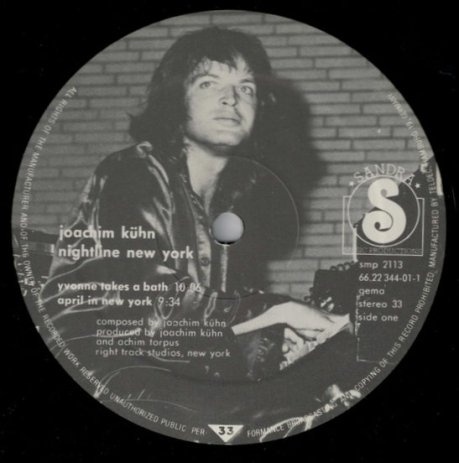 All compositions written by Joachim Kühn