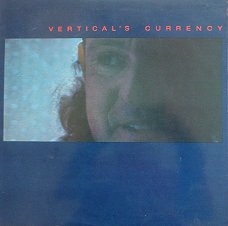 Hanrahan was born in a Puerto Rican neighborhood in the Bronx to an Irish-Jewish family. He has an unusual role in the albums released under his name, one which he has analogized to that of a film director. He assembles players and materials, combining modern/avant-garde/free jazz figures like Don Pullen and Steve Swallow, Latin jazz players such as Milton Cardona and Horacio “El Negro” Hernandez, and occasionally rock musicians like Sting, Jack Bruce and Grayson Hugh, also Bassist,singer,song writer,producer Fernando Saunders.

He produced a number of significant recordings by the nuevo tango master Ástor Piazzolla in the last decade of Piazzolla’s life, as well as recordings by Latin music figures including Jerry Gonzalez. Hanrahan also worked with the poet Ishmael Reed on three recordings with the Conjure Ensemble, featuring Taj Mahal on the first release. These side projects were not the only poetry-based discs: Darn It from 1994 celebrates the work of Paul Haines (by wikipedia) 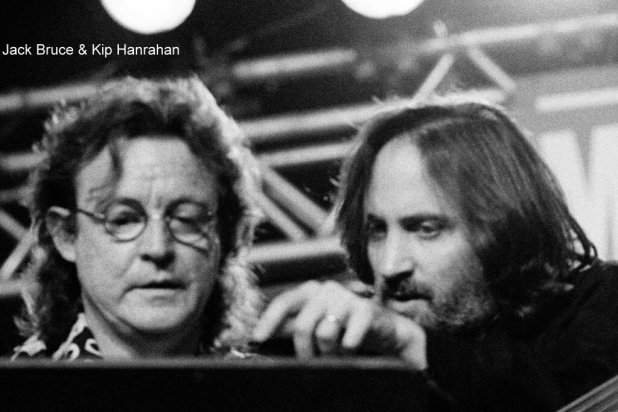 Sting founded the Pangea label in the mid-’80s, unearthing some important and overlooked recordings from the defunct American Clave catalogue, much to the delight of ears lucky enough to hear (as a side note, some of tango sensation Astor Piazolla’s most important work would be lost were it not for the mining of such treasure). Such is the case for Kip Hanrahan, a soulful, New York-based percussionist and producer who unleashed two particularly fantastic albums — Days and Nights of Blue Luck Inverted and Vertical’s Currency — a lush, sensuous Afro-Cubano feast for the ears that is so warm as to engulf the listener with flames. There is a wonderful spirit to “Shadow Song,” an instantly recognizable anthem of Ricky Ricardo cliché that roars with boisterous horn arrangements, congas, cowbells, and vocals of uncanny, third-person self-analysis: “Today I have these blues that are wittier than me/That jokes with my girlfriend while drinking my rum.” “Smiles and Grins” follows with tight polyrhythms that snap and clap along with syncopated piano clusters, as vocalist Jack Bruce hurriedly lilts beat poetry through the chord changes that only twice pause for contemplation. 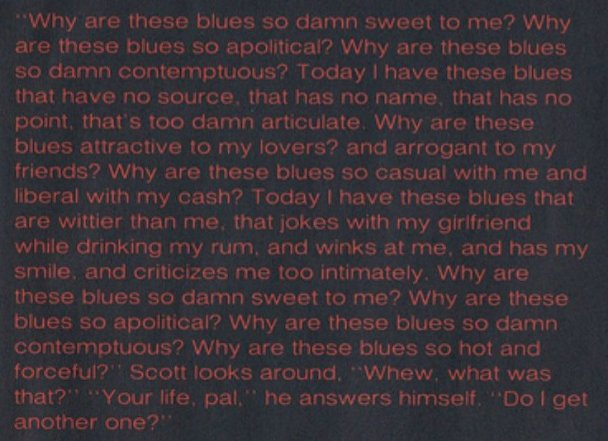 Elsewhere in the disc there is an element of sultry longing and hot Miami sunsets, as with “Two Heartedly, To the Other Side,” “Make Love 2,” and “Dark (Kip’s Tune).” It is with this all-star cast of the New York underground jazz fusion scene that Hanrahan finds such rich moods, textures, and symbiosis. Steve Swallow on the bass rarely disappoints, and both guitarist/avant-gardist Arto Lidsay and keyboardist Peter Scherer, who together comprise the group Ambitious Lovers, fill out the room with equally reliable musicianship. Vertical’s Currency overflows with rich contributions in an organic stew of worldly fusion that slinks through the city streets after hours. Find this album and pounce on it. (by Keir Langley) 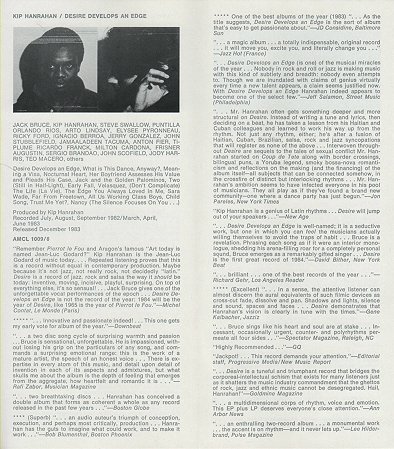 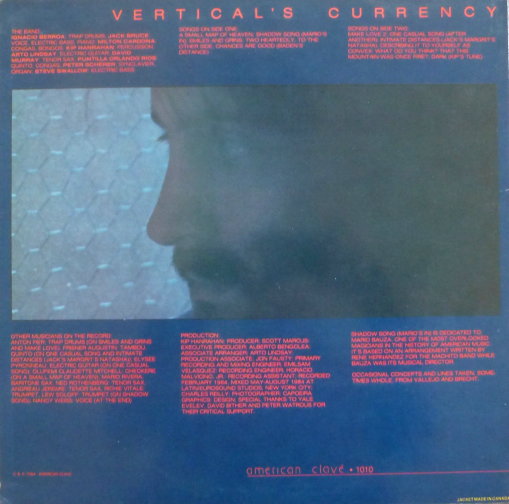 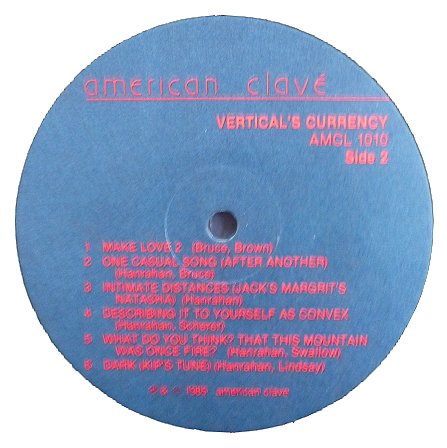