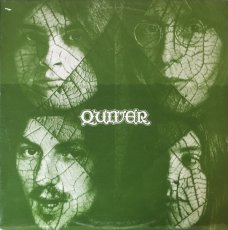 Quiver was a melodic UK progressive rock band, Quiver occasionally followed a country rock path but achieved more success following their merger with the Sutherland Brothers. The line-up comprised Tim Renwick (b. 7 August 1949, Cambridge, England; guitar, vocals, flute) and Cal Batchelor (guitar, vocals, keyboards). Renwick had formerly been with Junior’s Eyes, and he and Batchelor recruited Cochise drummer John ‘Willie’ Wilson (b. 8 July 1947, Cambridge, England). Subsequently, the line-up of Wilson, Renwick, Batchelor, and ex-Village bass player Bruce Thomas (b. 14 August 1948, Middlesbrough, Cleveland, England; bass/vocals), recorded the self-produced Quiver. For the recording, they were augmented by Dick Parry (saxophone). The same line-up recorded Gone In The Morning, but due to lack of commercial success the band was subsequently dropped by Warner Brothers Records. The members were not coming up with new songs, and so they decided to join the Sutherland Brothers, the two line-ups merging in late 1972 with the addition of Pete Wood (b. Middlesex, England, d. 1994, New York, USA; keyboards). 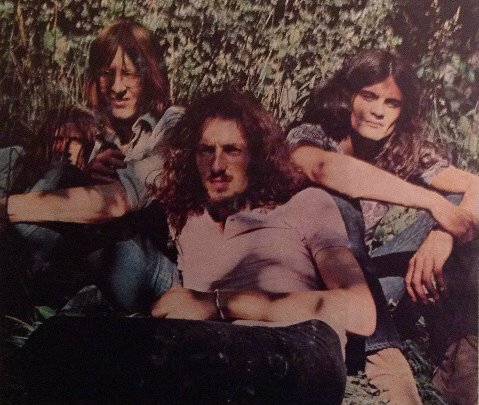 Shortly afterwards they were signed to Island Records, and with a number of personnel changes, achieved a degree of chart success. Renwick went on to form 747 and Kicks and is now an in-demand session guitar player, touring with bands such as Pink Floyd and Mike And The Mechanics. Wilson plays with the Coyotes, and Thomas with Elvis Costello’s backing band the Attractions. Quiver’s greatest claim, however, is being the first ever band to play the legendary Rainbow Theatre in London. (by allmusic)
I give this release 4 stars because the playing is just so good.Where it falls down slightly is due to the lack of really memorable tunes.When they palled up with Iain and Gavin Sutherland the Sutherlands got a red hot band to replace the workmanlike but dull band on their debut album and Quiver got some tunes and what tunes they were.Tim Renwick is one of my favourite guitar slingers,his work on Al Stewarts “Modern Times” album is ace. (woody123) 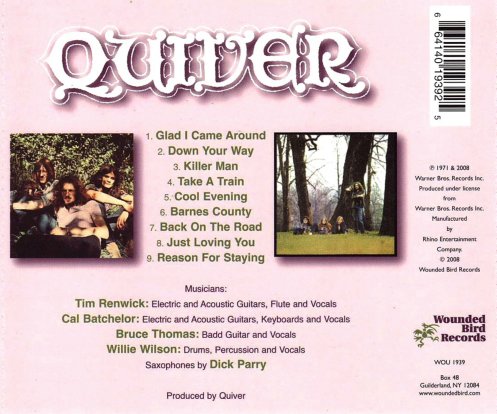 One of my all-time favorite albums but I can see that is not the case with most reviewers. It’s kinda mellow country rock with a couple toe tappers. The guitar player is masterful and the bass player is excellent.

I guess it takes a few listens and some mental adjustments but I think this is an outstanding recording. It just pushes all the right buttons for me and I seem to be alone in that regard.

Killer Man is a killer track and Tim Renwick is a killer guitarist. From the best year for music ever … 1971. (rod45)

Surprising progressive folk band. Its progressiveness derives of the fact that Quiver plays a folk rock in a low pace with elaborated arrangements and excellent execution of instruments. An special comment deserve the bass player (Bruce Thomas). Voices are relaxed and the band do harmonies, according to the general ambient: relaxed and beautifully executed.
Some songs are normal folk songs, But some songs like “Cool Evening” are extra reflective songs including flutes to create the ambience.
t’s hard to understand why the low rate as this band deserve more. IMHO people who likes folk with an special touch can’t miss this first attempt of Quiver band. (DaremoS)

US front + back cover 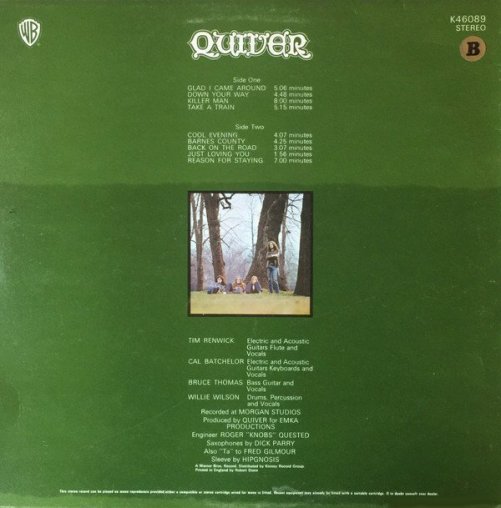 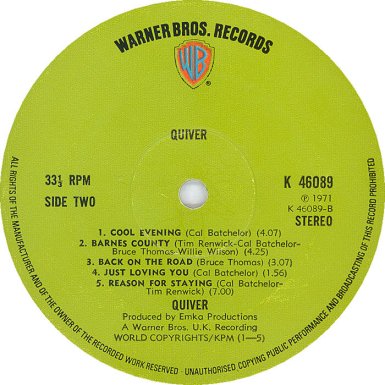 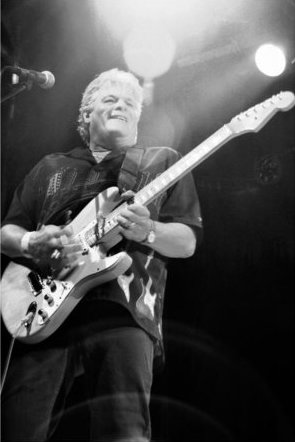 Cal Batchelor has been a long time fixture in the music scene both here (Canada) and in the UK.
Born Calvin Batchelor, he was a fantastic Canadian guitarist (also a skilled keyboardist).
Cal went to England in 1969, and he helped form Quiver. They were the first group to play at Rainbow Theatre in London (supporting The Who). After leaving Quiver, Cal formed a band called 747. He then joined Long John Baldry for a while (as supporters for Faces). There, he met Ronnie Lane, joining his band later.
In February 1977, Cal formed another notable band called Kicks. In the 80s, Cal returned to Canada. He fronted his own Cal Batchelor Band for a number of years in Vancouver.

Cal’s beloved wife Yvonne passed away in recent weeks from cancer, and Cal certainly missed her in his life. Cal passed away on Sunday December 20, 2015. (rcmusicproject.com)