Neil Peart, the drummer and lyricist for Rush, died Tuesday, January 7, in Santa Monica, California at age 67, according to Elliot Mintz, a family spokesperson. The cause was brain cancer, which he had been quietly battling for three-and-a-half years. A representative for the band confirmed the news to Rolling Stone.

Peart was one of rock’s greatest drummers, with a flamboyant yet utterly precise style that paid homage to his hero, the Who’s Keith Moon, while expanding the technical and imaginative possibilities of his instrument. He joined singer-bassist Geddy Lee and guitarist Alex Lifeson in Rush in 1974, and his virtuosic playing and literate, wildly imaginative lyrics – which drew on Ayn Rand and science fiction, among other influences – helped make the trio one of the classic-rock era’s essential bands. His drum fills on songs like “Tom Sawyer” were pop hooks in their own right, each one an indelible mini-composition; his lengthy drum solos, carefully constructed and full of drama, were highlights of every Rush concert.

In a statement released Friday afternoon, Lee and Lifeson called Peart their “friend, soul brother and bandmate over 45 years,” and said he had been “incredibly brave” in his battle with glioblastoma, an aggressive form of brain cancer. “We ask that friends, fans, and media alike understandably respect the family’s need for privacy and peace at this extremely painful and difficult time,” Lee and Lifeson said. “Those wishing to express their condolences can choose a cancer research group or charity of their choice and make a donation in Neil Peart’s name. Rest in peace, brother.” (by RollingStone.com)

This recently-unearthed gem has been the subject of a lot of controversy. First of all, it wasn’t even widely know that Rush played this date. But there’s no doubt that he’s greeting Frankfurt during the intro. Next, the setlist itself raises some questions. It’s common knowledge that Rush dropped “Something For Nothing” and “Cygnus X-1″ for most of the German shows on this tour. Yet, they appear here. When this show was first circulated, it was without these two songs. On recent releases, they have been added to the mix. A splice is clearly audible where the addition occurs, yet it sounds like these songs belong in the mix, as they blend well with the rest of the show. Legend has it that this show was leaked by Skip Gildersleeve himself. Originally, SFN and CX1 were cut so that the show would fit on a 90-minute tape. Later, upon request, Skip sent out the two missing songs. Hence the splice. Decide for yourself whether you believe all of this. Personally, based on the sound alone, I think the songs belong. (If they don’t, it raises the question of where they came from. Clearly, they are from a board, but they are definitely NOT from the two other know boards from this tour – 11/20/78 and 12/2/78. So if they aren’t from this show, that suggests the existence of yet another soundboard show from this tour. Perhaps time will tell). Soundwise, the show is incredible. It’s right up there with the Tucson and Detroit shows, and you all know how good THAT is. The performance is also outstanding, especially since we are treated to an uncut version of “Hemispheres.” A definite must-have! (Ron’s Rush RoIO Guide)

Taken from a newly obtained source and remastered for the best sound possible for this source. A long hoarded recording that has taken many years to get out into the common trading circles. It had been long rumored that the show existed, but no one would trade it unless you complete an obstacle course to get it. Well the friends of Digital Reproductions came through again and acquired this magnificent source for every Rush fan to savor. This show is the soundboard and not a broadcast performance as there are no DJ interruptions whatsoever. And unlike the Tucson show, we finally have both a full show and an uncut version of Cygnus! Well this sounds better than any currently produced commercial version of the Tucson ‘78 show save (A Desert Passage) and a bit better than Buenos Nochas! Motor City. The source is extremely low gen, 1st gen for the majority of the show and 2nd gen for the Drum Solo. Everything is crystal clear with very little tape hiss to be heard anywhere in the recording. It is great to hear a fully uncut version of Cygnus X-1 and Hemispheres. The boys sound great on this night, Geddy is hitting the high notes with Neil putting down a firm foundation for Alex’s searing solo’s. The bass is really pronounced as is the high end, if not a bit bright. If you are a die hard Rush fan, you cannot be without this show. (The Digital Dan)

There is of course controversy with the setlist as some believe that it is incorrect. I have about 99 per cent confidence now that the show never had SfN and CX1 even though sources very close to the band said that those songs were played that night. If you prefer the SfN and CX1 not being part of the setlist, simply extract all the audio tracks to your hard drive, delete the two tracks in question and re-burn the cdr. The tracks will line up correctly and sound just like a continuous concert… If someone tries to sell it to you, you are being ripped off as any one of many Rush traders will gladly do it for free. (by bigo magazine) 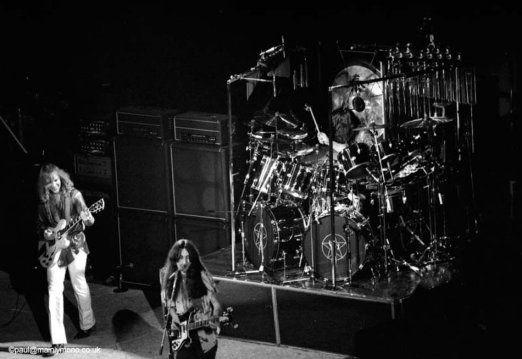 From Ian Grandy (Rush’s sound engineer who recorded the show): (via personal email, June 2007) “I was the engineer for Rush in those days. The added two songs were recorded at the Hammersmith Odeon in London earlier on that tour. When we went to Europe those two songs were dropped because the band was playing a shorter set. I edited them in when I got home. The tape was originally called two different things, Alex’s copy was called ‘Blitzkrieg’ and Geddy’s was called ‘Road to Germany’ after the old Bing Crosby & Bob hope ‘road’ movies. I always loved that tape and I only recorded that day because the sound in the hall was excellent. There was a lot of low end naturally and that’s why the tape w/b a little high endish. I think half the crowd was American servicemen stationed in Germany. You say Skip released that tape but I don’t know that he ever had a copy, I sent a copy to a guy in Hartford CT who used to call me in 1994 so that might be where it started. I doubt that Alex or Geddy gave their copies away…” (digitalrushexperience.com)

Recorded live at the Stadhalle, Offenbach, Germany; May 28, 1979.
Excellent soundboard. 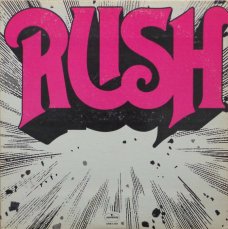 Originally the recording sessions were produced by Dave Stock at Eastern Sound Studios in Toronto. They were scheduled late at night during the ‘dead’ time in studios because of the band’s low budget and the rates during this period were the cheapest. Stock had also worked on the band’s debut single (a cover of Buddy Holly’s “Not Fade Away”, with an original composition, “You Can’t Fight It”, on the B-side). “You Can’t Fight It” was to be included on the album but was scrapped. Two of the Eastern Sound recordings, “In the Mood” and “Take a Friend” were included on the final album.

However, Rush were unhappy with the quality of the first sessions. They moved to Toronto Sound Studios and produced the next sessions themselves while achieving a significant improvement in recording quality. They added new overdubs to existing backing tracks of “What You’re Doing”, “Before and After” and “Working Man”. The tracks with the most advanced production were recorded entirely at Toronto Sound: “Finding My Way”, “Need Some Love” and “Here Again”. These new songs took the place of recordings from the earlier sessions. Both studios used 8-channel multitrack recorders, which was quite primitive for 1973, but the group quickly learned to make the best use of the technology that was available. 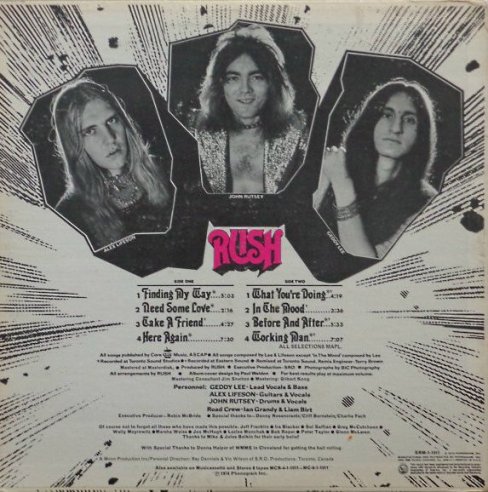 The band and its management formed their own company, Moon Records, and released the album in Canada. Only 3,500 copies of the original Moon Records LP (catalogue number MN-100) were pressed. The first version of the LP has a cream-coloured label with a blue Moon Records logo and black type.
The album was soon picked up by WMMS, a radio station in Cleveland, Ohio. Donna Halper, a DJ working at the station, selected “Working Man” for her regular play list. Every time the song was played the station received phone calls asking where to buy the record. Copies of the Moon Records album were imported to the Cleveland area and quickly sold out.

In the 2010 documentary film Rush: Beyond the Lighted Stage, Halper says that “Working Man” was the perfect song for the Cleveland rock audience, as it was still mostly a factory town in 1974. WMMS later sponsored one of Rush’s first performances in the United States, on August 26, 1974 in Cleveland.
The record’s popularity in Cleveland quickly led to the re-release of the album by Mercury Records. The first Canadian Mercury release on the standard red Mercury label is nearly as rare as the Moon version. It also had the Moon number MN-100 between the run-out grooves, indicating that it was pressed from the same metal stampers as the Moon disc. “A special thank you to Donna Halper” was added to the album credits of this and all later versions.
At this point manager Ray Danniels scraped together an additional $9,000 for producer Terry Brown to professionally re-mix all of the recordings for better sound quality. This remix version was used for later releases most of which used the Mercury “skyline” record label instead of the red label. A later Moon Records version of undetermined origin has a pink label with grey moon craters.
The original album logo was red, but a printing error made it appear more pink in colour. This is one of two Rush albums where the cover artwork had printing errors (the other album is Caress of Steel). (by wikipedia)

Rush’s self-titled debut is about as uncharacteristic of their renowned heavy progressive rock (perfected on such future releases as Hemispheres, Moving Pictures, etc.) as you can get. Instead of complex arrangements and thoughtful lyrics, Rush sounds almost identical to Led Zeppelin throughout — bluesy riffs merged with “baby, baby” lyrics. The main reason for the album’s different sound and direction is that their lyricist/drummer, Neil Peart, was not in the band yet, skinsman John Rutsey rounds out the original line-up, also consisting of Geddy Lee (bass/vocals) and Alex Lifeson (guitar). It’s nearly impossible to hear the anthemic “Finding My Way” and not picture Robert Plant shrieking away, or Jimmy Page riffing on the jamfest “Working Man,” but Rush was still in their formative stages. There’s no denying that Lee and Lifeson were already strong instrumentalists, but such predictable compositions as “In the Mood” and “What You’re Doing” prove that Peart was undoubtedly the missing piece to the puzzle. While longtime Rush fans can appreciate their debut because they never returned to this style, newcomers should stick with their classics from later years. (by Greg Prato) 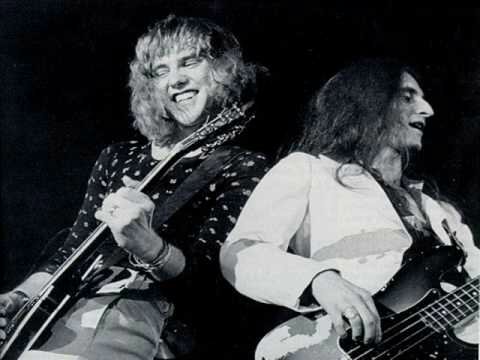