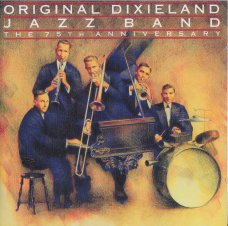 The Original Dixieland Jazz Band, who billed themselves “The Creators of Jazz”, have long been been dismissed as the White guys who copied African-American music, and called it their own. There is a lot of truth to that statement, but on the other hand, The Original Dixieland Jazz Band’s recordings still hold their own unique charm, over 80 years after their initial release. However unfair and indicative of the racism of the era, the record “Livery Stable Blues”, coupled with “Dixie Jass Band One Step” became the first Jazz record ever released on February 26, 1917 for the Victor Talking Machine Company. It was wildly successful. Its release signaled the beginning of the Jazz age and helped define the wild, exuberent era we call the “Roaring Twenties”. The Original Dixieland Jazz Band had recorded for Columbia in January 1917, but the session was unsuccessful and the band had to come back and re-record the songs, thus the release of the Columbia sides did not come about until after the amazing success of the Victor records. The group had formed in New Orleans, all of the musicians had played in Papa Jack Laine’s Reliance Brass Band at one time or another. 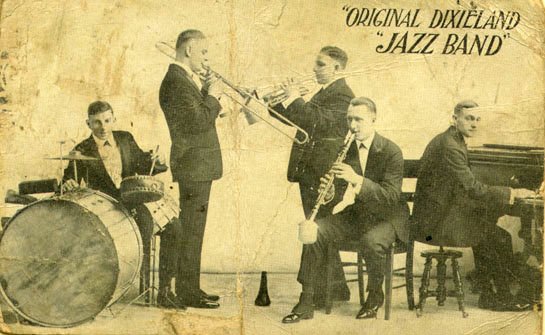 In 1916 the band moved from New Orleans to Chicago, just like so many of the African-American and Creole musicians from that city. In Chicago, they played a season at the Booster Club under the name of Stein’s Dixie Jass Band. At the beginning of the following year the band ditched Stein and moved to New York where, on the recommendation of Al Jolson, they landed a gig at Reisenweber’s Café on Columbus Circle and 58th Street, a fashionable restaurant and night-spot. The band created quite a stir and Columbia rushed to record the band only two weeks after they had arrived in the city. The band was an immediate success, with their wacky stage antics, like wearing top hats that spelled out “Dixie”, playing the trombone’s slide with the foot, and so on. The band’s slogan was “Untuneful Harmonists Playing Peppery Melodies”, and their leader Nick La Rocca and cornet player delighted in stirring up the press, describing themselves as musical anarchists and coining fun statements like “Jazz is the assassination of the melody, it’s the slaying of syncopation”. 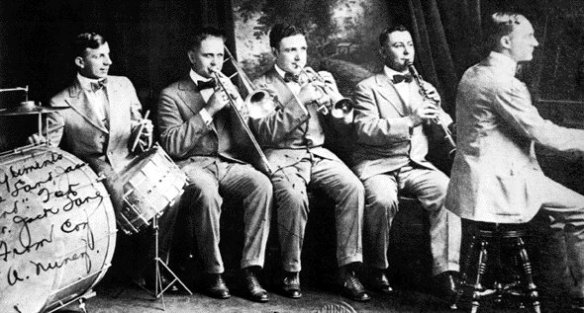 After the Reisenweber’s Café engagement end the band played at the Alamo Cafe (148th Street) and the College Inn at Coney Island. The Original Dixieland Jazz Band went on to record and play in London, producing 20 tracks for Columbia, including another big hit, Soudan. They returned to America in July of 1920. They signed a new record contract with Okeh, but the public began to tire of them and they never regained the sales or popularity of their initial success. The group broke up in 1925 after La Rocca suffered a nervous breakdown. The surviving members briefly re-formed in 1936 and recorded some sides for Victor. In 1940 the band re-formed yet again, but this time without La Rocca and recorded six sides for Bluebird and played up until 1940. Eddie Edwards formed a version of the band that recorded a V-Disc during World War II and for Commodore Records in 1945 and 1946. Tony Sbarbaro was the only other original member to perform on those sessions. (by redhotjazz.com)

The Original Dixieland Jazz Band was the first jazz group to record. Although their two earliest titles for Columbia (“Darktown Strutters Ball” and “Indiana”) have not been reissued in a long time, all of the ODJB’s output for Victor (including “Livery Stable Blues,” the first jazz recording ever released) is on this definitive CD. This colorful group, which stuck exclusively to ensembles with no solos, introduced such standard tunes as “Original Dixieland One Step,” “At the Jazz Band,” “Fidgety Feet,” “Sensation,” “Clarinet Marmalade,” “Margie,” “Jazz Me Blues,” “Royal Garden Blues,” and “Tiger Rag,” all of which are included on this release. It’s an essential acquisition for any serious jazz library. (by Scott Yanow) 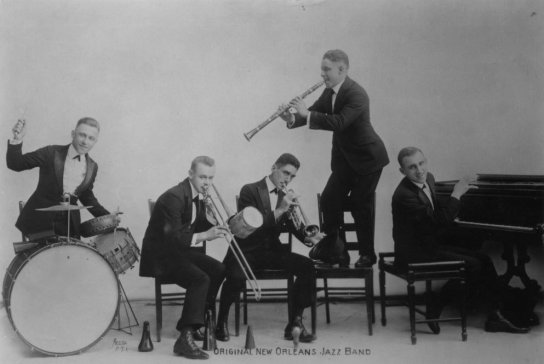 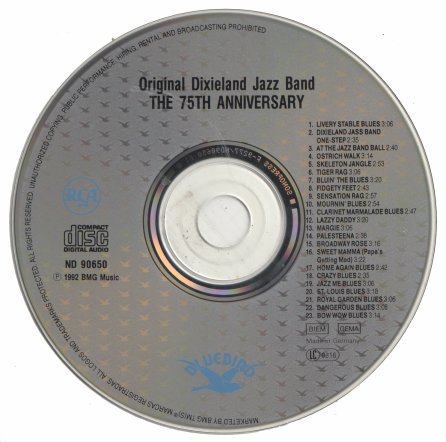 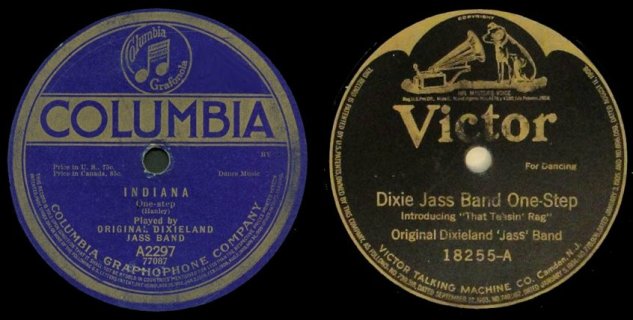