In Exile – Live is the first live album of THE BRANDOS from 1995, available for the first time as digipak edition! They owe their name to their love of Marlon Brando. Their fans know them as one of the most vital American live rock bands of the 20th century’s final decades. THE BRANDOS, known for timeless classics like “”The Solution”” and “”Gettysburg”” and their straight and true rock sound, were founded in 1986 with the line-up of David Kincaid (voc, g, mand, banjo), Ed Rupprecht (g), Larry Mason (dr) and Ernie Mendillo (b, voc) in New York City. The voice of Dan Kincaid was always compared to John Fogerty and Creedence Clearwater Revival and the catching live document In Exile – Live sounds exactly like one of the best American bands from the 60s. The album which contains 18 tracks was recorded with the line-up Dave Kincaid, Ernie Mendillo, Scott Kempner and Frank Funaro on December 20th and 21st, 1994 in Amsterdam and Utrecht (The Netherlands) and contains songs from the band’s studio albums plus the traditional “”The Recruiting Sergeant””.

This is one of the best albums that The Brandos have yet to produce. There are very few rock bands today that demonstrate the versatility, musicianship, and song writing capabilities as The Brandos. This is a great first album for someone who is unfamiliar with their work to purchase since it demonstrates their creativity and original music. As I noted in a previous review of The Brandos, they are (for my money) the best group around. (Roger M. Longo)

One of the most underrated bands of all time ! 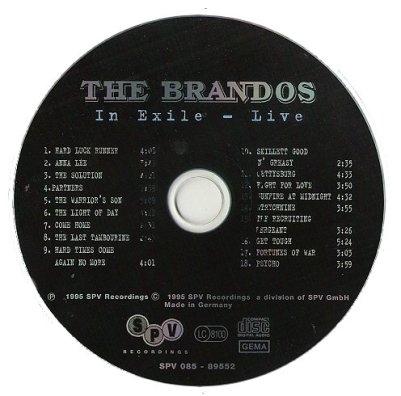 More from The Brandos: 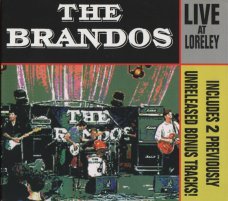 The Brandos achieved commercial success in the United States in 1987 with the release of their first album, Honor Among Thieves and the single “Gettysburg”. They have also established a strong fan base in Europe, where they have done promotion and extensive touring since the late 1980s. They have occasionally made it high on the record charts in countries such as the Netherlands.

In 2010 the recordings from the 2004 Irish Tour were mixed and the live album David Kincaid and The Brandos – Live in Europe was released on Dec. 1, 2010 and distributed in Europe by Blue Rose. The only current member of The Brandos is singer, guitarist and songwriter Dave Kincaid.

The passion, grit and power of New York’s The Brandos has origins in the Seattle scene of the early eighties. In the fall of 1984, Dave Kincaid and Larry Mason were playing the Seattle club circuit as members of The Allies. With a local radio hit (‘Emma Peel’), critically acclaimed recordings, and a video under their belts. At the same time, New Jersey based Soul Attack (with Ernie Mendillo and Ed Rupprecht) were playing gigs in and around their home state, with occasional jaunts into New York City. They had also made and released a local record in 1984.

Frustrated with The Allies’ lack of success, Kincaid decided to move to New York in 1985. Immediately upon arrival Kincaid began scouring the local music papers, namely the Village Voice, looking for a new band. Soul Attack had just lost their principal singer and songwriter, and had just placed an ad looking for a replacement. Kincaid joined the band and they eventually changed their name to The Brandos and performed their first show on February 14, 1986. Featuring Kincaid on vocals and guitar, Ernie Mendillo (bass, vocals), Ed Rupprecht (guitar), and Larry Mason (drums), the band began playing most of New York’s most renowned clubs such as CBGB, Tramps, The Bitter End and Kenny’s Castaways. The band also spent one month touring the Pacific Northwest. By October they had enough material for an album. While recording, the band continued to perform in the New York area, along with a brief tour of Germany in May 1987.

The Brandos released their debut album, Honor Among Thieves, on Relativity Records in late August 1987. The album spent 19 weeks in the Billboard charts and peaked at No.108 in late October. During this period, the band began touring the U.S. and Europe, opening for well-known bands such as The Georgia Satellites, INXS, The Cars and The Alarm. Their first video was released and was placed in medium rotation on MTV. The favorable reviews began to pour in: the Gavin Report dubbed them “Best new American band”, Rolling Stone magazine ran a full-page story describing them as “Real contenders”, and Time magazine clinched it with their quote “The Brandos’ roots run deep and offer great nourishment”. In early 1988, the band won Best Album (Independent Label), and Kincaid was honored with Best Male Vocalist (Independent Label) at the New York Music Awards. The Brandos also left Relativity that year and signed with Geffen Records. Their relationship with Geffen was strained from the outset and the group ended up at RCA Records in 1989. After a massive corporate restructuring, RCA dropped The Brandos upon completion of their second LP, Trial by Fire (unreleased), in 1990.

The better part of 1991 was spent writing and recording new material for a new album that would become Gunfire at Midnight, which would land a contract with SPV GmbH in Germany in the spring of 1992. Two singles from the album (‘The Solution’ and ‘The Keeper’) would reach the top 100 in the Netherlands. Extensive touring in Europe would follow, solidifying the band’s fan base even further, however Rupprecht and Mason decided to leave the band in 1993. The Brandos recorded their next album The Light of Day with the help of a few friends, especially ex-Del Lords members Scott Kempner (guitar, vocals) and Frank Funaro (drums, vocals). They filled out the live band, and an extensive tour and live album, recorded in Amsterdam in December 1994, followed. In 1996, The Brandos returned with Pass the Hat and Frank Giordano (guitar, vocals) replacing Kempner. The album marked a return to a more stripped-down guitar sound. Kincaid released a solo album, The Irish Volunteer, in 1997 but returned to The Brandos for another album (Nowhere Zone) in 1998 followed by two tours of Europe with the likes of Bryan Adams, Van Morrison, and Deep Purple.

1999 saw the release of Contribution: The Best of 1985-1999. The band continued to tour Europe over the next few years. (by wikipedia) 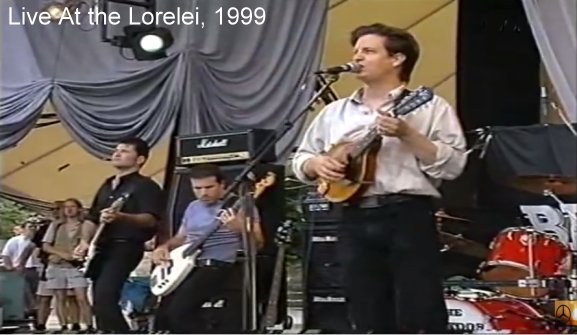 And here´s one of their high energy gigs … recorded live in Germany, 1999:

1999 the Brandos did another European tour with the line-up Dave Kincaid, Ernie Mendillo, Frank Giordana and Tom Engels. One of the anchor dates the four piece played a outdoor festival for German TV show “Rockpalast” at Loreley on July 9th. The ste included nine songs, two more live tracks have been added to the disc; “I got It”, a Little Richard cover, was recorded at the Stadsfest in Bremen, germany 1987, another one in 1998 at the Kongresshalle in Giessen, also in Germany. (by sonicrendezvous.com) 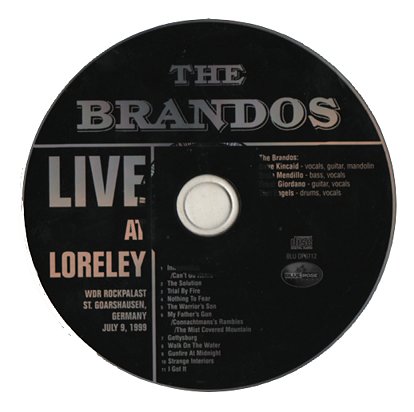 The Brandos are clearly unique. Their musicianship is superb and their ability to write creative music and lyrics, in my humble opinion, surpasses any group I have heard in the past 10 years. The Brandos started out as a West Coast band called The Allies (noted for a song called “Mrs. Peal” – the album title is “The Allies”and hailed from Washington State (like another superb group: The Ventures). There is also a tie between between these two groups in the sense that there are echos of The Ventures that one can find in the guitar work of their lead guitarist. The Brandos lead guitarist, David Kincaid, when asked by the European version of Rolling Stone what he thought was the best guitar solo in rock and roll he responded with Bob Bogle’s version of “Walk Don’t Run.” Bogle, who has passed away, was one of the founders of The Ventures and can be credited with starting the “surfing sound” of the 1960s.

Kincaid is clearly one of the best guitarists around with the flexibility to play multiple styles. He also plays the banjo and the mandolin superbly. One of the most interesting aspects of Kincaid’s guitar work is his ability to create a fusion between flamenco, classical, hard rock, country, Celtic influences, and folk. In fact Kincaid is recognized nationally for his preservation efforts regarding Irish folk music. Simply put, as a guitarist, this guy is an original. He’s The Brandos’ lead singer, lead guitarist, and a great song writer.

The album itself is excellent and I give it five stars (only because 6 stars was not available). This is an album that has general appeal as well as for musicians and lyricists who are looking some great music. As I noted above, The Brandos have very few peers as far as the contemporary music scene is concerned. 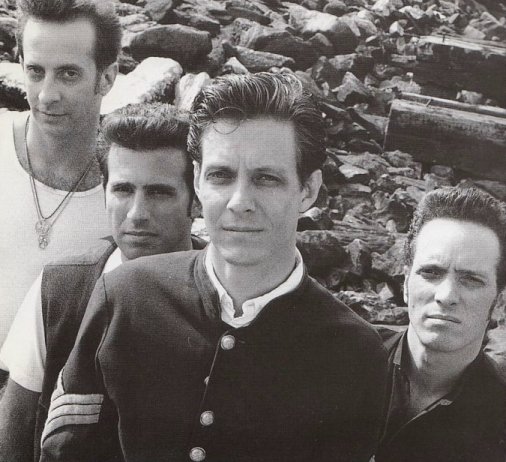 The Brandos got their start in New York City, but found that it was almost impossible to secure a recording contract without artistic and monetary concessions to those who control the contemporary music industry. They have moved their base of operations to Europe where their concerts are sold out.

The CD, as I noted above, is truly an excellent piece of work. Of the tracks on the CD my personal favorite is “Warrior’s Son.” Kincaid’s vocal is superb and the back up harmonies on the refrain are also excellent. If you enjoy this CD I can recommend The Brando’s “Honor Among Thieves” CD. On this CD is “Gettysburg” was, in my opinion, their breakout song. Other superb tunes include “A Matter of Survival,” “Nothing to Fear,” “Hard Luck Runner,” as well as other songs that could easily make the Top 40 if they had the air play on radio stations. The “Over The Border” CD is also a must. The title song (“Over the Border”) is one of the best tunes I’ve heard in years. They also do a superb version of “Guantanamera,” the vocals and guitar work are beautiful. I would also note the vocal harmonies on “The Triangle Fire” are second to none. Unfortunately most radio stations are subordinated to corporate interests and confine their play lists to the “stable of talent” they are currently promoting. Thus most folks have have never heard of The Brandos since there is no percentage for the industry in promoting a group who is not in the corporate fold. The Brandos took the high road and refused to compromise their music. This is why The Brandos CDs are imports and available on the internet rather than Walmart, Target, and other “meta-stores.” Sometimes you will find The Brandos’ CDs at one of the few “Mom and Pop” record stores, but these stores are increasingly rare. (by Roger M. Longo) 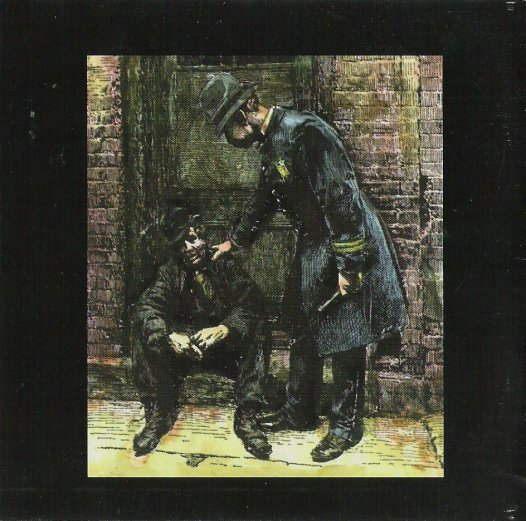 The Brandos 4th album “Light Of Day”, is a real treat. Many stylings by this band of New Jersey rockers. Led by David Kincaid he is one of the lost great American rockers, better known in Europe than his homeland (this is such a shame). He and his band in 1994 consisted of Larry Mason drums, Ernie Mendillo bass, and guitar help from James Mastro, Scott Kempner (The Dictators, Del-Lords), Rob Hertweck and Ed Rupprecht.
The album is full of great numbers in, “Turn Away”, “Not A Trace”, the magnificent title track, the mandolin soaked “Patty On The Turnpike/Exit 57”, the band really kicks it in to high gear halfway through, good stuff! The Irish soaked “Warrior’s Son”, with mandolin + penny whistle a real toe tapper. The roots rocking “The Hangin’ Tree”, brings to mind the latter period of the 1880’s. The Brandos rock on “Fight For Love”, Kincaid and the boys doing what they do best, and the album ends with the Stephen Foster tune done a lot by Bruce Springsteen in his shows “Hard Times, Come Again No More”, a great rendition.
The booklet inside is a very entertaining. The Brandos should of been a well known band, but they got swept under the carpet like so many other talented bands. Give this one a try good American rock and roll. (by ScottE) 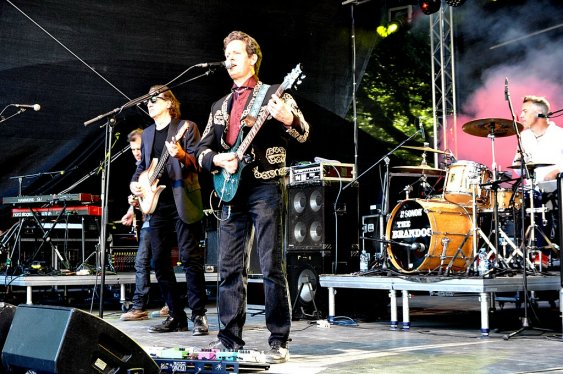