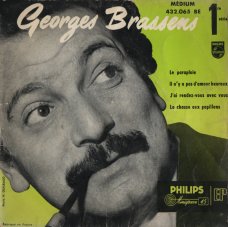 He wrote and sang, with his guitar, more than a hundred of his poems, as well as texts from many others such as Victor Hugo, Paul Verlaine, or Louis Aragon. In 1967, he received the Grand Prix de Poésie of the Académie française.

Between 1952 and 1976, he recorded fourteen albums that include several popular French songs such as Les copains d’abord, Chanson pour l’Auvergnat, La mauvaise réputation, and Mourir pour des idées. Most of his texts are black humour-tinged and often anarchist-minded.

Brassens rarely performed abroad. His lyrics are difficult to translate, though attempts have been made.[3] He accompanied himself on acoustic guitar. Most of the time the only other accompaniment came from his friend Pierre Nicolas with a double bass, and sometimes a second guitar (Barthélémy Rosso, Joël Favreau).

His songs often decry hypocrisy and self-righteousness in the conservative French society of the time, especially among the religious, the well-to-do, and those in law enforcement. The criticism is often indirect, focusing on the good deeds or innocence of others in contrast. His elegant use of florid language and dark humor, along with bouncy rhythms, often give a rather jocular feel to even the grimmest lyrics. (by wikipedia)

And here´s his first EP from 1954 … what a great piece of music … George Brassens was a very unique musician ! 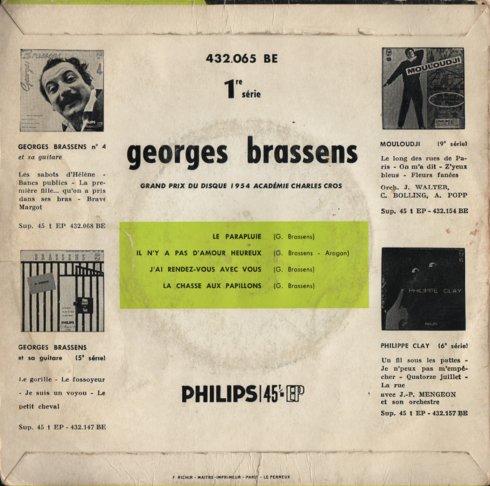