(Achille) Claude Debussy ( 22 August 1862 – 25 March 1918) was a French composer. He is sometimes seen as the first Impressionist composer, although he vigorously rejected the term. He was among the most influential composers of the late 19th and early 20th centuries.

Born to a family of modest means and little cultural involvement, Debussy showed enough musical talent to be admitted at the age of ten to France’s leading music college, the Conservatoire de Paris. He originally studied the piano, but found his vocation in innovative composition, despite the disapproval of the Conservatoire’s conservative professors. He took many years to develop his mature style, and was nearly 40 when he achieved international fame in 1902 with the only opera he completed, Pelléas et Mélisande.

Debussy’s orchestral works include Prélude à l’après-midi d’un faune (1894), Nocturnes (1897–1899) and Images (1905–1912). His music was to a considerable extent a reaction against Wagner and the German musical tradition. He regarded the classical symphony as obsolete and sought an alternative in his “symphonic sketches”, La mer (1903–1905). His piano works include two books of Préludes and two of Études. Throughout his career he wrote mélodies based on a wide variety of poetry, including his own. He was greatly influenced by the Symbolist poetic movement of the later 19th century. A small number of works, including the early La Damoiselle élue and the late Le Martyre de saint Sébastien have important parts for chorus. In his final years, he focused on chamber music, completing three of six planned sonatas for different combinations of instruments.

With early influences including Russian and far-eastern music, Debussy developed his own style of harmony and orchestral colouring, derided – and unsuccessfully resisted – by much of the musical establishment of the day. His works have strongly influenced a wide range of composers including Béla Bartók, Olivier Messiaen, George Benjamin, and the jazz pianist and composer Bill Evans. Debussy died from cancer at his home in Paris at the age of 55 after a composing career of a little more than 30 years.

Born in Montbrison in the Loire department of France, the son of an engineer, Boulez studied at the Conservatoire de Paris with Olivier Messiaen, and privately with Andrée Vaurabourg and René Leibowitz. He began his professional career in the late 1940s as music director of the Renaud-Barrault theatre company in Paris. As a young composer in the 1950s he quickly became a leading figure in avant-garde music, playing an important role in the development of integral serialism and controlled chance music. From the 1970s onwards he pioneered the electronic transformation of instrumental music in real time. His tendency to revise earlier compositions meant that his body of completed works was relatively small, but it included pieces regarded by many as landmarks of twentieth-century music, such as Le Marteau sans maître, Pli selon pli and Répons. His uncompromising commitment to modernism and the trenchant, polemical tone in which he expressed his views on music led some to criticise him as a dogmatist.

In parallel with his activities as a composer Boulez became one of the most prominent conductors of his generation. In a career lasting more than sixty years he held the positions of chief conductor of the New York Philharmonic and the BBC Symphony Orchestra, music director of the Ensemble intercontemporain and principal guest conductor of the Chicago Symphony Orchestra and the Cleveland Orchestra. He made frequent guest appearances with many of the world’s other great orchestras, including the Vienna Philharmonic, the Berlin Philharmonic and the London Symphony Orchestra. He was particularly known for his performances of the music of the first half of the twentieth century—including Debussy and Ravel, Stravinsky and Bartók, and the Second Viennese School—as well as that of his contemporaries, such as Ligeti, Berio and Carter. His work in the opera house included the Jahrhundertring—the production of Wagner’s Ring cycle for the centenary of the Bayreuth Festival—and the world premiere of the three-act version of Alban Berg’s Lulu. His recorded legacy is extensive.

He founded a number of musical institutions in Paris, including the Domaine musical, the Institut de recherche et coordination acoustique/musique (IRCAM), the Ensemble intercontemporain and the Cité de la Musique, as well as the Lucerne Festival Academy in Switzerland. (wikipedia)

Pierre Boulez made his early reputation as a Debussy conductor, and with good reason. Debussy’s reputation as a musical “impressionist” led most people to think of him as a sort of musical Claude Monet–all blurry outlines and fuzzy images–but Boulez changed this perception, bringing an analytical clarity and razor-sharp definition to the composer’s musical mosaics. What he has achieved in this second series of Debussy recordings is an additional naturalness and spontaneity of expression. The Cleveland Orchestra is the ideal vehicle for this sort of interpretation, being perhaps the most technically precise band in the world. The result is just about perfect. (by David Hurwitz) 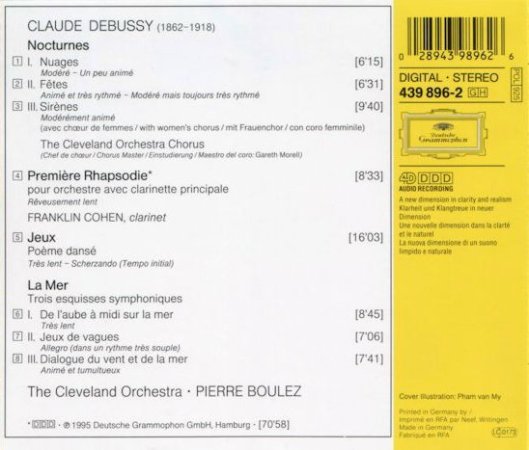 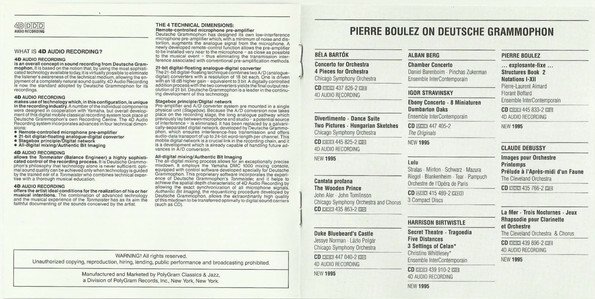 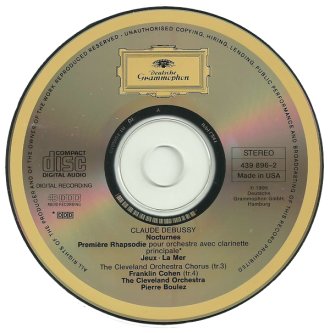