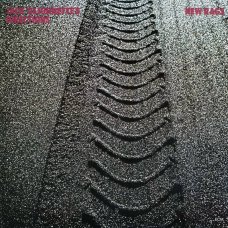 Today’s Rediscovery is an album that, despite never being released officially on CD, is a relatively regular play chez Kelman, getting spun at least a couple times every year. New Rags (ECM, 1977), the third—and, sadly, final—recording by drummer Jack DeJohnette’s Directions group, pares down the quintet of its second album and ECM debut to a quartet, where Cosmic Chicken bassist Peter Warren is replaced by Mike Richmond and keyboardist Warren Bernhardt is eliminated from the lineup after making his single set appearance with the group on Untitled (ECM, 1976).

The Chicago-born drummer is left, on New Rags, alongside guitarist (and fellow ECM label mate) John Abercrombie, lesser known but still busy session saxophonist Alex Foster and Richmond, another name less familiar to casual jazz fans but with a sizeable discography to suggest plenty of name power amongst musicians, It’s an album that, perhaps even more than its broad-scoped predecessor, succeeds in positioning DeJohnette as not just one of jazz’s most impressive drummers—even at this relatively early stage, about a decade into the then 35 year-old drummer’s career, having already clocked up two major gigs with Charles Lloyd and Miles Davis—but as a composer, instrumentalist and bandleader of increasing significance.

DeJohnette and Abercrombie were already good friends by this time, the guitarist having played on the drummer’s two Prestige dates: 1974’s Sorcery, as well as 1975’s Cosmic

But if Timeless explored a combination of keyboard-driven electricity and stripped down acoustic elegance, and Gateway found that unique nexus where Holland’s predilection for groove met with the freewheeling trio’s collective improvisational chemistry, New Rags explores three DeJohnette compositions of remarkable diversity, along with Foster’s more harmonically ambiguous but potently swinging “Flys,” and “Steppin’ Through”—the rocking, near (but not quite) fusion powerhouse that closes the album on a supremely fiery note, moving from pedal- to-the-metal intensity with Foster’s opening salvo to more spacious, open terrain, only to return to its unrelenting, riff-driven intro for a solo from Abercrombie. Overdriven and unfettered, it’s one of the guitarist’s best of the set—pushed to even greater extremes by DeJohnette’s cymbal-heavy power groove before the entire quartet brings things down for an ultimate fade-out.

One of DeJohnette’s most enduring qualities as a writer throughout the years has been a wry sense of humor, which has imbued many of his best compositions, including “One for Eric” and “Zoot Suite,” both from the drummer’s eponymous 1980 debut of the twin-saxophone (and occasionally trumpet)-driven Special Edition group, whose four ECM recordings were reissued in one of the label’s Old & New Masters Edition boxes, Special Edition, in 2013. New Rags may wax lyrical on “Lydia,” a gorgeous ballad named after the drummer’s wife that features DeJohnette on piano, but on his episodic title track, DeJohnette drives his group to shift gears seamlessly between ambling free bop, challenging stop/start compositional segues with brief moments of bump-and-grind burlesque…and an irregularly metered calypso ending that may seem like a non sequitur but, ultimately, makes perfect sense in DeJohnette’s stylistically unbound musical universe.

It’s not particularly uncommon for drummers to play piano, but few are as good as DeJohnette, who could easily have focused his energy on that instrument rather than drums with similar success…but we’ll never know, as it’s an instrument he only brings out occasionally. Still, when he does—as he does here on “Lydia” and later on the even more memorable “Silver Hollow”—a standout track on the subsequent debut of his reconfigured New Directions group (with only Abercrombie remaining in the lineup) on its 1978 ECM debut of the same name—he invariably demonstrates a particular penchant for melodic specificity.

The lengthy, open-ended “Minya’s the Mooch”—named after his then-young daughter and a play on “Minnie the Moocher,” made famous by Cab Calloway—opens the album with an elliptical, visceral bass line from Richmond that anchors an atmospheric collection of delicate cymbals and volume pedal-swelling guitar. Foster enters with powerful aplomb, ultimately pushing the group first towards double time energy, but then dissolving into a melée of apparent chaos—except for the cued figure that reveals more method than madness—before a closing section that returns to the more ethereal atmospherics of the intro.

How the entire group moves through these various passages as one is what makes Directions such a memorable group that, building on the success of Untitled, delivers an even more impressive sophomore effort. What’s less impressive is that both Untitled and New Rags remain unavailable—and would make a perfect double-disc set to bring all of DeJohnette’s albums as a leader on ECM into print on CD. Until then, both albums—both worthy of Rediscovery, but with New Rags beating out Untitled by a hair— are enjoyed, chez Kelman, in a vinyl>CDR transfer that sounds absolutely wonderful on the Tetra Listening Instruments. ECM’s painstaking attention to sonic transparency and pristine clarity is a particularly beautiful thing to behold here, on a record that covers considerable dynamic territory…and is all the better for it.

So, what are your thoughts? Do you know this record, and if so, how do you feel about it?(John Kelman) 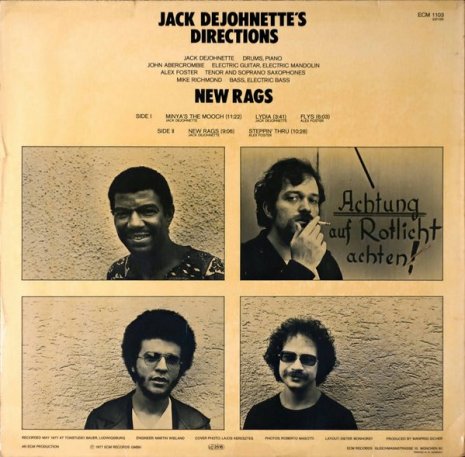 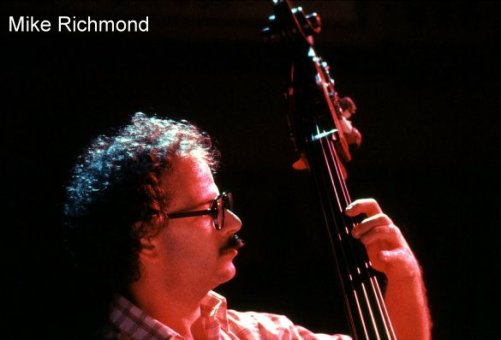