Hey Eugene! is the third full-length album from the band Pink Martini. It was released on May 15, 2007 by Pink Martini’s own record label, Heinz Records.

The album is named after the track “Hey Eugene”, a fan favorite at the band’s live concerts. As with most Pink Martini albums, Hey Eugene! features lyrics in several languages: French, Portuguese, Spanish, Japanese, Russian, Arabic, and English. The song Bukra wba’do, meaning ‘tomorrow and the day after’ in Arabic, describes a lover’s anticipation of a first date. 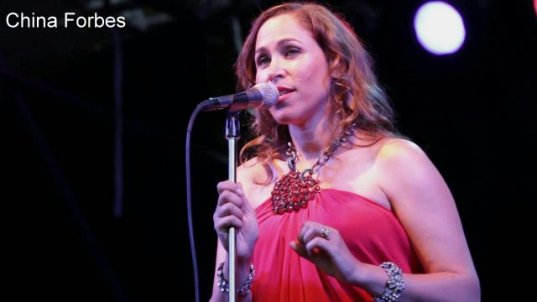 It took Pink Martini a full decade — their debut, Sympathique, came out in 1997; the follow-up, Hang on Little Tomato, was released in 2004; and now Hey Eugene! arrives in 2007 — but they’ve finally perfected their particular good-time blend of cabaret pop, pre-“world music” international fare, golden-age Hollywood scores, and lounge-informed, classy jazz. It’s still tempting to be wary of a group that wears its eclecticism so ostentatiously on its sleeve, but in the end nothing about the Oregon-based Pink Martini feels pretentious or mannered. While there is more than a taste of the tongue-in-cheek to China Forbes’ vocals, Pink Martini, a dozen strong, never come off as precious or stylized, as did so many of the bands that came along during the ’90s lounge revival and then disappeared from the planet.

While on one hand they fine-tune what it is they do, Pink Martini also expand their focus on their third album. The Latin elements of the first two albums are still present, no more so than on “Tempo Perdido,” a samba-rhumba written by Ataulfo Alves, originally sung by Carmen Miranda and abetted here by a high-school choir, but the group’s passport has many new stamps on it. “Bukra Wba’do,” originally sung by Egyptian star Abdel Halim Hafez, is PM’s first foray into the world of Arabic music, and the foamy “Taya Tan” is a sweet but somewhat foreboding Japanese pop confection. “Ojala” takes the group into French chanson; “Dosvedanya Mio Bombino,” obviously, leans Russian (great line: “I tried to storm the Kremlin of your heart”), but not so obviously also tilts toward various other Latinstrains from samba to son, which are touched upon elsewhere. Alternating between English (a touching, minimal “Tea for Two” with vocal jazz legend Jimmy Scott guesting; the opening, Forbes/Lauderdale-penned “Everywhere,” a lush ’40s-style torch song that could just as easily have been an old Judy Garland or Peggy Lee hit) and foreign-language vocals, Forbes is at ease in any situation. 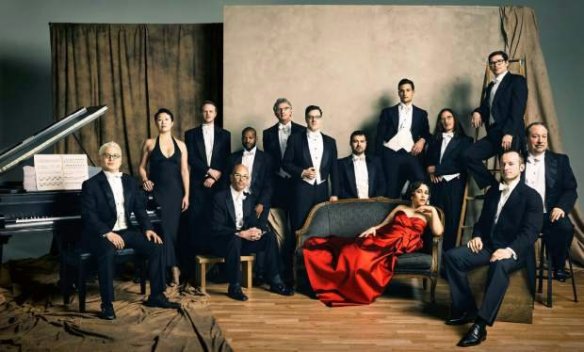 Bandleader/founder Thomas Lauderdale has become a masterful helmsman, guiding the core orchestra through its tricky, subtle paces. Ironically, the title track is the least interesting thing here, a slow-jam R&B bird-flip to a guy who took the singer’s number and never bothered to call. Such silliness isn’t becoming of the talent and originality on display all over Hey Eugene!, and they’d be wise to stick to the globe-hopping and genre-splicing in the future without resorting to downtown-styled faux coolness. (by Jeff Tamarkin) 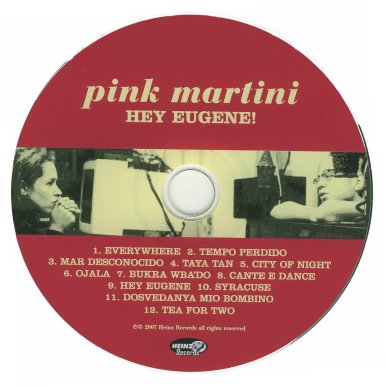 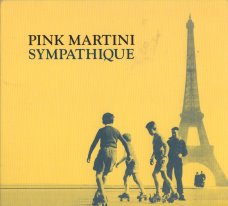 Sympathique, Pink Martini’s wildly popular debut album, was released in 1997. It has gone on to sell 975,000 copies worldwide and has taken the band around the world on tours to the Cannes Film Festival as well as Europe, Lebanon, Turkey, Japan and Taiwan, among other far-flung destinations.

The title track was nominated for “Song of the Year” in France’s Victoires de la Musique Awards. The album is Platinum in France, and Gold in Canada, Switzerland, Greece and Turkey.

Songs from Sympathique appear on numerous music compilations including Starbucks/Hear Music, Buddha Bar, Hotel Costes, West Elm, Façonnable, Putumayo, Nordstrom, Williams-Sonoma and in various films such as In the Cut, Nurse Betty and Josie & the Pussycats, and have been used on television shows such as The Sopranos and The West Wing, among others.

“Sympathique” was used in an advert for the Citroën Xsara Picasso car.

Pink Martini’s debut album incorporates an impressive variety of influences. Traces of Cuban music, cabaret, and film soundtracks are all discernible on Sympathique, an intriguing blend of contemporary pop painted with brass, strings, and percussion. (by Jason Ankeny)

The lyrics of Sympathique freely draw on Guillaume Apollinaire’s poem “Hôtel” from Le guetteur mélancolique. The French composer Francis Poulenc used the exact sentences from the poem as lyrics for his 1940 composition Banalités, FP 107 : II. Hôtel 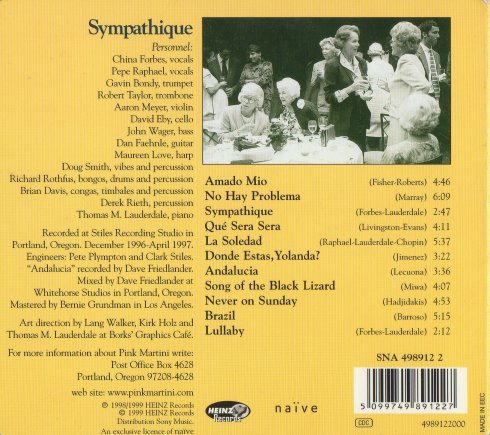