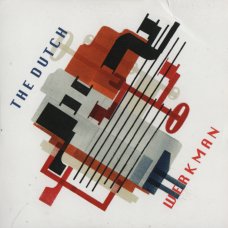 Interesting new album by Amsterdam new wave band The Dutch. That band had a few small hits in the Netherlands in the early 80s, but had disappeared since in the mist of time.

The Dutch are back together since 2014 …

This new album is a concept album or a song cycle Werkman, about Dutch painter and graphic designer Hendrik Nicolaas (H.N.) Werkman
Hendrik Werkman (1882 – 1945) was an experimental Dutch artist, typographer and printer. He set up a clandestine printing house in Groningen during the Nazi occupation (1940–45) and was shot by the Gestapo in the closing days of the war.

Werkman was a member of the Groningen artists’ group De Ploeg (“The Plough”), for whom he printed posters, invitations and catalogues. From 1923 to 1926, he produced his own English-named avant-garde magazine The Next Call, which, like other works of the period, included collage-like experimentation with typefaces, printing blocks and other printers’ materials.

Werkman would distribute the magazine by exchanging it for works by other avant-garde artists and designers abroad and so kept in touch with progressive trends in European art. Among the most fruitful contacts were with Theo van Doesburg, Kurt Schwitters, El Lissitzky and Michel Seuphor, the last of whom exhibited prints of his in Paris. (by wikipedia)

Werkman is the fifth album by The Dutch. A mini-album this time, named after the Dutch artist Hendrik Nicolaas Werkman (1882-1945). Most songs on the album are inspired by De Ploeg (“The Plow”), a group of artists from Groningen, the Netherlands, who explored a unique kind of expressionism in the first half of the 20th century. H.N. Werkman was one of the leading members of De Ploeg. As De Ploeg was founded in 1918, 2018 marks the centenary of this avant-garde collective. So Long H.N. Werkman, the first song on the album and also the first single, is an homage to the printer, painter and artist who never ceased to inspire his colleagues to seek new ways of making art. The song reflects his adventurous nature, his optimism and the color richness of his “druksels”. In the song, Job Cohen, the former mayor of Amsterdam, reads one of Werkman’s Dadaist poems.

Other songs on the album that are inspired by H.N. Werkman or De Ploeg are Sunday Afternoon (Hello Sunshine) and Spellbound (dedicated to Jan Wiegers).

Completing the album are Out Of Your Mind, in which a row of books are feeling bored and wondering when their owner will have time to read one of them, instead of gaming and Netflixing and sitting in front of screens all the time; and By And By Astray, in which The Dutch make fun of themselves and wonder if they would be better off if they started juggling careers.
The last song on the album is a reprise of Sunday Afternoon (Hello Sunshine). In the original song, the sun is shining and everybody is hunky-dory, but there is a gloomy atmosphere around the corner; in the reprise the clouds have all disappeared and there is a feeling of optimism – the optimism of De Ploeg.

And in the song, Werkman’s dadaist poem is read by Job Cohen, who was the mayor of Amsterdam for over a decade. Cohen discovered his talent for reading prose and poetry only a few years ago, when he read books for his wife who was severely ill.

A great tribute album to Hendrik Nicolaas (H.N.) Werkman … Indie Pop/New Wave/Power Pop … called what you like …  I call it good music from the Dutch music scene today !