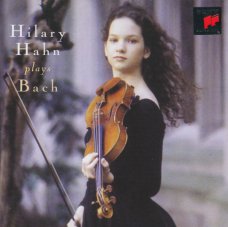 Hilary Hahn (born November 27, 1979) is an American violinist. In her career, she has performed throughout the world both as a soloist with leading orchestras and conductors and as a recitalist. She also built a reputation as a champion of contemporary music. Several composers have written works especially for her, including concerti by Edgar Meyer and Jennifer Higdon and partitas by Antón García Abril.

Hahn was born in Lexington, Virginia on November 27, 1979. She began playing the violin one month before her fourth birthday in the Suzuki Program of Baltimore’s Peabody Institute. She participated in a Suzuki class for a year. Between 1985 and early 1990 Hahn studied in Baltimore under Klara Berkovich. In 1990, at ten, Hahn was admitted to the Curtis Institute of Music in Philadelphia where she became a student of Jascha Brodsky. Hahn studied with Brodsky for seven years and learned the études of Kreutzer, Ševčík, Gaviniès, Rode, and the Paganini Caprices. She learned twenty-eight violin concertos, as well as recital programs, chamber works, and assorted showpieces. 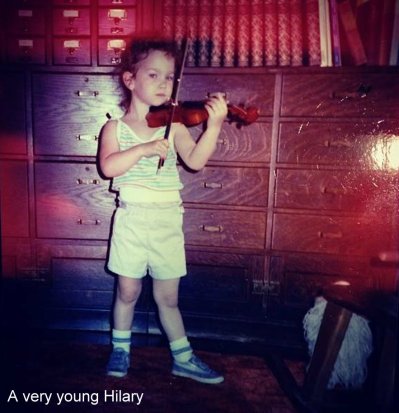 In 1991, at the age of eleven, Hahn made her major orchestral debut with the Baltimore Symphony Orchestra.[4] Soon thereafter, Hahn debuted with the Philadelphia Orchestra,[5] Cleveland Orchestra, Pittsburgh Symphony Orchestra, and the New York Philharmonic. Hahn made her international debut in 1994 performing the Bernstein Serenade in Hungary with Ivan Fisher and the Budapest Festival Orchestra. Her German debut came in 1995 with a performance of the Beethoven Violin Concerto with Lorin Maazel and the Bavarian Radio Symphony Orchestra. The concert was broadcast in Europe. A year later, Hahn debuted at Carnegie Hall in New York City as a soloist with the Philadelphia Orchestra. In a 1999 interview with Strings Magazine, Hahn cited people influential to her development as a musician and a student, including David Zinman, the conductor of the Baltimore Symphony and Hahn’s mentor since she was ten, and Lorin Maazel, with whose Bavarian Radio Symphony Orchestra she performed in Europe.

By sixteen, Hahn had completed the Curtis Institute’s university requirements, but elected to remain for several years to pursue elective courses, until her graduation in May 1999 with a Bachelor of Music degree.[3] During this time she coached violin with Jaime Laredo, and studied chamber music with Felix Galimir and Gary Graffman.[1] She appeared on Mister Rogers’ Neighborhood, in February 2000, discussing her early experiences with the violin and performing a solo and a duet.[9] In a December 2001 interview on PBS, Hahn stated that of all musical disciplines, she is most interested in performance. (by wikipedia)

… and here´s her debut album:

I do not know what Bach expected or envisioned in a performance of these pieces. But it is awfully hard to imagine him not appreciating this recording. Yes, I do grant what several people have said about Milstein’s Chaconne (in particular) being deeper in emotion, etc., but the pure, plain beauty of the sound produced by Hahn and recorded so cleanly by more modern technology (and evidently in a remarkably resonant space) has it own inherent value. It makes me focus on the genius of Bach’s very notes themselves, especially in the opening E major Partita. And if you listen carefully, I don’t see how anyone could characterize this performance as lacking in creativity – the dynamic range is fantastic, and along with the pacing seems to me to represent a real thoughtfulness about each phrase. I also find that the relatively relaxed tempi add to this effect of simplicity, purity, and beauty, and allow the composer, rather than the virtuosity of the performer, to take center stage. A great recording, in a different, not inferior, sense, when compared to the Old Classics. (David F. Jackson) 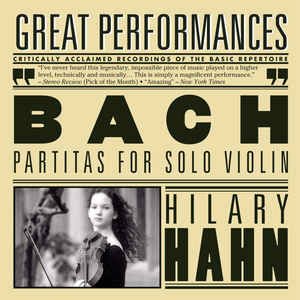 This recording must be heard to be believed.
Having listened to unacommpanied Bach for 45 years, I had long despaired of hearing it in tune, with love and precision.
I despair no longer.
Hilary Hahn is a treasure, who can can become the Michael Jordan of the violin.
We are privileged to share time with her on this planet. (Robert S. Eisenberg)

In other words: brilliant … and she was just 17 years old ! 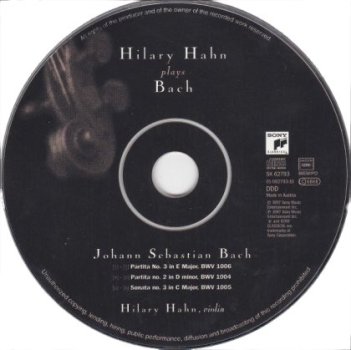