Witchfinder General formed in 1979 by Zeeb Parkes & Phil Cope in Stourbridge, England, as part of the new wave of British heavy metal movement during the early 1980s. They were strongly influenced by Black Sabbath, and are widely recognised today as one of the pioneers of the doom metal style. The band’s importance became acknowledged mostly after they disbanded.

The band (minus vocalist & writer Zeeb Parkes) reformed in November 2006, with new vocalist Gary Martin. In 2007 the band released Buried Amongst the Ruins, a compilation CD featuring the “Burning a Sinner” single, the Soviet Invasion EP, and four live tracks including a live version of the unreleased track “Phantasmagorical”. Whilst stating they would not perform live again, the band released their third full-length album, entitled Resurrected, in 2008.

Death Penalty is the debut studio album by British heavy metal band Witchfinder General. It was released in 1982 on Heavy Metal Records. The album received some criticism for the cover photograph, which featured topless model Joanne Latham. The photograph had been taken in the yard of St Mary the Blessed Virgin Church in Enville, Staffordshire, without the permission of the local Reverend. The album was originally released on LP and picture disc and was later reissued on CD. Pictured on the cover is Phil Cope, Zeeb Parkes, Graham Ditchfield and a member otheir road crew. While Peter Hinton is credited with producing this recording, the writers Phil Cope and Zeeb Parkes always felt the credit should have gone to the engineer Robin George. (by wikipedia) 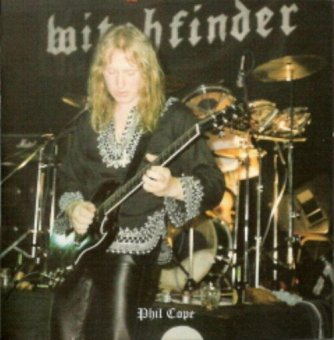 Unlike many of their New Wave of British Heavy Metal peers who injected their music with a certain punk attitude, Witchfinder General drank strictly from the Black Sabbath fountain. Their 1982 debut, Death Penalty, is a celebration of all things Sabbath — from the plodding rhythms of “Burning a Sinner” and “R.I.P.” to the early-Sabs intro of “No Stayer,” and even the band’s rocking “Paranoid” knock-off, “Free Country.” Singer Zeeb Parkes’ range is rather limited, but that never stopped Ozzy Osbourne, and his mostly satanic lyrics are especially amusing on the cryptic-sounding opener “Invisible Hate,” which eventually resorts to shouts of “more beer.” Despite similarly silly lyrics, the song that bears the band’s name is definitely the album’s highlight, thanks to its engagingly ferocious main riff. (by Eduardo Rivadavia)

All songs written by Zeeb Parkes and Phil Cope