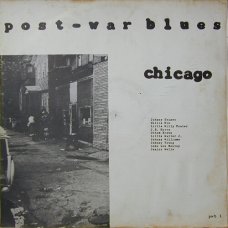 In 1945, the war was over, and a new world was dawning. The old-guard bluesmen were still names to respect, but there were fresh faces in town. Chicago had changed. The rural South was emptying into it again, and a new blues was being born.

Bluesman Muddy Waters and many others used to meet on Maxwell Street on Sundays, to play for the shoppers in the open air market. This is how many bluesmen new to Chicago started out. Many of the first recordings of the new blues were released on the label of a Maxwell Street store. Musicians like Moody and Floyd Jones, Johnny Young, Snooky Pryor and Sunnyland Slim played rough and ready blues which expressed the shock of life in the Windy City.

The workshops of Chicago Blues in the 40’s and 50’s were the clubs of the South and West Side ghettos: Theresa’s, Sylvio’s, Pepper’s Lounge, The 708, Smitty’s Corner, Gatewood’s Tavern, the Du Drop Inn. At the Zanzibar, female patrons sat entranced as the snake-eyed Muddy Waters sang ‘I wanna show all you good looking women just how to treat your man’. The classic Chicago line up of guitars, harmonica, piano, bass and drums was developed over years of tireless clubbing. Many private piano teachers sought clubbing gigs to take advantage of the popularity of the clubbing scene. And the perfected model of the rollercoasting blues band was demonstrated on the records of Muddy Waters, Howlin’ Wolf and their peers, mostly for the Chess label.

The glory years were the early fifties, the era of Muddy’s Hoochie-Coochie Man, Wolf’s Smokestack Lightnin’ and Jimmy Reed’s Ain’t That Lovin’ You, Baby – great songs and nationwide hits. Yet musical change was accelerating all the time, and by mid-decade the tight ensemble of Muddy’s band was being nudged aside by a radical new format, the subtler rhythms and more open textures of the bands led by young guitarists like Buddy Guy, Freddie King and Otis Rush – The West Side sound. Harmonicas gave way to saxophones, upright bass to electric, and guitar was coming into prominence as the autocratic leading voice.

There was more to the West Side sound than musical innovation. It’s intensity came from frustration and anger. “Hey, Hey, they say you can make it if you try”, sang Rush in his brilliant song Double Trouble, but added bitterly, “Some of this generation is millionaires – it’s hard for me to keep decent clothes to wear.”

It’s no coincidence that the West Siders were all guitarists. Amplified to the point of distortion, pushed to the limits of it’s potential, the guitar expressed more keenly than any other instrument the anguish and isolation of the black blues singer in white America. It was the music of a people who had gained little or nothing from the post-war prosperity. 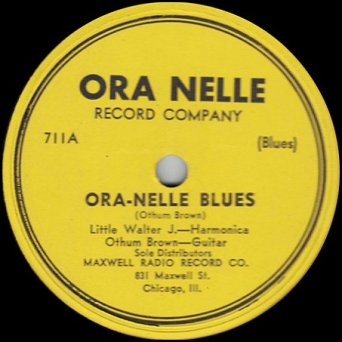 But at the same time it had a wealth of it’s own, ideas from new directions, it’s pulse and the freedom it gave it’s soloists was inspired partly by contemporary jazz. Rush listened to jazz guitarists Wes Montgomery and Kenny Burrell and organist Jimmy Smith. But the outstanding model for the West Siders and their Sixties successors Luther Allison and Jimmy Dawkins, was B.B. King. The intense, dramatic, highly strung vocal, interspersed with the guitar was a logical progression from King’s fifties work such as Three O’Clock Blues or Please Love Me.

In the years to come, it would be King, far more than Muddy or Wolf or anyone in the Chicago Blues establishment, who would influence the style of the city’s young musicians. (by archives.waiting-forthe-sun.net)