Upp was a British rock-jazz fusion band, active in the 1970s. The group was originally going to be called 3 UPP, and consisted of Stephen Amazing (bass guitar), Andy Clark (keyboards) and Jim Copley (drums). David Bunce (guitar) joined on guitar for the second album.

Stephen Amazing, aka Steve Fields prior to his career in Clark Hutchinson in his teenage years, used to play bass guitar in a band called ‘The Kinetics’, and also, at times, in another band called ‘The Abstracts’. Some photographs showing Fields in the Kinetics can be seen at Bill Chewter’s Facebook page.

Jim Copley has spoken of the genesis of the band; “Three months of rehearsing almost everyday, Jeff Beck came down to the studio to play with David Bowie who was doing his Hammersmith Odeon farewell concert in 1973. Jeff was with a friend of my dad’s and he heard the band through the wall and we were doing James Brown and very funky stuff. He kicked the door open and he came in and we stopped ’cause it was Jeff Beck and he said ‘please carry on, I love it, I love it!’. The band was heavily influenced by other acts like Otis Redding, Sly & The Family Stone, Stevie Wonder and Donny Hathaway.

The group were signed to CBS in 1974 and the debut album, Upp, was released in 1975. Jeff Beck produced and also played guitars on this LP, although there was no mention of him playing in the liner notes. Upp released its next album a year later, titled This way Upp. Beck again produced this album and played guitar solos on “Dance Your Troubles Away” and “Don’t Want Nothing to Change.” This album was recorded at CBS Studios, London.

The group backed Beck on the 1970s BBC One special Four Faces of Guitar, which also featured Julian Bream. They played two songs, which were “Get Down in the Dirt” and Beck’s arrangement of The Beatles’ song “She’s a Woman”, with an interview about Beck’s instrumentation as an intermission between the two.

A BBC radio recording was broadcast on BBC Radio 1 circa 1976.

The group’s track “Give It to You” contains one of the popular breakbeats of all time, and is featured in the Ultimate Breaks and Beats series. (by wikipedia)

If you try to find some information on this shortly lived UK quartet, about the only thing you’re liable to discover is that the group had a relationship with guitarist Jeff Beck (he produced their first LP and played on both of their studio releases).  There’s also a good chance that the online material will be in Japanese …  I don’t know why, but Beck and all of his side projects seem to have a massive Japanese following.  The absence of additional information is kind of surprising given the members’ extensive pre and post-Upp musical pedigrees.

Before forming Upp bassist Stephen Amazing and singer/keyboardist Andy Clark had previously been members of the progressive-oriented Hutchinson-Clark.  Drummer Jim Copley had been with Spreadeagle.

Expanded to a quartet with the addition of lead guitarist David Bunce, the group’s sophomore release “This Way Upp” was produced by Christopher Bond.  Musically the set wasn’t a major change in direction.  Like the debut Clark and Copley penned material like ‘Never Gonna Turn My Back On You’, Dance Your Troubles Away’, ‘Groovin’ Mood’ and ‘Get To the Bottom’ offered up heavily orchestrated white-boy pseudo-funk numbers.  Not a perfect comparison, but imagine Level 42 with more of a disco influence and you’d be in the right aural neighborhood.  Easy to picture folks dancing to this in their mid-1970s leisure suites and Saturday Night Fever attire.  Elsewhere the instrumental ‘Nitto’ showcased a jazzier, though no more original sound.  Unlike the debut, this time out Beck’s participation was limited to performances on a pair of tracks – ‘Dance Your Troubles Away’ and ‘Don’t Want Nothing To Change’.  Not bad and it should certainly appeal to a certain category of fans., though it didn’t do a great deal for me.  Elsewhere there was at least two singles off the album.  ‘Dance Your Troubles Away’ apparently never saw a US release, while I’ve never seen a stock copy of ‘Never Gonna Turn My Back On You’.
The original UK release sported a different and less interesting cover:

Unfortunately by 1977 their white funk sound had been overtaken by the public’s embrace of punk and new wave.  Shortly after the release of the second LP the band called it quits.

Clark reappeared as a member of Bill Nelson’s Be Bop Deluxe.

Copley showed up in a number of bands including Go West and Tears for Fears.

Under the stage name Zak Starstosky Bunce reappeared as a member of Driving Sideways.  He also got into producing commercial music and teaching guitar. 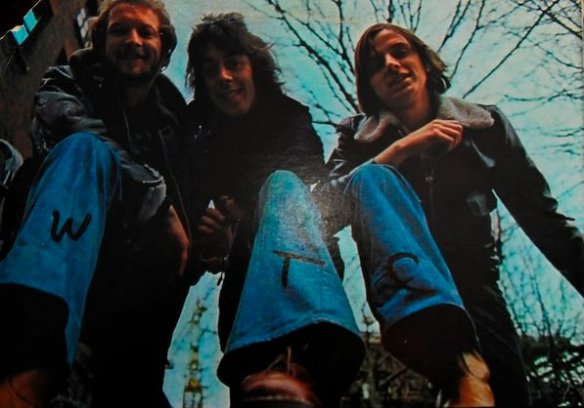 All songs written by Andy Clark 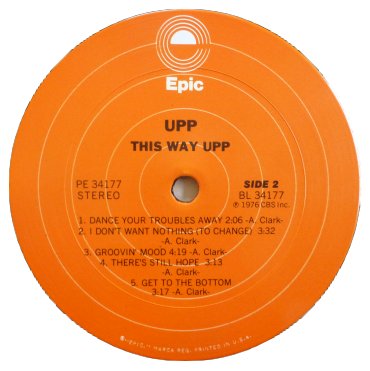