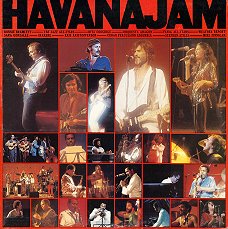 Havana Jam was a three-day music festival that took place at the Karl Marx Theater, in Havana, Cuba, on 2–4 March 1979. It was sponsored by Bruce Lundvall, the president of Columbia Records, Jerry Masucci, the president of Fania Records, and the Cuban Ministry of Culture.

In 1977, US President Jimmy Carter and Cuban President Fidel Castro started to loosen the political tension between the two countries and opened Interest Sections both in Havana and Washington. It was the first time in almost two decades after Castro’s rise to power that there was a real interest in establishing a normalization of diplomatic relations and the lifting of the United States embargo against Cuba.

With a real crisis in the music industry in the United States and the start of the salsa boom, in April 1978, CBS Records director, Bruce Lundvall, saw an open door to probe Cuban music and together with a group of the company’s music enthusiasts made a four-day trip to Havana, where they were overwhelmed by the sound of Cuban music, but especially by Afro-Cuban jazz band Irakere, one of Cuba’s most highly regarded and virtuoso musical acts.

After months of talks, Lundvall managed to sign Irakere and in July the group traveled to New York to perform an unannounced guest set at the famed Newport Jazz Festival-New York. Rave reviews led to an invitation from the prestigious Montreux Jazz Festival in Switzerland.

A few months later, Irakere won their first Grammy with the album Irakere, recorded at their Montreux Jazz Festival and Newport Jazz Festival performances, and Lundvall wanted to try his luck with other Cuban bands too. So, in the Fall of 1978, he joined forces with Fania Records director Jerry Masucci and convinced the Cuban cultural authorities to organize a three-day festival in Havana with the participation of Cuban and American musicians. The event would be recorded and televised for the enjoyment of both the Cuban and American people.

So they all agreed to set a date for the festival, spontaneously entitled Havana Jam. March 2 through 4, 1979, were the days earmarked for this historical step toward establishing a cultural exchange between the two enemy nations. In order to carry out the Herculean task of planning, Lundvall brought aboard Jock McLean and Phil Sandhaus, of Columbia’s artists development department. Both veterans of major concert promotion, they knew the festival needed professional production of the highest caliber, and enlisted Showco (a Dallas-based concert production company) and Studio Instrument Rentals for the task.

At this point in time, Lundvall was diligently “feeling out” select members of the Columbia artist roster, all of whom were honored to accept the invitation to perform in Cuba. By early February the talent was confirmed. Representing the U.S. would be Billy Joel, Stephen Stills, Weather Report, Kris Kristofferson with Rita Coolidge, the Fania All-Stars and the CBS Jazz All-Stars. The latter group was conceptualized by Lundvall and scheduled to feature more than 20 top jazz artists on the label.

With the festival within grasp, other CBS Records personnel were summoned into the picture-rehearsals were set up for the CBS Jazz All-Stars, travel accommodations were made, equipment was rented, a wide cross-section of media was invited, and both recording and videotaping plans were confirmed.

Record producers Bert deCoteaux and Mike Berniker flew down with a crew from the CBS Recording Studios along with a support team and mobile 24-track Recording Studio from Record Plant NY.

Engineered by David Hewitt with Phil Gitomer and Michael Guthrie. McLean, Sandhaus, Freston and various other people were already busy working in Havana’s Karl Marx Auditorium when the musicians landed at the José Martí airport on March 1.

Havana Jam was an invitation-only event, with mostly cultural personalities and members of the Communist Party and their children in attendance, though some students from different art and music schools were also invited.

The festival was hardly mentioned on the Cuban press, and thirty years later not many Cubans know it ever existed. (by wikipedia)

In 1979 many of Columbia’s top recording artists made a rare visit to Cuba where they performed (and recorded) at a series of concerts with some of the top Cuban groups. This double LP (unlike the strictly jazz Havana Jam 2) covers a wide range of music from Weather Report, the CBS Jazz All-Stars (an allstar group with Dexter Gordon, Stan Getz and Woody Shaw) and The Trio of Doom (John McLaughlin, Jaco Pastorius and Tony Williams) to Irakere, Stephen Stills, Kris Kristofferson and Rita Coolidge. There is enough worthwhile jazz on the two-fer to make this set worth picking up (by Scott Yanow).

What a great jam recording ! 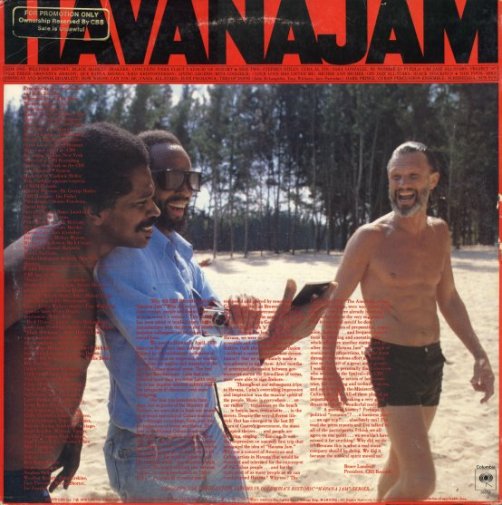 And now, I´m too lazy to search all other musicians … sorry …