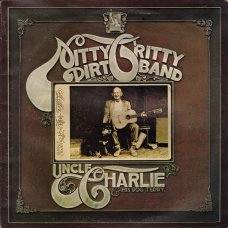 The Nitty Gritty Dirt Band is an American country rock band formed in 1966. The group has existed in various forms since its founding in Long Beach, California. Between 1976 and 1981, the band performed and recorded as the Dirt Band.

Constant members since the early times are singer-guitarist Jeff Hanna and drummer Jimmie Fadden. Multi-instrumentalist John McEuen was with the band from 1966 to 1986 and returned during 2001, staying 16 years, then departing again in November 2017. Keyboardist Bob Carpenter joined the band in 1977. The band is often cited as instrumental to the progression of contemporary country and roots music.

The band’s successes include a cover version of Jerry Jeff Walker’s “Mr. Bojangles”. Albums include 1972’s Will the Circle be Unbroken, featuring such traditional country artists as Mother Maybelle Carter, Earl Scruggs, Roy Acuff, Doc Watson, Merle Travis, and Jimmy Martin. A follow-up album based on the same concept, Will the Circle Be Unbroken: Volume Two was released in 1989, was certified gold, won two Grammys, and was named Album of the Year at the Country Music Association Awards.

The 1994 CD version has the title Uncle Charlie And His Dog on the spine. (wikipedia)

The first album issued by the Nitty Gritty Dirt Band after they had temporarily disbanded in 1969, this greatly expanded their pop audience, due primarily to the Top 10 hit cover of Jerry Jeff Walker’s “Mr. Bojangles” (which actually wasn’t a hit until early 1971). The group moved into a more accessible rock-oriented fusion of country, bluegrass, pop, and rock & roll, relying primarily on smartly chosen covers of tunes by the likes of Walker, Mike Nesmith, Randy Newman, and Kenny Loggins. Few bands had incorporated instruments more commonly associated with country and bluegrass, particularly mandolin and banjo, as comfortably into a rock setting prior to this release, and their well-crafted harmonies help put the songs over for those not-steeped-in backwoods sounds.

It was an extremely diverse program for a country-rock album, too, moving from rustic instrumentals and snippets of tapes of elderly musicians performing rural Americana to the Buddy Holly cover “Rave On.” The group were actually at their best, though, when doing softer, melodic pop tunes. “Mr. Bojangles” was a deserved huge success in that regard, but Nesmith’s “Some of Shelley’s Blues” and Loggins’ “House at Pooh Corner” were almost as catchy and appealing. (by Richie Unterberger) 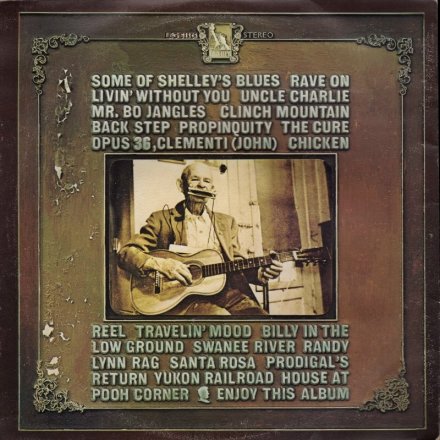 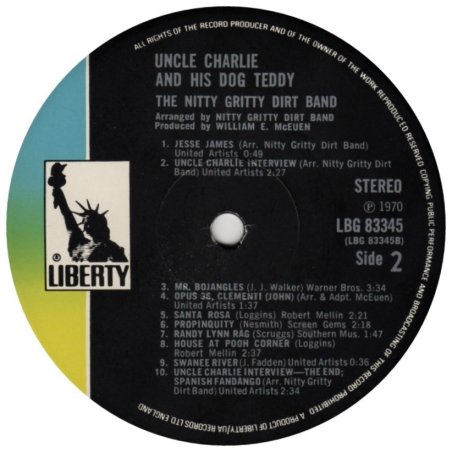 The Nitty Gritty Dirt Band was founded around 1966 in Long Beach, California, United States, by singer-guitarist Jeff Hanna and singer-songwriter guitarist Bruce Kunkel who had performed as the New Coast Two and later the Illegitimate Jug Band. Trying, in the words of the band’s website, to “figure out how not to have to work for a living,” Hanna and Kunkel joined informal jam sessions at McCabe’s Guitar Shop in Long Beach. There they met a few other musicians: guitarist/washtub bassist Ralph Barr, guitarist-clarinetist Les Thompson, harmonicist and jug player Jimmie Fadden, and guitarist-vocalist Jackson Browne. As Nitty Gritty Dirt Band, the six men started as a jug band and adopted the burgeoning southern California folk rock musical style, playing in local clubs while wearing pinstripe suits and cowboy boots. Their first paying performance was at the Golden Bear in Huntington Beach, California.

Browne was in the band for only a few months before he left to concentrate on a solo career as a singer-songwriter. He was replaced by John McEuen on banjo, fiddle, mandolin, and steel guitar. McEuen’s older brother, William, was the group’s manager, and he helped the band get signed with Liberty Records, which released the group’s debut album, The Nitty Gritty Dirt Band during 1967. The band’s first single, “Buy for Me the Rain,” was a Top 40 success, and the band gained exposure on The Tonight Show Starring Johnny Carson, as well as concerts with such disparate artists as Jack Benny and The Doors.

A second album, Ricochet, was released later during the year and was less successful than their first. Kunkel wanted the band to “go electric”, and include more original material. Bruce left the group to form WordSalad and Of The People. He was replaced by multi-instrumentalist Chris Darrow.

By 1968, the band adopted electrical instruments anyway, and added drums. The first electric album, Rare Junk, was a commercial failure.

Rare Junk is the third album from The Nitty Gritty Dirt Band, released in 1968. In an attempt to update their sound the band included electric instrumentation on the record, but it still was a commercial failure. (by wikipedia)

This, the group’s third album release, was actually an odds-and-sods type compilation of leftover tracks and singles that formed a respectable 10-song 30-minute plus LP. As a sign of just how strong the band was, it still represented a step forward from their second album, and is one of the great unknown albums of 1968. (by Bruce Eder)

Suzy Bogguss appears as guest vocalist on “Don’t Underestimate Love”. They also appeared on her 1992 album Voices In The Wind. (by wikipedia)

I love this album, right behind Live Two Five, on my list of favorites. Bobby’s “Losin You” is addicting. Ibby’s “Mother of the Bride” is a wonderful sequel to “Dance Little Jean”. Jimmy’s “The Dream” is another one of his winners and Jeff is always great. I remember these songs from their concerts in the late 80’s and early 90’s. I recommend this CD to anyone who loves the NGDB and misses the days when Ibby was with them. (an amazom customer)

Not an essential, but a good album … 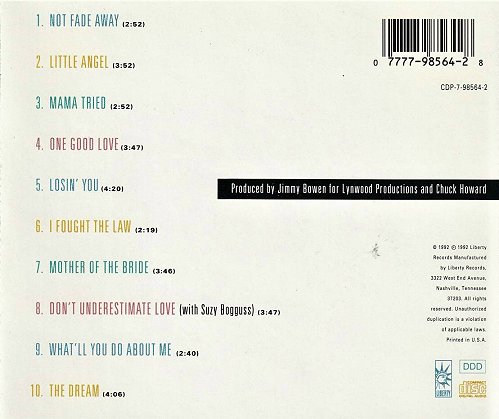