With Mott the Hoople, guitarist/vocalist Ian Hunter established himself as one of the toughest and most inventive hard rock songwriters of the early ’70s, setting the stage for punk rock with his edgy, intelligent songs. As a solo artist, Hunter never attained the commercial heights of Mott the Hoople, but he cultivated a dedicated cult following.

Hunter was born in Owestry, Shropshire, but was raised in cities throughout England since his father worked in the British Intelligence agency called MI5 and had to move frequently. Eventually, the family returned to Shrewsbury, where the teenaged Hunter joined a band called Silence in the early ’60s. Silence released an album, but it received no attention. In the years following Silence, Hunter played in a handful of local bands and worked a variety of jobs.

In 1968, Hunter began playing bass with Freddie “Fingers” Lee and the duo played around Germany. Shortly afterward, Hunter became the vocalist for Mott the Hoople. During the next six years, Hunter sang and played piano and guitar with the band, becoming its lead songwriter within a few albums. Although few of their records sold, Mott the Hoople was one of the most popular live bands in England. In 1972, David Bowie produced their breakthrough album, All the Young Dudes, which brought the band into the British Top Ten and the American Top 40. For the next two years, the group had a consistent stream of hits in both the U.K. and the U.S. 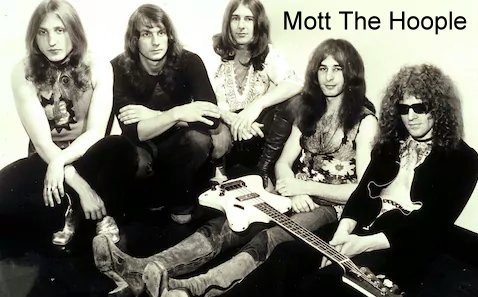 Toward the end of 1973, the band began to fall apart, as founding member and lead guitarist Mick Ralphs left the band. Hunter carried on through another album, but he left the group in late 1974, taking along former Bowie guitarist Mick Ronson, who had just joined Mott. Just prior to leaving the group, Hunter published Diary of a Rock Star, an account of his years leading Mott the Hoople, in June 1974.

Hunter moved to New York, where he and Ronson began working on his solo debut. Released in 1975, Ian Hunter spawned “Once Bitten, Twice Shy,” a Top 20 U.K. hit. Following its release, Hunter and Ronson embarked on a tour. After its completion, the pair parted ways, although they would reunite later in the ’80s. All-American Alien Boy, Hunter’s second solo album, was recorded with a variety of all-star and session musicians, including members of Queen. Released in the summer of 1976, All-American Alien Boy was a commercial failure. It was followed in 1977 by Overnight Angels, an album that saw Hunter moving closer to straightforward rock & roll; disappointed with the completed album, Hunter decided to leave it unreleased in America.

Following the mainstream approach of Overnight Angels, Hunter became involved with England’s burgeoning punk rock movement, producing Generation X’s second album, 1979’s Beyond the Valley of the Dolls. For Hunter’s next solo album, he reunited with Mick Ronson, who produced and arranged 1979’s You’re Never Alone with a Schizophrenic. The album was a hit, especially in America, where it peaked at number 35. Hunter and Ronson set out on another tour, which resulted in the 1980 double live album, Ian Hunter Live/Welcome to the Club. In 1981, Hunter released Short Back N’ Sides, which was produced by the Clash’s Mick Jones.

Two years later, he released All of the Good Ones Are Taken. After its release, Ian Hunter

became a recluse, spending the next six years in silence; occasionally, he contributed a song to a movie soundtrack. In 1989, he resumed recording, releasing YUI Orta with Ronson. After its release, Hunter remained quiet during the ’90s, appearing only on Ronson’s posthumous 1994 album Heaven and Hull, and at tribute concerts for Ronson in 1994 and Freddie Mercury in 1992. Hunter returned to recording with Artful Dodger, which was released in Britain and Europe in the spring of 1997. After a Columbia/Legacy compilation titled Once Bitten Twice Shy offered a wealth of Hunter solo titles in the year 2000, much attention was paid to 2001’s fine Rant. In 2002, Hunter performed a pair of semi-acoustic concerts in Oslo, Norway, which were recorded for later release on CD and home video; the resulting project, called Strings Attached, introduced some new songs, including “Twisted Steel,” inspired by the events of September 11, 2001.

Shrunken Heads, a collection of all-new material, was released in 2007 on the Yep Roc label, followed by Man Overboard in 2009 from New West Records. That same year, Hunter unexpectedly reunited with Mott the Hoople for a series of concerts at the end of the year; Live at HMV Hammersmith Apollo 2009 documented these well-reviewed gigs. After a couple of quiet years, Hunter returned in the fall of 2012 with When I’m President, another critically acclaimed collection of rock & roll. Live in the UK 2010, a document from the Man Overboard tour, arrived in 2014, and in 2016 Hunter released another studio album, Fingers Crossed. (by Stephen Thomas Erlewine)

And here´s a great show with Ian Hunter, featuring his old band mate from the Mott The Hoople dasys, Mick Ronson:

The newly re-christened Hunter-Ronson Band also toured incessantly, and Live At Rockpalast 1980 is a better document of this period than it really has any right to be. Recorded for a late-night television concert series from Germany’s Rockpalast, this concert displays both the short-lived band’s many strengths, but also a few of its weaknesses.

The late Ronson is definitely a great onstage foil for Hunter here, and his razor-sharp playing is much in evidence throughout this album. However, he also appears to be holding back at times. When the band launches into Mott the Hoople’s near-hit “All The Way From Memphis,” it lacks the 1970s glam-rock snarl of known live Mott recordings (even with the hapless Grosvenor). After Hunter sings “took out my six-string razor, and hit the sky,” you keep waiting for that great lead part from the original record. But it never comes. However, Ronson does add some impressive new lead guitar bits to the chorus. A version of “Once Bitten, Twice Shy” likewise falls just a bit short of the original version, although it is thankfully a bit grittier sounding than the ’80s polish of the Great White cover (“they taught us how to love”).

Songs like “I Wish I Was Your Mother” and “Irene Wilde” also display Hunter’s considerable talents as a songwriter cut straight from the Blonde On Blonde-era Dylan mold. This was something Hunter was trying to focus on more following his days as a 1970s glam-rocker with Mott, and although the songs are undeniably good, I have to admit I still found myself waiting for the band to bust out a bit more here.

Outside of Hunter and Ronson, there are a bunch of really non-descript players. Good at what they do, sure. But also lacking both the admitted sloppiness, yet undeniable explosiveness of what Mott the Hoople could do on a great night. It’s right about here that you really want to see Hunter strap on that giant “H” guitar, and kick some ass. Or at least, those ridiculous, knee-high boots worn by bassist Pete “Overend” Watts during Mott’s glammier days.

Fortunately, the band rallies somewhat to kick things up a notch with the rockers, including “Cleveland Rocks,” “Just Another Night,” “All The Young Dudes,” and especially a scorching version of “Bastard” from Hunter’s great Schizophrenic album. Here, the band falls into a tight-ass little funk pocket (well, outside of some misplaced synthesizer anyway), and Ronson gets a chance to flex his muscles on guitar a bit more. Ian Hunter also bites off the lyrical phrases to this song with all the fiery spirit of his obvious hero, Dylan. This performance alone is worth the price of admission.

Live At Rockpalast 1980 isn’t perfect, by any means. But it is still just about as good a document of Ian Hunter at his post-Mott the Hoople peak as one could have hoped for. It’s also a real treat to see Mick Ronson rock out on guitar, even if those moments are a little too fleeting on this album. (by Glen Boyd) 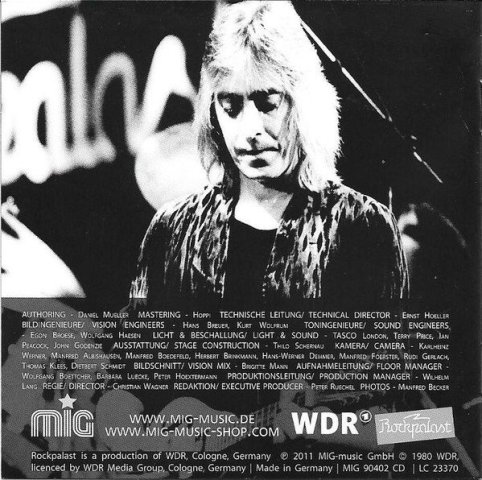 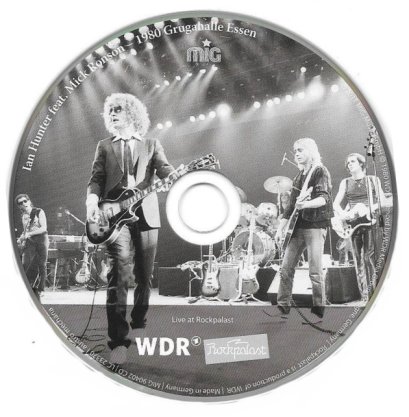 And here´s the show on video: