A prolific multi-instrumentalist, Klaus Schønning became one of Europe’s most well-known new age artists during the 1980s. Born in Copenhagen in 1954, he began composing music as a child and also played piano. He made the move to blues and rock while a teenager, but also studied musicology at college. Schønning debuted in 1979 with Lydglimt, and soon began broadening the palate of electronic synthesizer music with deft orchestrations and a large array of instruments including harp, zither, dulcimer, bouzouki, glockenspiel, and many guitars. Nasavu, released in 1982, was an early touchstone in the continuing growth of new age music. Schønning recorded often throughout the 1980s, and debuted a four-part series of Symphodysse works in 1989. His music has also appeared on the Hearts of Space collection Cruisers 1.0. (by John Bush)

This is a valuable collection for space music fans, as it contains four pieces from the classic Nasavu, an out-of-print Schonning title that really shined in the area of pop instrumental music. 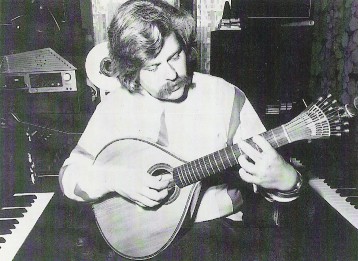 The first four pieces are from a different production, and the fifth piece, the epic title track, acts as a bridge between his Kitaro-esque sweeping style and the more rhythmic, guitar-laden end of Schonning’s musical spectrum. The 20-minute middle piece covers it all, with a recurring theme that will likely catch your memory banks in a most lingering manner. Lasting impressions are the key here, collectively created by Schonning on synthesizers, autoharp, kantele, piano and keyboards, and accordion, etc, plus drums and guitars on most tracks, with Schonning’s ear for the overall sound guiding the way. (allmusic)